21 Things You Didn't Know About BMW

Bayerische Motoren Werke was formed on March 7th, 1916 as BFW (Bayerische Flugzeugwerke), a company that primarily made airplane engines. In the century that followed, the company set records for altitude and speed, redefined an entire segment of the market, and dominated on racetracks around the world. Oh yeah, and it also built its very own Lamborghini and erected a 22-story homage to car engines. To celebrate the company's big 100th birthday, first we took a look at the all-time best BMWs from the past 10 decades. Then we dug deep, and found a whole bunch of things you probably didn't know about BMW.

1. BMW built the airplane engine the Red Baron wished he had

During WWI, there was an immense need for airplane engines, especially on the German side. So a little company called Rapp Motor merged with Otto Werke, an airplane maker just up the street in Munich, combining forces to satisfy the war effort's needs. Otto Werke was run by the son of the guy who made four-cycle engines useable -- which ultimately contributed to just about every car engine on the road. That same technology went directly into the engine that legendary fighter pilot the Red Baron called the greatest engine in WWI.

2. BMW's headquarters is a giant homage to its four-cylinder heritage

While the highest-performing BMWs from the past few decades tend to rely on six cylinders, so much of BMW's legacy revolves around outstanding four-cylinder engines that in the 1960s, an Austrian architecture professor designed BMW's global HQ to pay tribute to the four.

Aside from plenty of records for speed, and even helping an airboat circumnavigate the globe in 1932, this BMW-powered biplane hit 32,000ft in 1919. It was easily a record back then, and that's roughly the altitude you cruise at today while you're cursing your decision to fly Spirit.

4. Everyone thinks the iconic logo represents a spinning propeller. Everyone is wrong.

Contrary to popular belief, the logo existed before it ever graced a propeller. Call it a bloody-brilliant piece of marketing, call it a badass design that tricks the eyes, but don't call it the origin of the BMW roundel.

5. In reality, the roundel is a tribute to both Rapp Motor and Bavaria

That blue and white? Those are the national colors of the German state of Bavaria, not white propellers on a blue sky or whatever you've heard. I'm not saying saying it doesn't look incredible when affixed to the nose cone of a propeller, but, again, that's pure marketing fantasy. Rapp Motor* was one of the key companies on which Bayerische Flugzeugwerke was founded and when BFW became BMW in 1917, the roundel was a natural combination of Rapp's logo and the Bavarian colors.

*Interesting side note: the founder of Rapp Motor, Karl Friedrich Rapp, left the company when it became BMW but stayed in Germany until 1934, when he suddenly realized that living out the rest of his days in Switzerland was a pretty good idea. Draw your own conclusions.

6. You can thank the Treaty of Versailles for getting BMW into cars

After its second-place finish in WWI, Germany was prohibited from producing warplanes and warplane engines, as mandated by the Treaty of Versailles. With its business interests slashed almost all the way down to motorcycles, the company sought to diversify. Enter this little guy, the Dixi 3/15. It was a hit.

7. It didn't even design its first car, though

The Dixi was actually an English Austin. In America, Bantam built the same car. In Japan it was a Datsun. Austin designed and built the chassis to be used under license around the world, and several companies jumped at the chance to avoid the inherent development costs associated with making a car. That said, BMW's first dealership in Berlin was much, much nicer than its global competitors'.

8. In 1937, the world record for fastest motorcycle went to BMW

Yes, this motorcycle is essentially a death trap -- really, how do you dismount in an emergency without decapitating yourself in the process -- but it was aerodynamically slick, and supercharged.  In 1937, this thing was capable of 173.7mph. But again, the bodywork covered the rider. Go big or don't go home, I guess?

9. BMW was on the forefront of aerodynamics almost since the origin of the term

This 1940 328 Kamm Coupe (named after the father of German aerodynamicist Wunibald Kamm) was decades ahead of its time, aerodynamically. If it looks familiar, that's because Shelby American, Inc. employed the same principles to make the Cobra Daytona Coupe in the mid-1960s. Essentially, by chopping off the rear end, you can increase the straight-line speed by north of 30% -- a big deal when you're racing across Italy in the Mille Miglia. It's called a Kammback, and plenty of cars today, from Priuses (Prii?) to Corvettes, still use the principle.

10. BMW was also at the forefront of racing for lunatics

OK, BMW didn't exactly invent sidecar racing -- the concept of leaning out of a sidecar to improve cornering ability during a race dates almost as far back as the concept of sidecars themselves. But BMW's riders were evidently born with a serious problem with their amygdalas. Case in point: this nutter's not even wearing facial protection other than goggles.

11. In the late '50s, BMW almost became part of the same corporate family as Mercedes

Collectively, BMW shareholders said "f*ck that noise" (an approximate translation from the German) and mounted a counter attack. Even the lowliest mechanics helped buy back shares. Eventually, a man by the name of Quandt took control; his family still owns a large chunk of the company today. This remains the major skirmish of the intense rivalry between Mercedes and BMW.

12. BMW's storied M1 supercar was supposed to be built by Lamborghini

BMW and Lambo agreed in the 1970s to build a race car. The Germans were supposed to provide the engine and some suspension bits, and the Italians were slated for the rest of the mid-engined beauty, penned by the incomparable Giugiaro.

At the eleventh hour, ostensibly for financial reasons, Lamborghini pulled out in one of the biggest that's what she said moments in corporate history. BMW cleaned itself off, went back to Germany, had private coachbuilder Baur handle Lambo's part, and the original BMW M car was born.

13. The M1's design family is hands down the strangest of all time

Forget the BMW-slash-Lamborghini origin for a second. Giorgetto Giugiaro designed the car, and he's kind of a legend. That means its father is the same guy that designed the DeLorean. And the Beretta U22 Neos handgun. And the Lotus Esprit. And the Nikon D4 camera. And the VW Golf. How a guy like Giugiaro could also design the Yugo is a mystery greater men than me have tried and failed to solve.

Although overshadowed by the atrocities of the Munich Olympics in 1972, BMW debuted an all-electric version of its popular and tremendously-important-in-its-own-right 1602. It used 12 batteries, and could drive for up to 19 miles at a time. It was an exercise in engineering rather than a marketable product, but considering it had less than 50hp, that's probably just as well.

BMW's M10 four-cylinder engine was an evolution of a motor that first hit the streets in 1962 with 75hp. By 1983, engineers managed to squeeze over 1,400hp out of it -- heavily modified, but still ostensibly based on that same original engine -- and Nelson Piquet won the world driver's championship with it. That's a Rudy-winning-the-Heisman level of impressive.

If you're planning on racing your classic BMW 328, presumably with a top hat and monocle, you can still buy a brand-new transmission for it via the BMW Classic program. That program is so thorough that a group of mechanics once built a factory-new 1976 R90S motorcycle by ordering all the parts online.

17. To build those classic parts, BMW bought back its old motorcycle factory in Munich

It's kind of poetic, if you think about it. They're gonna make a ton of new old parts for BMW Classic, inside a classic BMW building.

This first-class cabin for Singapore Air almost brings things full circle, back to BMW's early days of making aircraft engines. Of course, the only problem is the plane has to land eventually, and you'll get kicked out. 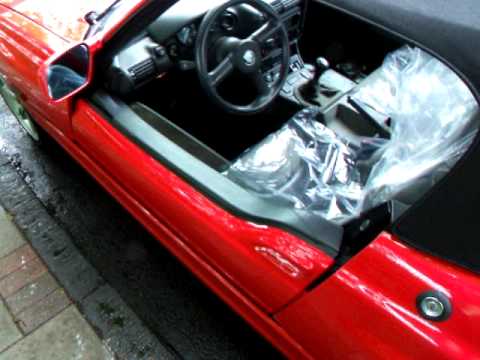 19. The BMW Z1 featured the coolest doors of any production car

It's not even close, especially when you consider the Z1 wasn't a zillion-dollar supercar. It's a shame there were only a little over 8,000 of 'em made.

It would have been weird, to say the least, but since it was only a design study it's kinda cool. What's actually neat about this car is you can see the Z3 coupe start to take shape in the back half of it, and it looks exactly like the kind of slick crossover SUV you wish would be built today.

Aaron Miller is the Cars editor for Thrillist, and can be found on Twitter. His E30 really is a LEGO kit, but like most kids, he keeps taking off and adding parts. He hopes to finish it one day.