Caterham's New Kobayashi Edition Is The Definition of Driving Purity

Since its inception, Caterham has always been about the purity of the driving experience, offering cars that have almost nothing but an engine, wheels, pedals and a steering wheel. Now, though, they've gone even further, pairing with their F1 race driver, Kamui Kobayashi, to deliver what's quite possibly the most pure Caterham you can buy today. It's called — wait for it — the Kamui Kobayashi Limited Edition.

It starts out as a Seven 250 R, which means it's got 125 hp — more than enough to get it moving in a hurry, considering that it literally weighs less than an NFL offensive line. The paint is high gloss black, with stripes and numbering in matte black, and British Racing Green-tinted carbon fiber trim adds very sporting touches everywhere else.

If you're familiar with Caterham at all, the fact that there's no top won't surprise you. Unless you count this thin strip of carbon fiber above the dashboard, though, there's not even a windshield. Translation: you're probably going to want to wear a helmet. The inside is as gorgeous as it is minimalistic, with that same green carbon and gloss black color combo, a handful of gauges and switches, a steering wheel....

... and that's about it. There's not even a passenger seat. That's probably for the best, though. With the kind of cornering prowess the Caterham is capable of, you don't need someone screaming next to you and grabbing onto your arm as if their life depended on it.

You might've expected it to be small, but just look at it parked next to Caterham's F1 challenger and you'll get the full scope of just how small the Seven really is. 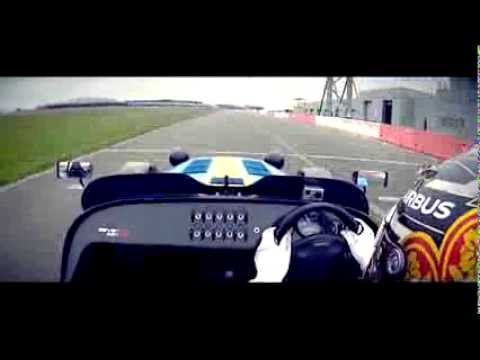 If anyone is going to be jaded, it's a guy who drives the best race cars on earth for a living, but for an idea of just how pure the Caterham really is, listen to Kamui describe his first experience in a Seven.

Not a bad choice for a daily commute, is it?

Aaron Miller is the Rides editor for Supercompressor. He's just crazy enough to use something like this as his daily driver.