Thanks, Dodge. We've seen spy shots and heard rumors for months that the carmaker was getting ready to drop an uber Challenger and throw down the proverbial gauntlet to its crosstown rivals at Ford and GM. Now they have. Meet the Dodge Challenger SRT Hellcat. It's just your average, run of the mill, supercharged Hemi-having, 600-plus horsepower modern muscle car. Nothing special.

You know, except for the massive hood scoop whose sole job is to bring as much cold air into the engine as possible. Or the hidden ram air intake that's in the middle of the driver's side running light. Or those vents on either side of the hood, which let air escape when you're driving at very high speeds so the front wheels can maintain contact with the ground. That's important.

Oh, and that supercharger? Yeah, it's the first time a Hemi has ever come from the factory with forced induction. They had to change 90 percent of the engine's components to prevent it from turning into a grenade the moment you get a little too enthusiastic with your right foot.

Slowing down from unrestrained use of the happy pedal requires some serious braking ability. Dodge stepped up to the plate, with 15.4 inch anchors that they say are the largest they've ever put on any car, including the Viper.

The car comes with a launch control feature to convert your tires into clouds, not to mention have a perfect start at every drag race, which you will definitely be doing on the track and never, ever from a red light, no matter how perfectly suited to it the system might be.

Probably the coolest feature on the car, though, is the valet mode. Turn it on, and nothing you've ever seen a valet do in a movie can possibly happen. The engine is drastically impaired and won't rev past 4,000 rpm, the transmission won't go into first gear and shifts up as quickly as possible, the paddle shifters are deactivated, launch control is shut off, and all the stability sensors are set to high alert. 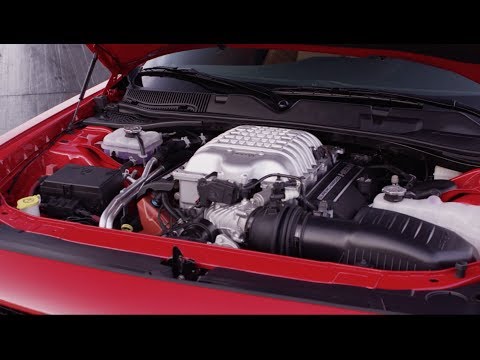 Until you come back, deactivate everything, and go straight to hell.

Aaron Miller is the Rides editor for Supercompressor. He was pleasantly surprised with how the 2014 SRT Challenger feels on track, so he's looking forward to trying this one.