29 Things You Didn't Know About the SR-71 Blackbird

Quantifying the exact level of badass-ness the SR-71 Blackbird achieved during its active career from the 1960s to the 1990s is impossible -- partly because, as a spy plane, much of its anecdotal history remains behind a veil of security. From its very first test flight, three days before Christmas in 1964, it straddled the boundaries between physics-bending speed and safety, top secret missions and public rockstar status, and even between Earth and space.

Now basking in its second decade of retirement, Blackbird stands as a towering figure in the history of aviation, one which still holds more than its share of records. These are 29 things you you (probably) didn’t know about the SR-71.

In July of 1976, the Blackbird celebrated the United States’ centennial by setting an outright speed record for a manned jet. This is that very plane landing after that record-setting run, and while a few pilots took their Blackbirds faster, they weren't on an official two-way record run.

The plane flew through the first of its two passes at a much, much higher speed than what was required to set the record. Just before start of the second pass, one of the engines shut down. Before the engine could be restarted, the plane was well beyond the start line. Capt. Al Joersz, the record-setting pilot, said, “By the time we’d gone through the checklist, we’d already passed the second gate [thus officially starting the run]. Still, we exited the gate at Mach 3.2.”

3. The very first Blackbird was built using Soviet titanium that the CIA smuggled into the US

Let that one sink in for a second. As it turns out, the USSR produced the finest titanium in the world, and since the landing gear and most of the plane’s skin is titanium, Uncle Sam had a national security-level need for Soviet titanium. Life's funny like that sometimes.

4. The engines are roughly as powerful as an ocean liner

No, not the old ones; the new 33 yard ones that the Patriots don’t like too much. The Blackbird is 105 feet long, which is absolutely huge for a two seat aircraft.

There were a few ways to start the J58, but one of them was hooking up a pair of Buick Wildcat V8s together and spinning the engine until it fires up. Each of those engines was good for 340 hp.

7. BF Goodrich had to develop special tires because it’s so heavy

It’s so damn heavy -- 170,000 pounds -- that BF Goodrich had no choice but to develop special aluminum-reinforced tires that could take the abuse, and even then, the life span was about 20 landings. Slowing that much mass down safely isn’t easy, so a parachute during landing helped scrub off speed so it wouldn't shoot past the end of the runway.

8. The founder of Polaroid was in charge of the team that evaluated the Blackbird’s design

If you think about it, it makes sense: the SR-71 was a spy plane, and Dr. Edwin Land knew a ton about photography.

9. Those cones in front of the jets are both incredibly complex and vitally important

They’re really part of the throttle control system, moving around to ensure the rate of airflow into the engine remains constant. Without them, too much or too little air rushing into the intake (airflow properties change at hypersonic speeds) can cause a near instantaneous and absolutely catastrophic loss of control.

Lockheed built the planes in Burbank, then loaded them onto trucks headed to everyone’s favorite conspiracy theory location.

11. To fly or even work on the plane, everybody was required to be married

You not only had to be between 25 and 40 years old and something called “emotionally stable,” you had to be married to even be eligible for consideration to work on the plane, let alone fly the damn thing. Testing in the desert north of all those Las Vegas wedding chapels makes a lot of sense now, huh?

12. The SR-71 is actually the third Blackbird

The A-12 (shown) is its extremely similar predecessor that also flew more than three times the speed of sound. Perhaps unsurprisingly, it was operated by the CIA.

13. This was the Blackbird's interceptor variant

It never reached full-on production, but the YF-12 evolved from the A-12 and ultimately led to the SR-71. After setting several speed records, the prototypes saw fruitful careers helping NASA with research.

14. For all its advanced tech, the Blackbird’s true worth was as a propaganda tool

LBJ made a public announcement that a 2,000 mph plane was in the works in February of 1964 -- fully 10 months before even the first test flight. Why go public with an untested, top secret spy plane? Presidential election rival Barry Goldwater had claimed the Soviets were getting a technological lead.

15. When LBJ announced the plane to the public, he changed the name -- maybe by mistake

He controversially called it the SR-71, which obviously stuck, instead of the RS-71. Some say that mistake was intentional, reflecting a shift from Reconnaissance/Strike to Strategic Reconnaissance, while others contend it was purely a mistake. Regardless, it forced designers to change the name on 33,000 different drawings…by hand.

This is that plane, on that day, taking off on that flight. Stop for a moment and think about the significance of this photograph.

17. The Blackbird’s missile avoidance technique was a middle finger to would-be attackers

During it’s decades of service, enemies with itchy trigger fingers fired in excess of 1,000 missiles in the hope of taking down the high flyer. The evasive maneuver used by most pilots? Hit the throttle and laugh, since missiles couldn’t go as fast. Not a single one was ever shot down.

18. It could photograph an entire swath of North Korea in seven minutes

Quite literally, you could start listening to Stairway to Heaven while an SR-71 pilot was 80,000 feet over China, and by the time you were onto the next song, he’d already be over the Sea of Japan.

Once an object in the atmosphere approaches Ludicrous Speed, friction from the flow of air causes a lot of heat buildup. As it happens, black paint helps dissipate that heat better than other colors -- 86 degrees better on the Blackbird -- so over 60 pounds of paint were applied to keep those temperatures from causing catastrophic failures.

20. The cockpit windows are two inches of quartz

Due to their location, they routinely hit 600 degrees (F), and regular glass would warp at those temperatures, thus distorting the pilots’ vision.

21. The flight suit was essentially built for space

Engineers adapted it from the Gemini missions, and it would later be adapted further into the space suits you know today. It had its own oxygen pressurization to prevent suffocation, and because if the crew had to eject at 2,000 mph, 450 degree temperatures would quickly ensue, the cabin was air conditioned to just above freezing.

22. The fuel tanks held fuel about as well as a colander holds water

Thanks to the supremely high operating temperatures, and due to the way materials expand with heat, the body panels were engineered to fit very loosely when cold. On the ground, they leaked so badly that crews would fill the plane immediately before takeoff, and while the plane warmed up, it had to meet with a refueling rig after only seven minutes in the air.

23. SR-71s spent a lot of time behind refueling planes

Those engines burned upwards of 44,000 pounds of fuel each hour, making refueling every 90 minutes a necessity. Making that number even more impressive is that, due to what’s known as the ramjet effect (air and fuel compressing at supersonic speeds), Blackbirds became more fuel efficient at speeds above Mach 2.0, and typically covered about 2,500 miles in that 90 minutes.

24. The Air Force ordered an entire fleet of refueling rigs just to support the SR-71s

25. The fuel required is every bit as bonkers as the rest of the SR-71 story

Late in the 1950s, the CIA, the Air Force, and Shell collaborated on a fuel called JP7, which was structured specifically to work well at ultra high altitudes and at supersonic speeds. To this day, it’s still only used for the most advanced planes on Earth.

One of the ingredients in JP7 just so happened to be a crucial part of Flit mosquito repellant. Bearing in mind the huge amount of fuel we’re talking about here, Shell didn’t exactly have enough supply to meet the newly increased demand, so mosquitos everywhere caught a lucky break.

27. Just for the hell of it, it set a new transcontinental speed record

On the SR-71’s first final flight (more on that in a second) in 1990, it flew from sea to shining sea in 67 minutes and 54 seconds, nearly halving the previous record. During a flight that embodies the very best of the "because fuck you, that’s why” mentality, it went from St. Louis to Cincinnati in eight minutes flat.

28. Five years into retirement, it un-retired

In a move that presaged Brett Favre by more than a decade, the Blackbird came out of retirement for a series of NASA projects, retiring again, for good this time, by 1999. 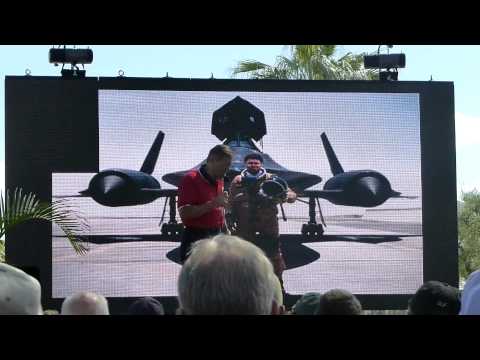 29. It was the ultimate alpha in a sky full of alphas

Watch this video for what is undoubtedly the single greatest 2,000 mph smack down story ever declassified. The super-super-short moral of the story: if you’re in a state-of-the-art fighter jet, bragging to anyone within radio range about how fast you’re going, you’d better make damn sure there’s not someone else cruising along at roughly triple your speed that can’t wait to shut you up.

Aaron Miller is the Cars editor for Thrillist, and can be found on Twitter. He grew up with photos of the SR-71, and only wishes he could have experienced it in person before they were grounded forever.