The Bloodhound SSC team isn't content to just create the world's fastest car—they've designed it to be the first car capable of hitting 1,000 mph. And even if they fail, it should shatter the land speed record (763.035 mph set in 1997) when tested out some time next year.

The SSC has a powerful internal combustion engine that'd be at home in most race cars and it's sole purpose is to pump fuel into the Rolls-Royce jet needed for attaining quadruple-digit speeds. Staying both in control and safe will be no easy task, as is illustrated by the just-completed cockpit you can see in great detail here.

There's not a single thing in the cockpit that's not a) bespoke, or b) NASA-level technology. To create the steering wheel, they made a mold of the exact grip of pilot Andy Green's hands, then scanned it in, and 3D-printed the wheel out of titanium.

Andy had to sit in a pool of resin for 20 minutes while it hardened in the form of his body to build the seat.

Notice how the supports to keep his head in place go slightly past the side of his head? If you have to look to your side at 1000 mph, even for a split second, you're already dead.

For reference, a 747 jet (a typical cross-country flight) needs to be going about 120 mph to become airborne.

In a normal car, the speedometer can be off by as much as ten percent at 30 mph. Rolex had to build a special speedometer just for the Bloodhound SSC that will register up to 1,100 mph with supreme precision.

If any birds happen to get in the way there's almost no chance they'll move in time, so the ballistic canopy is even more tough than that of a jet fighter. In theory, it's capable of deflecting a two pound bird at 900 mph, which, in and of itself, would probably be a Guiness record for World's Fastest Roadkill. 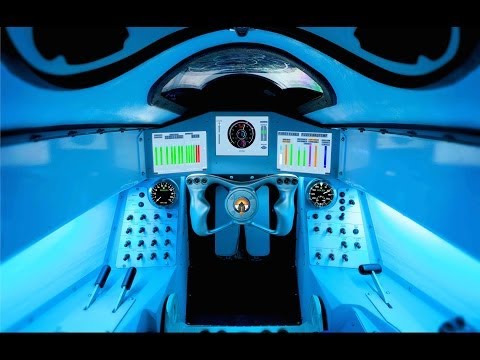 Check out the man at the center the project explaining what all of the switches, dials, screens, and levers do in this video, and you'll really get a feel for how intense the SSC is going to be.

Aaron Miller is the Rides editor for Supercompressor. He's perfectly content to dawdle along at triple digit speeds.