12 Things You Didn't Know About The Porsche 959

To say the Porsche 959 is a legend is an understatement. Whereas its archrival, the Ferrari F40, represents a no-holds-barred approach to speed, the 959 blazed a trail of technology that continues to influence the automotive world to this day. Refined and technically proficient supercars like the Bugatti Veyron and Porsche 918 Spyder can trace their roots to the 959's philosophy, as it truly is a sensational vehicle.

1. The 959 was originally designed as a rally car, not a sports car

Engineers wanted to test new technologies like an electronically adjustable four-wheel drive system, and the ultra-fast Group B rally class that epitomizes 1980s rallying was in full swing, so it was a perfect fit.

2. It won the famous Paris-Dakar Rally across North Africa

Blasting past pyramids and up sand dunes looked easy compared to its Mercedes G-Wagen and Land Cruiser competition.

3. With a top speed of 197 mph, it was officially the fastest car in the world...briefly

When it debuted, it edged out the Ferrari 288 GTO’s 188 mph to be the first car to 190, as this gorgeous shot from Evo illustrates. The reign lasted just one year until the 959’s arch rival, the Ferrari F40, managed to hit 202 mph.

The 959 was indisputably a turning point in Porsche history, and represented a shift toward cutting edge technology and all-wheel drive in the pursuit of performance.

5. A road race-prepped version, called the 961, won its class at the 24 Hours of LeMans

As a result, the 959 is considered the only car to win both LeMans and Dakar.

6. There’s a special gear in the transmission purely for off-road use

“G” stands for gelande (loosely, that's off-road in German) and was meant to help you trudge through thick mud and the like.

7. It was the first production car with tire pressure monitors

Also, some of the earliest run flat tires were developed for the car.

8. It had active suspension that adapted to the road...in the 1980s

Formula One was still in the process of trying to get active suspension right while the 959 had it on the street. 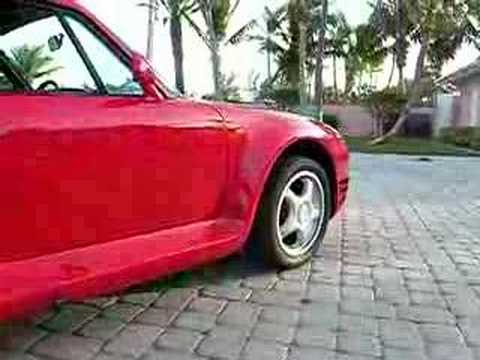 9. If you were bored of driving on a highway in the world’s fastest car, you could tackle not-so-paved areas without getting out of the car

A touch of a button added over two inches to the ride height, which you can see in this video of the car raising itself up. To put that in perspective, that’s how much extra ride height a company like Toyota adds to its super-serious TRD Pro off-road trucks.

10. The engine was one of the very first to utilize a complex “sequential” twin-turbo system

Without delving too deep into technical jargon, turbos are driven by exhaust, and all of the 959’s exhaust went to one turbo at low RPM, then computers rerouted it to both at high RPM. The result was a smooth power band—which is both ideal for motorsports and the polar opposite of the 911 Turbo of the day, infamously known as "The Widow Maker."

11. The 959 was so beloved by powerful people that congress changed the federal importation laws

Bill Gates bought one, and it wound up in a storage area at U.S. customs for over a decade. The government’s stance was that the car wasn’t legal to import, and couldn’t be made so—someone would’ve needed to donate a car for crash testing—so Gates helped get the law changed to allow cars of unusually high significance into the country.

With the M1, a specialist company by the name of Baur was brought in after a contractual issue between BMW and Lamborghini, but with the 959, Baur was selected as the builder from the get-go.

Aaron Miller is the Rides editor for Supercompressor, and can be found on Twitter. He drove both the 959 and F40 literally every single day...as a kid, playing Test Drive II: The Duel.