Why The Pontiac Aztec Was The Biggest Failure In Automotive History

For six decades, the Edsel stood as the archetype of automotive failure. The car nearly sunk the Ford Motor Company for a variety of reasons; most infamously, its toilet seat grille that bore a rather unfortunate resemblance to a vulva. But now, the reins have been handed over to an even bigger failure: the Pontiac Aztek.

It's been ten years since its far-too-late demise in 2005, and we can safely say that Pontiac created the biggest failure in automotive history. This begs one very obvious question: just what the hell happened?

From the outset, Pontiac was intent on producing a radical vehicle that would revitalize the brand, wow the world, and re-establish Pontiac as the avant-garde American automaker it had been at various points throughout the 1960s, '70s, and '80s. The Aztec’s designers were well versed in what the market wanted, but tragically misconstrued the findings.

"The Aztec had some of the best and brightest GM designers working on it."

Preliminary market research yielded buzzwords like “bold,” which after being translated via Pontiac’s management, ultimately became a green light for designers to have at the Aztek with little oversight or direction. Two-tone, yellow with grey plastic moulding, and turn signals completely separated from the headlights? How daring! How bold!

And mind you, this was no sophomoric effort. The Aztec had some of the best and brightest GM designers working on it, including a man who would later be responsible for the current Corvette. The problem was that each designer had a say and the resulting cacophony never quite found its harmony. Consequently, the Aztek became the poster-child of design by committee, lacking focus and any semblance of a unified vision.

Part of the idea behind Aztek was to bridge the gap between the edgy car that younger buyers wanted and the practical minivan that slightly older buyers needed. Instead, it became an ugly duckling minivan for 20-somethings that absolutely nobody wanted until Walter White somehow managed to make one look cool building a meth empire in boring New Mexico.

And although minivans are rarely considered cool, bear in mind that this was a time when crossovers were on the precipice of a boom that radically altered the American vehicular landscape. That the Aztek was positioned on the front lines of the explosion and couldn’t profit is easily its biggest failing point.

A true crossover, it was built on the all-but-forgotten Pontiac Montana minivan and, from an engineering standpoint, the Aztek was actually advanced for its day. Optional all-wheel-drive meant it could get you to a much better campsite, and it had tighter steering and less body roll than true SUVs because its crossover construction meant it shared more with a car than with a truck.

When it finally went to market, the Aztek sold like vitamin supplements at a Big Pharma convention. It fell so drastically short of sales goals that GM didn’t even come close to breaking even. That such a poorly-selling vehicle lasted for five years is kind of amazing, but it speaks to a different side of the Aztek and its tragic “what if” story.

"From an engineering standpoint, the Aztek was actually advanced for its day."

In the darkest corners of the automotive world, water cooler talk amongst people close to the Aztek project produced utterings of how good of a concept the Aztek really was. Crazy, right? Not really, actually. From a bureaucrat's standpoint, it was on time, on budget, and did everything it was supposed to, all while breaking new ground that no other carmaker was ballsy enough to do at the time. 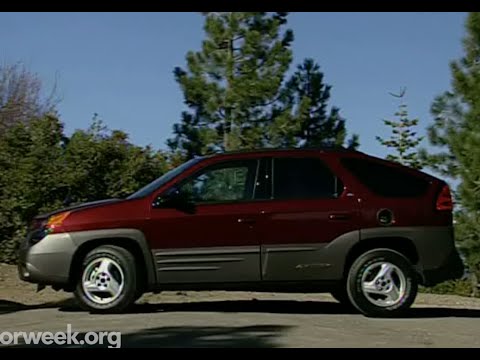 Pontiac was proud. After all, such a bold vehicle fit perfectly with the Aztek’s design brief. Any market research that indicated the Aztek was an abomination to behold—and there was some—was dismissed as ignorance from a general public that wasn’t ready for such boldness. And maybe Pontiac was right. Realistically, the Aztek really wasn’t all that bad. By most accounts (from those who drove it), the ill-fated crossover was quite praiseworthy for its driving dynamics (Exhibit A: the glowing review above, from MotorWeek). Unfortunately, one cannot become a grand failure without first showing obvious signs of success.

And so it goes, as the years progress and the Aztek is relegated to history books, that Pontiac’s biggest blunder will always be singled out as the final nail in the coffin for the entire brand. GM may have suffered through horrendous bureaucratic decision-making and numerous other commercial failures along the way, but no one will ever remember those or attribute them to its inevitable demise. The Aztek, however, will always remain a visible scar, a cautionary tale of what not to do, the one loophole to Winston Churchill’s famous quote, “Success is not final, failure is not fatal.”

Aaron Miller is the Rides editor for Supercompressor, and can be found on Twitter. He's impressed at the level of insulation the Aztek's designers had from the needs and wants of the outside world.