By Aaron Miller, and Keller Powell

Embarking on the quintessential American road trip in a British car is beautiful irony...and exactly what filmmakers Alex Schepsman and Matt Mitchell did when they decided to drive Alex's dusty blue 1994 Land Rover Defender across the Southwest: four states, two weeks, and 3,000 miles.

The British version of our Jeep, Land Rover's most rugged 4x4 has been the go-to vehicle for road trips ever since students from Oxford and Cambridge used them to traverse the African Sahara. Sadly, these rugged machines have been out of reach to American hands since 1997, though they're looking to finally make a stateside comeback in the next few years, when a new generation of Britain's most iconic off-roader is expected to drop.

"It’s an epic beast of a truck that they haven’t shipped to the states in 20 years, so we decided to make a tribute film to the Defender and America." Along with their buddies Drew and Justin, Alex and Matt showed their appreciation to the Defender with a stunning homage... 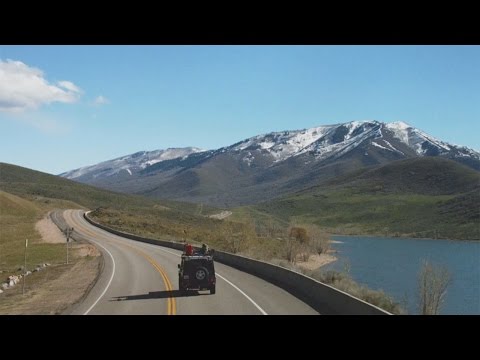 Check out this behind-the-scenes footage from the adventure. Just make sure you watch the final product below.

Beginning in LA, the crew loaded a 30-foot RV full of film gear and set off with both vehicles—driving distances of up to 600 miles in a single day.

Of course, the last time the Defender was sold here, you could get gas for under a buck a gallon, so that same 600 miles didn't cost almost a monthly car payment in fuel.

"We used this great app called Roadtrippers to plan our trip which allowed us to make sure we had some places and terrain that was not only beautiful, but would put the truck through it’s paces," Matt said. [Ed's note: all subsequent quotes are from Matt.]

This was no "group of guys and a GoPro" operation. The filming equipment's about as serious as the Defender.

And that RV helped out with some pretty killer shooting angles.

"We tried to hit as many terrains and environments as possible: the ocean, mountains, desert, red rocks, forests, snow, sand, and of course, asphalt."

"The states we hit were California, Nevada, Utah, and Arizona. Each place brought something unique to the journey..."

"...whether it was one stunningly beautiful vista after another, warm people and welcoming cities, interesting and delicious food, or absolutely insane weather."

And horses! A lot of horses.

The guys had their share of close calls, and not just the usual mechanical difficulties. We're talking food poisoning and a trip to a hospital near an Indian reservation.

They camped out with an open fire whenever possible...but snowstorms in Arizona weren't the only instance of bizarre weather.

"Multiple snowed in passes forced us to turn around after committing hours to a single road..."

"...and a full blown white-out of salt at the Bonneville Salt Flats, which left us driving blind and added 50-60 mph wind gusts into the side of the RV."

"The trip proved to be the perfect combination of everything we were searching for; the infectious need to get out on the road and travel across the American West, while finding beauty and inspiration in nature and the unfamiliar places we all call home."

"The final Land Rover film was a complete passion piece, and one we are very proud of. It highlights all of the exceptional places that only a car like the Defender can take you to." 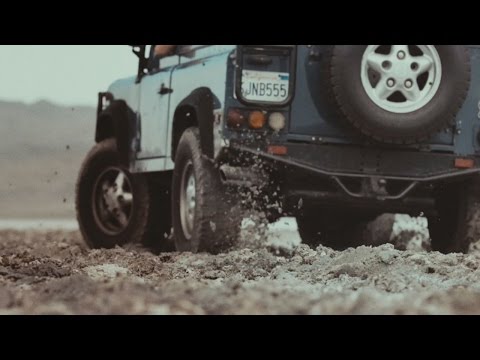 If you weren't excited about the Defender coming back stateside, you should be now.

Aaron Miller is the Rides editor for Supercompressor, and can be found on Twitter. A road trip across Bonneville is on his bucket list.

Keller Powell is the associate editor at Supercompressor and the furthest she's ever driven is 1,123 miles. Follow her on Instagram.