16 Facts Every Jeep Lover Should Know

We can all agree that Jeeps are some of the coolest looking vehicles anywhere on Earth, and certainly some of the most fun. Jeep more or less invented the modern SUV in the early '60s, but did you know that no one really knows where the term "jeep" comes from? Or that one time a squad of Jeeps went on a 21,000-mile road trip through some of the world's harshest terrain? Those are just a few of the 16 things you didn't know about Jeep.

1. The original jeep was designed in just two days

With the United States' involvement in WWII on the horizon, the government recognized a desperate need to replace its aging fleet of Model T's, calling for a small, lightweight, three seat, four wheel drive vehicle. Karl Probst started work on his design for a barely-solvent truck company called Bantam on July 17, 1940, and finished two days later. By the 22nd, the entire proposal—including cost estimates—was handed in to Uncle Sam.

2. Ford, Willys, and Bantam then further developed the concept

Bantam didn’t have the capabilities to produce the sheer quantity needed to fight the Nazis, so the Army brought Willys and Ford to the table and handed them the blueprints. Ford had a number of innovations on its "Pygmy" design, while the Willys Quad, shown, even featured four-wheel steering.

With the war looming, emphasis on both quality and ease of production meant Willys had to adopt several components, not the least of which was the Pygmy’s flat front grill, shown here.

You can officially count the Society of Mechanical Engineers as fans.

5. No one really knows how the name Jeep came to be

While it’s commonly thought that “jeep” is a truncation of General Purpose vehicle, or GP, that’s likely wrong. Ford’s version was officially named GPW, where G means Government, P refers to the distance between the wheels (80 inches), and W stands for Willys, since the vehicles Ford produced were technically under license from Willys.

Alternately, some say it was common lingo to refer to all military prototypes as “jeeps,” and that “peeps” even entered the lexicon briefly. All we know is...maybe?

6. The most interesting theory is that Jeep is named after a cartoon character

This little guy’s name is Eugene the Jeep. He’s a character in “Popeye” that was first drawn up a few years prior to the Bantam 4x4.

7. In the 4x4's first public outing, it was driven up the steps of the U.S. Capitol

When asked what it was, the driver replied simply, “It’s a jeep.” Two years later, Willys-Overland filed a trademark application.

For the first time, Willys were available to civilians after the war.

9. The Willys Station Wagon was the forerunner to the modern SUV

Willys intended to sell its vehicles mostly as utilitarian farm vehicles. As it turns out, farm vehicles can be pretty fun, and almost as soon as the war ended, the Willys Station Wagon hit the streets...and trails.

10. The Station Wagon's replacement, the Wagoneer, was the first SUV

When it came time to replace the Station Wagon, the Wagoneer had modern conveniences like an automatic transmission and power steering, kicking off the long route to the luxurious rides dotting the landscape today.

11. Pretty much everyone copied the original Jeep

Land Rover at least had a few innovations on the Series I, but Toyota even used “Jeep” in its advertising (shown), until a less-than-friendly call from attorneys convinced it to change to Land Cruiser. Plenty of other companies around the world have made copies under license, including Mitsubishi and Ford.

12. Jeep’s owners have been all over the map—literally and figuratively

In 1953, Willys-Overland was bought by Kaiser Motors (think Kaiser Permanente—same guy), which was eventually sold to American Motors Company. AMC was then bought by first Renault then Chrysler. Since then Chrysler has been owned (or merged with) by Daimler, a private firm whose investments are overseen by Dan Quayle, the U.S. and Canadian governments, and now Fiat.

A man named Mark A. Smith organized the first Jeep trek across the Rubicon Trail near Lake Tahoe in 1953. They’ve never stopped since, and today Jeep Jamborees are large enough to warrant Jeep bringing unique concept vehicles to thank the loyal fans. 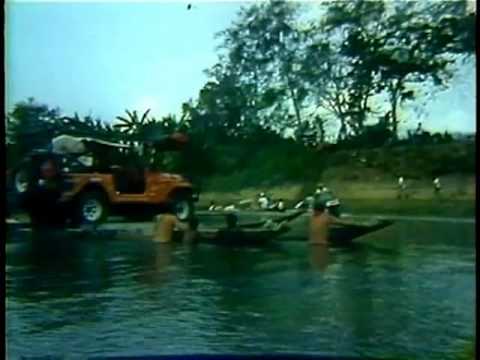 14. The Expediciones De Las Americas is the most badass road trip you've never heard of

A couple of decades after starting the Jamboree, Mark A. Smith led an expedition of Jeeps on the longest off-road trip in history, trekking 21,000 miles over some of the world’s most inhospitable terrain from the southernmost tip of Chile to the northern reaches of Alaska. Just...watch this video and you'll understand.

15. In 1959, Jeep introduced a special version just for resorts

Depending on the market, it was called the Surrey or the Gala, and it featured a fringe-lined canvas top, not unlike a Fiat Jolly.

16. The USPS mail Jeeps led to the Hummer...kinda

In addition to supplying the military with vast quantities of vehicles, Jeep produced the USPS mail trucks for 30 years. To keep up with production, it established a separate facility for government orders. After the AMC takeover, that facility was made into a separate company, AM General, which went on to produce the Hummer.

Aaron Miller is the Rides editor for Supercompressor, and can be found on Twitter. He's been in multiple bodies of water in Jeeps, though somehow, never as a driver.