Movies toss characters into all sorts of unrealistic situations—climbing tall buildings, tumbling through the air, hanging out with The Rock. That's because filmmakers have the green-screen tech, computer-generated graphics, and ridiculous budgets to make it all seem believable. Sometimes, a good action movie is nothing more than a magic show.

Except, in some cases, all the tricks are real, because Hollywood is full of people just crazy enough to wonder what would happen if they actually gave fate the finger. These stunts should've been built in some studio basement by a bearded visual effects specialist. Instead, they went down in the real world. 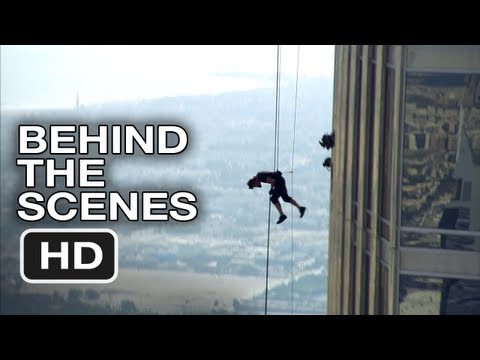 In case you needed another reason to believe that Tom Cruise is the victim of an undiagnosed mental illness, check this out. For a key scene in the fourth installment of the Mission: Impossible franchise, his character had to climb the outer wall of Burj Khalifa, which, at 2,722 feet, is the tallest building in the world.

Rather than do the sane thing, which would be to build a set of the section they needed shots for and CGI the rest, the filmmakers instead strapped Cruise to ropes, lowered him down, and had him not only climb the building, but run along the face of it. Computers were only used to delete the ropes in post-production. Somehow that Oprah! appearance seems less psychotic now.

The opening chase of Casino Royale convinced a lot of delusional dudes that they could handle parkour. That crane-to-crane jump, though? That was obviously augmented with the help of special effects wizards, right?

Not quite. It was a practical stunt. Daniel Craig himself opted out of it, letting his professional stunt double handle it. For a pampered star like Craig, the experience would have likely left him shaken and stirred (boom).

Director Christopher Nolan cares about authenticity. Case in point: for the opening sequence of The Dark Knight Rises, rather than use green-screen to convince viewers that what they were seeing was real, he enlisted stuntmen to suspend in the air, crawling along a lightweight mockup of an airplane. Edited together with interior shots of an actual plane, it looked a lot like Bane's henchmen really were performing a mid-air rescue. We can only imagine that half the film's budget was spent on insurance. It's nice to have realism in a movie about a billionaire dressing up like an animal and punching clowns.

In order to deliver the batshit insanity that was Mad Max: Fury Road, director George "Happy Feet" Miller made sure that all of the stunts were as real as possible. Tom Hardy leaping onto a crane hook? Real. Those creepy swinging pole men? Real. Those mind-shattering car crashes? Real. After spending years away from the post-apocalyptic franchise that launched his career in order to helm family-friendly fare like Babe, Miller presumably had to make up for lost time by taking a bunch of cars out to the desert and blowing them all up. Must have been therapeutic.

And we all owe more respect now that we know the scene actually relied on practical effects, rather than CGI. Nolan's team built a revolving hallway and choreographed the fight around it. Hopefully the actors had puke buckets on set.

Cliffhanger - A stuntman zip-lined from one plane to another

Back when Stallone could still non-ironically star in an action film, Cliffhanger got our blood pumping early on with a mid-air heist that culminated in a character transferring from one plane to another via zip line. Even without the effects of today, this could have easily been pulled off with composite techniques.

Instead, they paid a stuntman $1,000,000 to do it for real. At 15,000 feet up in the air, Simon Crane, whose balls must one day be studied by science, delivered the goods, and hopefully never paid for another drink again in his life.

Skyfall - Yes, they were fighting on top of a real train

Director Sam Mendes instantly assured viewers that Skyfall would have nothing in common with the plastic bag bullshit of American Beauty by opening the movie with a fist fight atop a moving train. Any number of effects could have been put to use to make this look realistic, but the crew decided to take the YOLO approach to filmmaking by actually staging the fight on top of a real train. And anytime you actually see Bond's face? That wasn't any camera angle trickery. Daniel Craig's really up there, probably maintaining his cool by repeating his paycheck like a mantra throughout the whole thing.

Though the Die Hard films will never be acclaimed for their realism, the fourth movie abandoned all semblance of seriousness with stunts that everybody thought could only come out of a computer. That car crashing mid-air into the helicopter might as well be from the latest Grand Theft Auto game.

But it was real. Some computers were used to enhance the images, but the shot itself involved an actual car flying into an actual helicopter. That fact, coupled with the film's title, may make this the most American moment in all of human history.

At this point, we'd urge Tom Cruise to get help, but we don't want to miss out on prime entertainment opportunities. For the next Mission: Impossible film, he topped himself by hanging on to an airplane—a small safety harness was removed digitally—while it took off into the air. Much like starring in Vanilla Sky, you might think this is the kind of mistake Cruise would only make once.

But he did it eight times.

Maybe Tom Cruise is just the adult version of the kid who jumps off the rollercoaster and shouts, "Ride it again! Ride it again!"