The Diets Of 11 Legendary Ass-Kickers

When you look at guys like Bruce Lee and Arnold Schwarzenegger, you’ve got to assume they follow the strict Rocky diet of raw eggs and pure vengeance. However, some of these muscle men are just like us—they eat carbs, avoid red meat, lift weights, and drink the tears of their enemies.

If you’re looking to go from zero to hero, check out the diets of some of the most badass dudes in history and maybe someday you’ll be lucky enough to punch out Sylvester Stallone.

This guy was not only one of the best fighters of all time, but he was actually a big meat eater—particularly favoring beef and liver. Sticking to his Chinese roots, Bruce avoided a lot of western food, citing it contained too many empty calories.

The legendary fighter would avoid refined flour and only stick to rice-derived carbohydrates along with consuming protein and whey powder, while avoiding dairy. So, just remember, when you eat dairy, you’re eating the enemy of Bruce Lee.

A recent interview with the actually-kinda-outrageous JCVD gave the world a window into his diet: “I eat people...that was a joke by the way. I like to eat a lot of rice, bread, vegetables, and beans. I’m more into vegetables though. I like to eat anything that doesn’t have eyes—anything that has eyes has cholesterol."

"Anything that has eyes has cholesterol." —Jean-Claude Van Damme

Unbelievably, he continues: "Anything that has a soul is not good for the body. Anything with a life substance in it, like a cow or fish, can be dangerous for the body. I only eat meat on certain occasions and, if I do, it can’t have any fat on it.”

To prepare for the role of Wolverine, this dude ate up to 4,000 calories a day. The combination of lifting and protein worked out so well that there’s now a diet named after it: The Wolverine Diet. It involves a massive breakfast, followed by five less massive meals.

Schwarzenegger is the standard when it comes to gubernatorial bodybuilding action stars. His dietary advice reflects his personality: strict, intense, and regimented.

These are Arnold's rules for daily eating and working out: Five to six "small" meals per day, eat carbs a half hour before exercising, 30-50 grams of protein with each meal every three hours, don’t avoid saturated fats, no more than three eggs a day, replace beef and pork with chicken and fish, avoid fish.

Arnold would eat an entire chicken and drink a pitcher of beer after a workout.

Clincher: During his earlier days, Arnold would eat an entire chicken and drink a pitcher of beer after a workout. Turns out a post-workout beer isn’t even that bad for you!

If you’re wondering how this 75-year-old martial arts legend stays looking like he just swallowed the soul of a man half his age, his diet might provide some insight. His extremely health-oriented food choices may not be as strict as Gwyneth Paltrow’s but they're still pretty boring.

This man was a legend when it came to food. “He’d go into a restaurant and eat 12 steaks and 15 lobsters,” reported his close friend, Tim White. He could also drink you, your friend, and everyone you know under the table.

Andre himself admitted to drinking 119 beers in a single session, and during surgery, he reportedly told an anesthesiologist it took him "two liters of vodka before [he] feels warm." You probably shouldn't follow any part of this dude's diet, due to the threat of, uh, death.

Stallone maintains a high protein diet. “If it floats, flies, crawls or runs, I eat it. High protein. That’s all,” Sly told Examiner. This also means days packed full of easily digestible foods like eggs, figs, and pumpernickel bread. Stallone also goes the route of skinless chicken, broiled squash, and only lean meat. He hasn’t had a pastrami sandwich for fifteen years. If you’re wondering about eggs, yes, he told Daily Star that he indeed eats them: "I eat three egg whites and a half yolk for breakfast, along with Irish oatmeal, toast and fresh papaya.” No word on whether or not they’re raw.

Jackie Chan is a beacon of hope for those who think you have to cut out every tasty food in order to gain some muscle. An interview with Chan revealed that the famed martial arts master still eats ice cream: “I really don’t have a special diet—I eat everything. Of course, I’m watching not to eat things that are too oily. Mostly I eat vegetables and once or twice a week I’ll eat ice cream, but mostly I just stop myself from eating too much junk food.”

Dwayne Johnson splits his days up by seven massive meals with an absolutely ridiculous amount of fish. Like, seriously, this man will single-handedly make cod extinct. 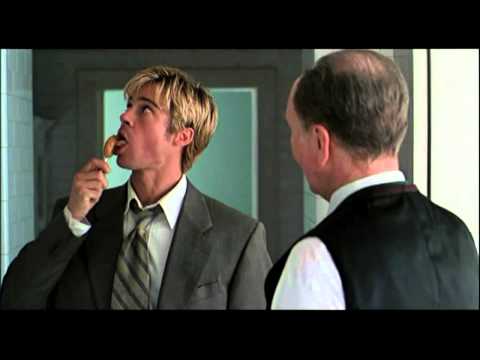 While he's not particularly the strongest guy out there, Brad Pitt can be seen eating food in basically every single movie he's appeared in. He got jacked for roles like Achilles in Troy by adhering to a diet of lean protein and non-starchy fruits and vegetables while avoiding things like bananas, mangoes, squash, potatoes, corn, and peas. Not sure what's wrong with peas but okay. If you're into the whole Fight Clubphysique, he got that by diet too.

From the man who got shot midway through a speech and still continued to deliver it, it's not a huge surprise that his diet was anything but dainty. An excerpt from The Presidents' Cookbook gives us some insight into his ridiculous eating habits:

“For breakfast, the President had hard-boiled eggs with rolls and coffee. He varied this occasionally by having a big bowl of hominy with salt and butter. Coffee, too, was consumed in volume. Ted, Jr., recalled that his father's coffee cup was ‘more in the nature of a bathtub.’ One observer, O.K. Davis, said, ‘I have seen him eat a whole chicken and drink four large glasses [of milk] at one meal, and chicken and milk were by no means the only things served.’”

That's a meal fit for a king.

Jeremy Glass is a staff writer at Supercompressor and eats cereal for breakfast, lunch, and dinner.

Want more of the Culture you actually care about delivered straight to your inbox? Click here to sign up for our daily email.;