We Talked to the Mountain About His New Vodka

Hafþór “Thor” Júlíus Björnsson has a long resume of impressive feats. He gave us eternal nightmares with his skull-crushing portrayal of The Mountain on Game of Thrones; he just broke the World Record for throwing a 27-pound beer keg over 26 feet in the air; and he has, presumably, opened countless stubborn pickle jars for his friends. Now, Björnsson can add liquor brand co-owner to the list, having just launched a vodka with his new company, which is, of course, called Icelandic Mountain Spirits.

The 40% ABV Icelandic Mountain Vodka (a tongue-in-cheek reference to his character, Ser Gregor Clegane, on Game of Thrones) is distilled seven times from pure Icelandic water. It also brings attention to a region that has seen rising numbers of micro-distilleries in recent years. “I think it’s very important that my brand is Icelandic and mixed with the Icelandic water—it is known for its purity,” Björnsson says. “I am proud of being an Icelander and we have been getting a lot of strong and positive responses from all over Iceland and abroad.”

“It was not something I had given a lot of thought, but my friend is a graphic designer and had been working on developing artwork for a local spirit company,” Björnsson says. “He called me up one day and presented the idea of the Icelandic Mountain Vodka and showed me a rough sketch of the bottle. I immediately saw that we had something here.”

The design is indeed striking. The front of the bottle features an Icelandic flag styled like a Medieval sigil with craggy mountains rising above it. And the back of the bottle sports a silhouetted sketch of Björnsson—lest someone think the vodka was referring to a different The Mountain. “What did George Foreman say? I’m so proud of it, I put my image on it,” Björnsson says, laughing. “Or close to that.”

The spirits company plans to pay tribute to the guardians of Iceland known as landvættir. “First we have the mountain (Bergrisi), then the dragon (Dreki), then the eagle (Gammur) and finally the bull (Griðungur),” Björnsson says. With the Mountain Vodka taken care of, the company is now focused on releasing an Eagle Gin, Bull Rum and Dragon “Shots.”

HBO recently announced that season seven of Game of Thrones was delaying shooting. Winter has finally come to Westeros, which means filming is on hold until winter also comes to Ireland. When production picks up, Björnsson plans on sharing his vodka with his fellow cast members. He adds the drink “stands strong on its own, served straight up, over Icelandic ice.”

But just how much Icelandic Mountain Vodka would they need to drink in order to stand up to The Mountain’s recently revealed, decaying zombie face?

“There is not enough water in all of Iceland to make enough vodka to make that happen.” 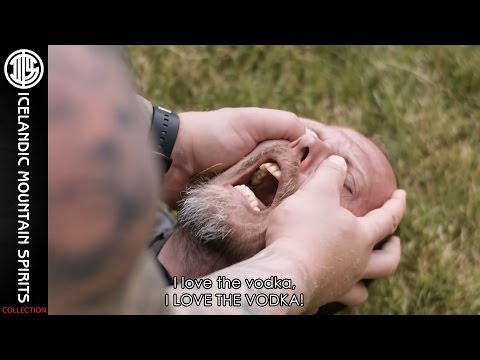