14 Things You Didn't Know About Malort

What can you say about Malort that hasn't already been said... about drinking pesticide? Whether you love it, hate it, or pretend to hate it but secretly love it, you can never know too much about it. Here're 14 facts about Chicago's polarizing cult liqueur.

1. It's not actually flavored with gasoline

The only flavor ingredient in Jeppson's Malort is wormwood, a bitter herb known for its ability to kill stomach worms and other parasites. It's also the main ingredient in Absinthe, a liqueur known for its mythical psychedelic effects. However, Malort's wormwood has an extremely low thujone level -- the chemical compound that supposedly causes mind-bending effects -- so the only 'trip' you'll go on is to bitterface county.

2. Its Chicago flag has three stars on purpose

The city flag on the label only has three stars, and not because the designer was ripping shots of the product (which he probably was), but because it pre-dates the Century of Progress Exposition in 1933, which inspired the flag's fourth star.

3. Malort was one of the few beverages Carl Jeppson could taste

Carl Jeppson was a Swedish immigrant who came to Chicago in the 1930's along with his home-made spirit. As a cigar shop owner and avid smoker, Jeppson loved drinking and selling Malort, because it was one of the only things his tobacco-ravaged tongue could actually identify.

The liquor was sold door-to-door by Jeppson during Prohibition, with the loophole of being medicinal alcohol. Jeppson's Malort was the only legal wormwood product sold in American for 96 years, starting in 1912 and up until 2008, when other wormwood products (like absinthe) became legal.

5. The fan slogans are priceless

Malort is an incredibly small operation (they have two employees, including the owner), and while their budget can't afford print ads, fan-created promotions are right in the brand's wheelhouse. Here's just some of their ad wizardry: 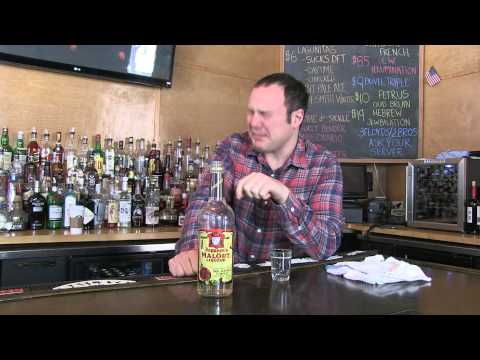 6. The fan commercials are also amazing

Like this one from local sketch comics Dave Caro and Chris Onorato posing as Carl Jeppson's great-grandson and showing how impossible it is to say the phrase "sweetest Swedish Malort".

7. The Daily Show correspondents swear by it

Comedian John Hodgman brings a bottle of Malort to his standup shows, passing it around for the audience to chug (the bottle usually comes back to him three-quarters full). At a recent show at the Vic, he shared it with Eugene Mirman and Kristen Schaal to consume on stage.

90% of all Jeppson's Malort produced is consumed within Cook County. This glorious new MalortMap will show you every bar and store on Earth that sells it.

9. The Swedes are responsible for the recipe

Malort's viking fuel is made in the style of bäsk brännvin -- a Scandinavian term for liquor distilled from potatoes, grain, or wood -- and translates to "bitter distilled spirit" in Swedish.

10. It was used to ease menstrual cramps

At the Marsalle distillery in Chicago during the 1960s, women that worked there would often pull bottles off the production line and drink them when they had menstrual cramps. Guess you don't need a heating pad when you can just light your stomach on fire from the inside.

11. The company hired a guy they nearly sued

Malort had considered litigating against Sam Mechling for creating unauthorized Facebook and Twitter pages for the company without their consent. Instead, ownership decided it made more sense -- and was probably cheaper -- to hire him as Director of Marketing.

12. It shares a name with everyone's favorite nuclear meltdown

While Malort means "wormwood" in Swedish, the Russian translation of the word is "Chernobyl." The infamous nuclear power plant was named after the native wormwood fields that once grew there... you know, before the whole radiation thing.

13. It recently got MORE bitter

The strength of wormwood (Malort's main ingredient) varies wildly, so some plants are more intense than others. Recently, a very strong batch of wormwood was found (at an undisclosed location), and thanks to that, the latest bottles to hit the market are tasting stronger than ever. Prepare for a severe case of Malort face.

14. The original label ended with what sounds like a gypsy curse

The original back label describing Jeppson's brand was capped off with: "The first shot is hard to swallow! PERSEVERE. Make it past two 'shock-glasses' and with the third you could be ours... forever."

Sean Cooley is Thrillist's Chicago Editor, and he lives his life by Anthony Kiedis lyrics. Follow him @SeanCooley.