Everything You Need to Know About This Year's Winter Beer Dabbler

It’s that time of year again when a bunch of crazy Minnesotan’s get together for our favorite outdoor beer-drinking extravaganza: the Winter Beer Dabbler. The February 4 event at the Minnesota State Fairgrounds is projected to sell out again this year, so if you don’t have your tickets yet we highly suggest you get on that so you can join the nearly 8,500 other beer crazed locals and 150 local and regional breweries pouring over 400 different kinds of beer.

We caught up with Dabbler ringleader Joe Alton to talk about what you can look forward to and what’s new on the docket for this year’s festival ranging from food updates to brand-new brews. We’ve got everything you need to know to get yourself prepped for the largest outdoor beer festival in the great state of Minnesota.

As always, weather will likely play a pretty major factor when it comes to determining how you’ll go about your beer filled celebration. Currently the forecast is predicted to be fairly mild with a projected high of 25 degrees and low of 17. When it comes to early February in Minnesota, those are some excellent temperatures, but you’ll want to keep an eye on that as the event comes closer because there’s nothing that can end a good time faster than a little frostbite on your feet. Remember, like Alton says, it’s all about, “Function over fashion,” so keeping a pair of wool socks on hand is never out of the question.

There’s some GREAT news on the food front this year for the Dabbler. The fairgrounds have loosened up their rules, so instead of a few select concessions, they’ll also have a variety of food trucks on site, which will include the likes of Gastrotruck, Potter's Pasties, Habanero Tacos, Market Bar-B-Que, and The Smoking Cow all of which serve up food perfect for the winter weather. Lunds & Byerlys will also have their Meat & Cheese Showcase where they’ll be offering up unlimited samples of various meats and cheeses. 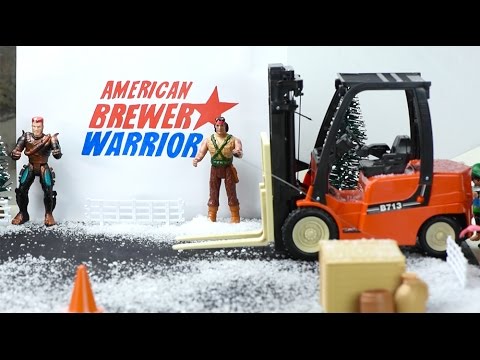 The battle of the brews

Just as they’ve done every year, they’ll continue on the tradition of determining the best in Minnesota homebrew. Everyone that buys a ticket is eligible to enter one homebrewed beer in the competition and all you have to do is register on the website in advance and then bring two 12oz bottles of your favorite homebrew which will then be judged by Beer Judge Certification Program certified judges.

The Dabbler will also feature a new competitive event for nationally competing breweries. The first annual American Brewer Warrior Competition will feature an obstacle course with a variety of beer-related challenges which include a forklift keg carry, a malt bag carry, a sack race, and keg throwing. It should definitely be quite a site for all in attendance.

It should go without saying that the main draw to the Dabbler is the beer and there’s a host of new local and regional brews making debut appearances this year. On the local side of things, newcomers will include Angry Inch, Bald Man Brewing, Broken Clock Brew Co-op, Cosmos Brewing, Lazy Loon Brewing Co., Oliphant Brewing, Talking Waters Brewing Co., Utepils Brewing, and Wild Minds Artisan Ales, and we’re excited to try each and every one!

As for out-of-towners, Boston’s Harpoon Brewing will be here along with Lexington Brewing and Distilling Company out of Kentucky. Currently holder of Lord Dabbler’s Cup, Rhombus Guys Brewing out of Grand Forks, ND, will also be on hand with their brand-new batch of Freak Show, an English strong ale brewed with North Dakota grown two-row malted barley, roasted barley, crystal malt, and some English hops and it’s been aging in Far North whiskey barrels since August. Count us in!

Other festivities and details

In addition to all of the beer the Dabbler will also play host to several other forms of live entertainment. Live music will be provided by local bands The 4onthefloor and ZULUZULUU and local DJ Shannon Blowtorch, will also be working hard spinning records and entertaining the masses. For the more sophisticated beer drinkers out there, MPR will be providing live classical music inside the heated coliseum.

And of course the Dazzler crew will be out taste testing all of the beers looking for the absolute best in show in order to determine who gets to take home the coveted Beer Dazzler award.

This event is shaping up to be another solid showing, so you better get your tickets now in order to be ready right at 2:30pm on February 4th, for a day of seriously fun outdoor beer drinking.

Sign up here for our daily MSP email and be the first to get all the food/drink/fun the Twin Cities have to offer.

Keane Amdahl is a veteran Twin Cities beer drinker who likes drinking outdoors in the freezing weather just as much as anybody does. Follow him as he tries to desperately keep warm on Twitter @FoodStoned.