Booze & baseball go together like hot dogs & mustard, which actually ALL GO GREAT WITH EACH OTHER, so yeah -- this right here is what we call a mixed metaphor. Nevertheless! I have no intention of watching tonight's All-Star Game (that televised Midsummer night's nightmare of Joe Buck-induced boredom), so to celebrate America's pastime my way, I deep-Googled the now-famous drinking lore surrounding four Major League legends, from Harry Caray's Ripken-esque sipping streak, to Mickey Mantle's entire life.

Got a true-ish story of a once-great MLB party animal? If it's got a happy-ish (or at least, not terribly depressing) ending, share it in the comments!

I'd make a joke about "calling his shot", but that would be stupid, so instead, here are select anecdotes illustrating the biggest name in baseball's passion for the good life:

"One night in Detroit after a few drinks, Mantle & Martin crawled out on the 22nd-story ledge of their hotel."

Though Mick's stories are pretty legendary, we'd feel remiss not to mention that his later life turned into a cautionary tale, a scary reality check on the dangers of alcoholism. But there were some bright spots along the way, and they're worth remembering:

"Boggs may have drank 64 beers on a single roadtrip." 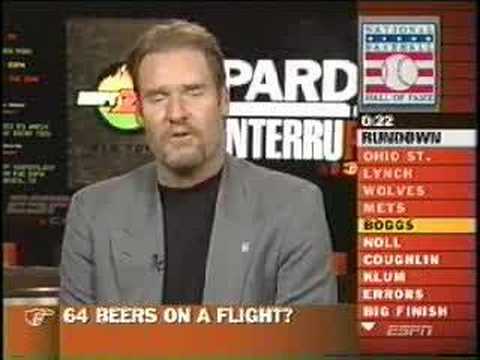 The Chicken Man's drinking legacy begins & ends with a single story about the time he may (or may not) have drunk 64 beers on a cross-country roadtrip. Brought to light by an intrepid, sign-making College Gameday fan, the claim is coyly denied by Boggs himself. But the Hall of Famer's smirk in the Pardon the Interruption interview above suggests that while it may not have been a full 64, it was certainly more than the "few Miller Lites" he later claimed.

Will Ferrell's favorite fair-haired Chicago announcer wasn't technically a ballplayer, but, man, did he drink like it was a competition. Highlights include:

Because this is a family website -- You and I are family, reader. Aren't we? -- I excluded narcotic-fueled baseball fables. But that's not to say they didn't happen. For additional reading, deep-Google:

Enjoy the stories -- I'm a firm believer that they're more enjoyable than the game itself.

Dave Infante is a senior writer for Thrillist food & drink. Want to know how much he cares about baseball? He once traded a ball signed by Joe DiMaggio for a fountain pen. So yeah: not a lot. Follow him on Twitter: @dinfontay.