The Worst 'Bar Rescue' Makeovers Ever

When Jon Taffer -- inventor of NFL Sunday ticket, pioneer of the “butt funnel,” lover of slicked-back hair -- enters your bar, there are a few certainties. You’re going to get yelled at. You’re going to find out you’re terrible at everything. And you’re going to have your bar remodeled to become... usually something really odd and off-brand.

Taffer’s gutted more than 150 bars across five seasons of the popular Spike series, Bar Rescue. The results are often a complete 180 from the bar’s original concept. But sometimes, Taffer and his crew double down on gimmicks and themes in ways that are at once dumbfounding and hilarious. These are the eight most dramatic -- and weirdest -- “Bar Rescue” makeovers so far. 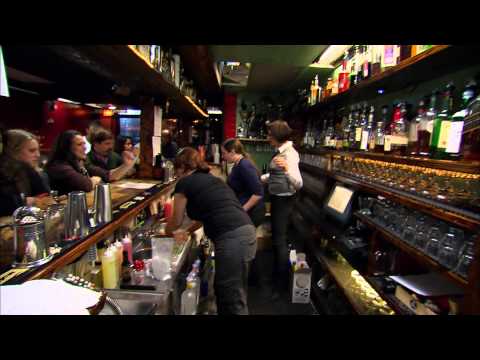 “Yo Ho-Ho and a Bottle of Dumb”

Season 2, Episode 1
In the greatest episode of all time, Taffer hits Piratz Tavern, which is -- yep -- a pirate bar. But with a Z, so you know they’re serious. It’s divey, the workers dress like Jack Sparrow and do jigs, and the entire thing has the feel of a rundown Pirates of the Caribbean knockoff ride. So naturally, Taffer transforms it into “Corporate,” a sterile bro bar to suit the local financial firms, complete with self-serve beer machines and servers who ditch their scarves and three-point hats for ties and hair gel. It... doesn’t go over well. Not even finance bros would want to hang out at a bar called Corporate, let alone pirates. Tears are shed. By pirates using weird fake English accents. The place sucks. After shooting, the piratz revolted, burned an effigy of the host, and re-opened as their shitty pirate bar. It’s now closed forever.

The best bit: One server quits because he’s no longer allowed to talk like a pirate at work. Turns out every day can’t be National Talk like a Pirate Day, but there’s an inherent sadness that pervades this one, and you kinda have to respect the dude’s commitment. 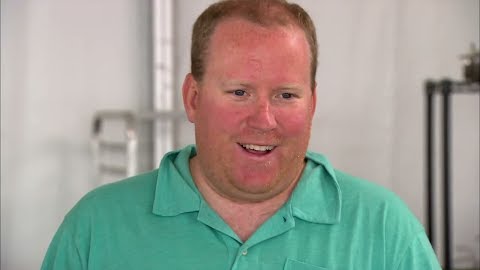 “Grandpa Got Run Over by His Grandkids”

Season 3, Episode 23
What do men in Vegas really crave? Apparently, if you’re hometown hero Jon Taffer, the answer is bacon. Now, the bacon thing has been overblown for a while. But that doesn’t stop Taffer from re-imagining Kerry's -- $4 million, shitty sports bar that looks like a Bob Evans run by a family of squabbling Jersey Shore rejects -- into a palace of pig called Bacon Bar. There are bacon-rimmed cocktails, bacon-loaded food, pint glasses of bacon, bacon-themed art, TVs showing sizzling bacon, and enough pig-based decorations to make Pink Floyd envious. If you thought the bacon trend was overblown, well, you were right. And here is proof. (Also, this place is still in business, so, um, maybe he was right all along.)

The best bit: “I’m disgusted. I want to vomit. And I want to vomit on you guys,” weeps the owner’s granddaughter when she discovers her bartenders have been stealing. She doesn’t follow through, alas. 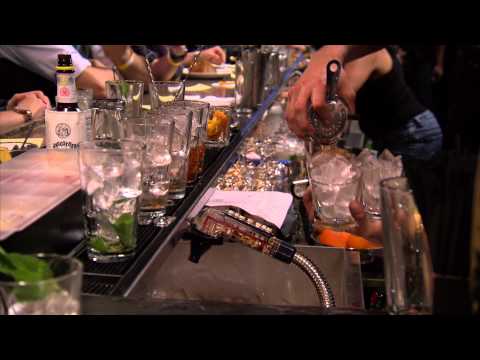 Season 4, Episode 12
For 21 years, Underground Wonder Bar was a legendary music venue hosting jazz, funk, and reggae. Then it moved to River North, a neighborhood dominated by preppy bros. They seem confused by the wispy-haired hippie owner, who performs her “unique” blend of squealing and piano jazz four nights a week. They also serve frozen pizzas, which Taffer calls bullshit on because it’s Chicago, so he hires a Santa Barbara chef to make… naan bread pizza? Because that’s Chicago, baby! He also develops a bacon-focused menu, because “43% of men would rather eat bacon than have sex,” despite the owner’s militant veganism. Once the whole thing’s stripped of tapestries and other hippie shit, it re-opens as a craft cocktail-focused place called \’clear bär\, which looks like a Panera Bread had sex with an underground brick-laden comedy club. You can hear the owner’s teeth grinding and her soul being crushed. It’s great. Except the music. Chicago bros really like ukuleles and DMB clones.

The best bit: The owner angrily asks Taffer if he dyes his hair while angrily coloring on a placemat with crayons. She later uses sign language to spell out “fuck him” to her kid. 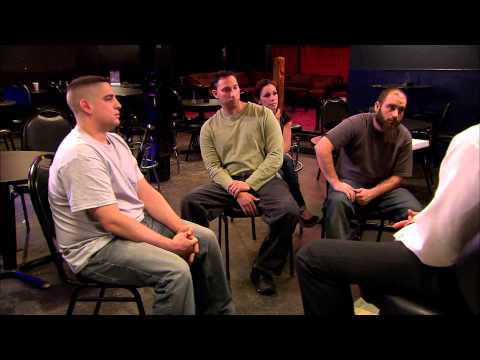 Season 3, Episode 11
Sand Bar is a legendary Vegas blues bar that used to host folks like Clapton and Etta James in the ‘70s before closing, then re-opening thanks to an OBGYN who loves him some 12-bar. It’s dingy and kinda great, but Taffer points out that 97% of people hate the blues. So they ditch it in favor of a more “local” lounge called Bar 702 (the area code!!), re-doing the cocktail program so every drink made to look like beer with the help of steins and a foaming agent (because... beer cocktails aren’t a thing?). The interior’s updated with mugshot selfie station and a bunch of digital displays showing what the bar used to be. Which, again, was a blues bar. Not a place featuring Vietnamese food, velvet-roped bottle service, and bands that sound like Arcade Fire filtered through an American Apparel ad.

The best bit: The OBGYN turns out to be a total pervert. “Just by looking at the end of your arm, I can tell you what your vagina looks like... that’s like grade-A va-geen” he says to... JON TAFFER’S FUCKING WIFE. When Taffer screams him down, he says “If I was hitting on your wife, we’d already be outta here!” So... yeah, this guy is a doctor. 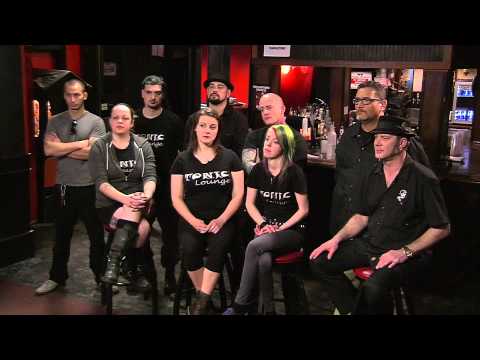 Season 4, Episode 26
Portland’s Tonic lounge is a dingy throwback bar in a little hobbit-looking building that hosts generally terrible punk and hardcore shows. When Taffer shows up he’s greeted by an empty room as perhaps the worst punk band of all time plays. There are also flying ants everywhere. Taffer’s solution? Get a better booker, improve the sound system, and change the name to Panic Room (Caution: High Volume Bar), with a gigantic sign clashing beautifully with the neighboring porn shop. He also switches the menu offerings to something that resembles a futuristic prison mess hall where food served on metal trays. Throughout, Taffer straight-up laces into the giggly, apparently stoned owner constantly. It's as if Taffer watched an episode of Kitchen Nightmares, declared Ramsay a wuss, then took it out on a guy who spends the episode giggling to himself nervously like grown-up Beavis in a goofy hat.

The best bit: The horrible band is priceless, but the best part about Panic Room’s story happened after the cameras stopped rolling. The employees kept changing the sign to Penis Room and answering the phone with the phallic name. This happened for a year before it became The Raven. 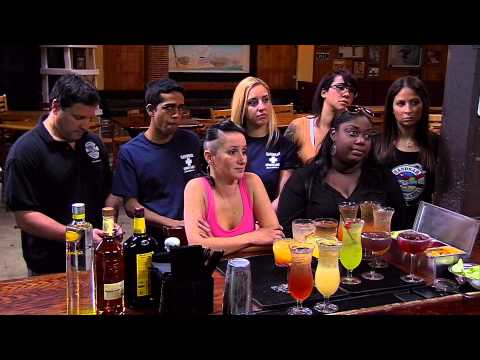 Season 4, Episode 15
In the Coconut Grove area of Miami, beloved Sandbar (Taffer loves Sandbars) becomes obsolete as yuppie millennials and affluent baby boomers take the area over. A beach-themed shithole with ripped seats, plastic-cup cocktails, and years worth of spilled Red Bull on the floor, it’s best known for serving fish tacos and huge burritos that nobody remembers eating, so it only makes sense that Taffer would turn it into a “sophisticated” Asian fusion place that served raw meat to be cooked on a hot rock. He re-christens it “The Hot Rock” because of this, and also installs TVs above every table that show lava, which is also hot rocks. Taffer and his crew use the word “sophisticated” more times than they say the F word in a Scarface. They also get “sophisticated” by using frozen juice spheres instead of ice cubes. “Some day this will be yours,” one of the owners says to his baby. You can see the kid cringe if you look close enough.

The best bit: One owner is Mr. Manager. The other is a schlub addicted to fantasy football. In a heated debate, Mr. Manager looks his partner in the eye and says, "You fucked me." Taffer then intervenes and makes Captain Fantasy apologize. "I'm sorry I fucked you," he declares. The camera lingers on their faces for an uncomfortable amount of time, then cuts to commercial. When the show returns, the line is repeated, this time with more dramatic music and zero context. 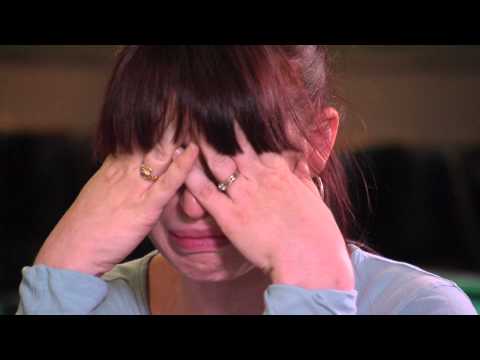 Season 3, Episode 32
When tasked with remodeling a private smoker’s club that looks like a VFW hall that hasn’t been cleaned since the Korean War, you’d think discovering the rafters are infested with raccoons could have inspired a petting zoo-themed rescue. But no, Taffer keeps the whole smoker theme, because there’s money in letting old people smoke inside. He takes the “members only” concept of KC’s Bar turns it into Johnson County Line, redoing the joint to look like a speakeasy (if a speakeasy opened in a garage next to a gas station). The best touch? A pool table that’s also a buffet. Honestly, it looks a lot like a terrible strip club with a Playboy theme, right down to a pervy old owner in a red smoking jacket. And also not any fun.

The best bit: A raccoon runs across the bar, leaving behind a trail of poop all over the bar. The poop somehow looks better than the burger that Taffer's spies order through a haze of smoke moments earlier. Also, it's totally staged. 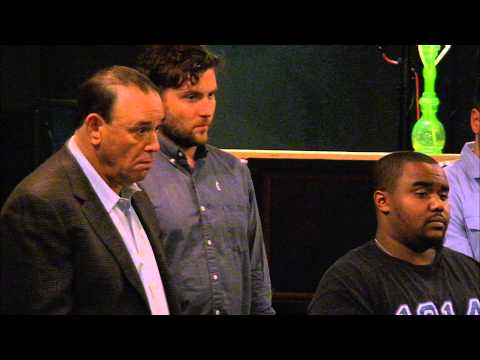 Season 3, Episode 38
Oasis is Omaha’s hottest hookah bar (also the only one), and it looks like the caterpillar from Alice in Wonderland decided to get off his mushroom and set up a vomit-covered bar in his mom’s rat infested basement/crack den. Taffer quickly realizes that the good folks of Nebraska aren’t exactly the prime hookah crowd, even when it's run by an apparent stock collection of '90s stoner stereotypes. But what they DO need, doncha know, is a classy Moroccan-themed mixology bar. Thus is born Taza, a nightclub that ditches pipes in favor of shareable punch-bowl cocktails with a bunch of straws made to look like a community hookah (they don’t!). They also hang a bunch of rugs on the wall, because that’s what Moroccans would do, and Taffer replaces the furniture when he finds semen on a couch. That was probably a strong idea.

The best bit: Taffer sends some goofy hipsters in to do recon, and the cocktail’s so gross that the beanie-wearing dude runs into the bathroom to barf. The toilet can’t flush and there’s no seat. He looks miserable, and it’s great.

Thrillist senior editor Andy Kryza hails from Portland, and has fond memories of basking in the glow of The Penis Room. Follow him @apkryza.