Not long ago, if you wanted a drink at a fast food place, you ordered a fountain soda or water. Or you asked for a water cup and then poured in a fountain soda when no one was looking. But ever since fast food chains started serving full breakfast menus -- including Wendy’s, starting March 2 -- serving coffee has been a top priority. After all, can you even enjoy a bacon, egg, and cheese if you don’t have a hot coffee to go with it? Can you? (The answer is no.)

That’s why we stopped by every major fast food chain in America to taste its freshly brewed coffee, then ranked them. We ordered a hot, black coffee at each chain to experience the full suite of flavors from each brew and used this handy Coffee Taster’s Flavor Wheel to help us describe each cup of joe. This is the best fast food coffee in America.

EDITOR'S NOTE: We excluded coffee-focused chains like Dunkin’ and Starbucks, convenience stores like 7-Eleven, and Subway, since it serves coffee from Keurig machines. We’re limiting this to chains that use traditional brewing methods.

Once you take a few sips of this musty and vegetative cup, it might be worth considering drinking the gravy instead. The gravy is addictive. That’s not even a joke.

I love In-N-Out as a burger joint, but it’s not anywhere I’d go for a cup of coffee. Even the worst fast food coffees taste like something. Sure, that something can often be only slightly better than the water that’s pooled at the bottom of a dumpster. But In-N-Out’s coffee is confounding in another way. It smells like coffee, but the second a drop hits your mouth, all flavor disappears into nothingness. The chain prides itself on high-quality ingredients, so I know it’s not just heating up water and dropping food coloring in it. But that’s what it tastes like.

There are so many distinct rubber notes in this cup that my mouth feels like a tire factory. The taste of cardboard is also unmistakable. I want to drink an entire gallon of Taco Bell’s delicious nacho cheese to get these flavors out of my mouth. If you’re looking for a hot drink option at TB, you could also pour yourself an ice cold Mountain Dew and microwave it.

If you want to get the feeling of smoking a pipe tobacco without ever needing to light an actual pipe filled with tobacco, then this is the fast food coffee for you. There is an intense amount of smoke and tobacco flavors in every sip, and it needs creamer in the worst way to cover it up. Luckily, you are not bound by any Thrillist Taste-Test Laws to order it black, so pour in at least two lil cups of cream and three packs of sugar before indulging.

This coffee is overwhelmingly burnt. There’s also some seriously meaty notes. If you think “meaty” is not a word that can be used to describe coffee, I’ll direct your attention once again to the flavor wheel. Wendy’s will be serving breakfast nationwide next month, and I hope it considers changing the coffee blend to better complement some pretty good biscuits.

Many years ago, I went on a press trip to the Scottish distillery Lagavulin, located on the Scottish island of Islay. The scenery was breathtaking, and I was lucky enough to drink the best scotch I’ll ever have in my life. One of the drams I sampled was from a now defunct distillery that was so smoky and intense, I was unable to drink much more than a couple sips. Carl’s Jr.’s coffee is the scotch of fast food coffee.

Sometimes coffee smells better than it tastes, and White Castle’s java falls squarely in that camp. That said, there’s some grain, smoke, and wood notes that are fairly pleasant, and an equally fairly smooth finish. Sure, it’s a bummer that it smells fantastic and doesn’t quite deliver, but it’s also good enough that you’ll wonder, Am I really drinking this in a White Castle?

I’ll be honest, my expectations for finding a decent cup of coffee here were low. What are the odds that the same chain that serves a Sriracha Curly Fry Burger Munchie Meal (we can’t make this stuff up) pays any attention to the quality of the coffee? But it does! Jack in the Box uses 100% Arabica beans, which is a step above the Robusta varietal used in supermarket instant coffee. (In all fairness, 100% Arabica beans are standard in fast food.) Now for the bad news: there are unavoidable green/vegetative notes. And it was hard to ignore the smoky, burnt flavors in the finish, but I was pleasantly surprised by its roasty, cereal notes. Would I pair this with an over-the-top Loaded Breakfast Sandwich? Yes. Yes, I would.

America’s Favorite Drive-In sells Green Mountain Coffee. Yeah, that same brand you know from the Keurig machine in your company’s break room. So you won’t be surprised to learn that it tastes quite similar to its already familiar coffee. Here’s the difference: Sonic actually brews it. It’s not coming from a Keurig, and to me it tastes marginally fresher than my preconceived notions of Green Mountain. Cocoa and wood are the two primary flavors here, and while it’s not something I’d ever spit out, there are other fast food joints at which I’d rather order coffee.

I’m always charmed by the McCafé branding on coffee cups at Mickey D’s. I associate McDonald’s with the unhealthy amount of fountain Coke + soft serve ice cream drinks that I used to consume as an after high school snack, so to now see the chain commit to using a very fancy French accent mark on its cups of coffee is cute. But you can’t fool me, McDonald’s! I remember when you were just a humble company that sold “over 95 billion hamburgers!”. The coffee is worthy of that accent mark, as there’s a host of cocoa notes, and not an overwhelming burnt flavor (though there are some cardboard notes, unfortunately). The finish isn’t too bitter, either. It’s obvious how with a splash of cream and a couple sugar packets, this is a fine coffee option to pair with a McMuffin or Donut Sticks.

The venerable Georgia-based chain strangely is not encouraging its customers to order hot coffee. It wasn’t found anywhere on the menu when I stopped by a Denver-area location on a recent weekend. Instead, the chain features its original and vanilla cold brew, both of which are quite good. And that’s a shame, because the hot coffee is delicious as well.

It wins points for brewing specialty, sustainably sourced beans from Thrive Farmers. The chicken-obsessed restaurant claims each cup has “creamy notes of caramel and cocoa with a light citrus finish,” which isn’t quite what I tasted. That said, I got plenty of nuttiness and cocoa notes up front, and unlike many of the other coffees I tasted, it doesn’t finish too bitter (though I can’t agree with the claim of a citrus finish). Overall, it’s a rich, fine cup of coffee worthy of being served at a coffee shop, let alone a fast food chicken chain. 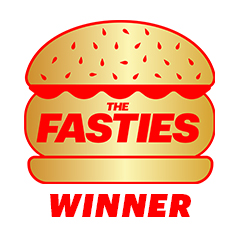 I have a theory about Culver’s: Everyone dining there is either pushing 85 or is still in preschool. Based on my multiple visits to the chain, I don’t think there is a more popular place for people who lived through the Great Depression to treat their grandkids to burgers and frozen custard. I am neither very old nor very young, but I get why this is a popular gathering spot. Culver’s is extremely delicious. Even its coffee. Especially its coffee.

After a super kind Culver’s employee drops the coffee off at my table (tableside service at a fast food place? Oh là là!), my eyes were immediately drawn to the writing on the coffee cup. Here are the pertinent facts: It’s Blue Spoon Blend java (named after the slightly more upscale restaurant concept Culver’s operates in Prairie du Sac, Wisconsin), and it’s roasted by Sheboygan’s Torke Coffee. The java is Rainforest Alliance certified and incorporates beans from a Pacific island mountain region and Latin America.

The cup invites me to taste smoke, cocoa, berry, and fruit. While I do get a little berry and some burnt notes common to every single cup of fast food coffee on planet Earth, the overall freshness is what’s immediately notable. Perhaps it’s because this coffee is roasted in smaller batches than any coffee from a fast food brand with a larger restaurant footprint. No matter, this is the best-tasting cup of $1.99 coffee in fast food. It’s a full bodied, smooth, delicious cup that features smoke and tobacco notes up front, and a satisfying, pleasant finish.

Introducing The Fasties, Thrillist's first fast food awards. Think glitzy TV and movie award show, but to honor the best things that came out of fast food restaurants in 2019. We rolled out the ketchup carpet for fast food’s biggest names and handed out golden burger trophies in 16 categories. Watch the full awards show and check out the winners here.
Sign up here for our daily Thrillist email and subscribe here for our YouTube channel to get your fix of the best in food/drink/fun.
Lee Breslouer is a writer and editor based in Colorado. Follow him @LeeBreslouer.