The Next PBR: 22 Old Beers Ready for a Rebrand

Pabst Blue Ribbon. The beer that made it cool to drink cheap beer. The brand that figured out Millennials before anyone else, then sold a metric fuckton of adjunct lager to 'em. As the flagship of Pabst Brewing Co., and the proud recipient of exactly one blue ribbon for being "America's Best" beer at Chicago's 1893 World Columbian Fair, PBR's brilliant reinvention turned it into a hugely successful retail metonymy for The Hipster (along with American Spirit cigarettes, Ray-Ban Wayfarers, et cetera).

But Joseph Pabst's namesake brew is far from the only affordable, sorta-retro #dadbeer on the shelves, so now that it's firmly established in the ironic bottom slot of the nation's beer menus, we're looking for what's next. Below, find 22 American beers that we humbly hypothesize to be capable of following in the Blue Ribbon's impressive rise to the highest heights of the deliberately low-end beer market.

Year released: 1885
Most marketable feature:MASCOT, BEING FROM A CITY IN THE EARLY THROES OF GENTRIFICATION. Natty Boh has been Baltimore's beer for ages, and the Orioles' official brew partner since 1965. More so than even a full DVD box set of The Wire Seasons 1-5, the monocled Mister Boh is an emblem of the Mid-Atlantic. As Baltimore continues to try to woo Millennials to shore up its beleaguered economy with a new tax base (and to partake in its shockingly solid food scene), the Boh could find itself well-positioned to capitalize on blue-collar-hero beer vibes.
Irony factor: STAGGERING. "Am I drinking this because I want to, or because Baltimore is a case study in post-industrial urban decay, and I'd like to associate myself with the glorious, gritty rebirth of a once-proud American city, instead of my actual self, which is unremarkable and thoroughly white?" is a question you will be able to pose often.
Taste: On a scale from "yellow" to "seven," it's a hard "yes."

Year released: 1939
Most marketable feature:BOTTLE, LABEL, "33". "From the glass-lined tanks of Old Latrobe..." begins the quality promise that Rolling Rock famously slaps onto every one of its beers. (The whole graphic used to be painted on -- a truly unique touch for a mass-produced brew -- but those days have sadly passed.) It's a somewhat-rare light American lager that comes in the emerald glass bottle. The Pennsylvania brew is actually doubly iconic, in that it's hugely popular in the 7oz "pony" size, as well as the standard 12oz. Then, there's the mysterious matter of the "33". It comes on every bottle, and its origins are murkily linked to horse racing, linguistics, and company lore. Beer-lluminati trivia? Sign us up.
Irony factor:GALLOPING. The Rock has a lot going for it, but the strongest draw is that it seems way classier than it is. Just like you. It's the perfect wink-wink, nudge-nudge.
Taste: Fresh-ish.

Year released: 1883
Most marketable feature:LABEL, OBSCURITY, TEXAS-NESS. Like pretty much everything else on this roster, Pearl boasts a red & white label. Hey, if it works, it works, right? This brew is the oft-overlooked third brother of the Lone Star State's budget-priced beer scene -- Shiner and Lone Star both have vastly larger footprints. This makes Pearl the off-beat, unexpected choice. Score.
Irony factor:BIG, LIKE EVERYTHING IN TEXAS. It's a solid chance that none of your non-Texan friends have ever heard of this beer. You would be so fucking cutting-edge.
Taste: Beery -- that's a given.

Year released: 1873
Most marketable feature: LABEL, BOTTLE, AMERICAN-NESS. Its stout brown bottle is wrapped with a handsome gold label that recalls a time when the American West was full of American men that talked like Sam Elliot, who is American. America!
Irony factor: HIGH. Banquet bats the cycle. It's emphatically not-fancy. It's got a few too many calories. Until recently, it's been marketed toward loggers, not bloggers.
Taste: Rockies-esque.

Year released: 1890
Most marketable feature: LABEL, SLOGAN. 'Gansett used to have the market cornered on all of New England. Those days are gone, but the Rhode Island-born brew still lays claim to one of the most intentionally tacky tags of all time: "Hi neighbor! Have a 'Gansett!" The white can with its red/green label is instantly recognizable throughout the Northeast, where it's regained its popularity (despite being contract-brewed in Rochester, NY.)
Irony factor: WICKED. Drinking Narragansett will make you feel like a grizzled salt-and-pepper commercial fisherman who works hard on the high seas to earn a living. Presumably, you are not that, so opportunities for hilarious juxtaposition are myriad. Also, it was the beer of choice for those guys from Jaws, which is neat!
Taste: Very decent actually, but that's completely beside the point.

Year released: 1876
Most marketable feature:SLOGAN, BEING FROM THE PAC-NORTHWEST. "It's the Water." What's the water? Who knows! But it is, and it works. Washington State, you give us so much.
Irony factor:CELESTIAL. This is the beer favored by Evel Knievel. Evel Knievel rode a motorcycle. By the transitive property... uh, something.
Taste: Existent, for sure.

Year released: 1902
Most marketable feature: CHICAGO'S DEEP INSECURITY, LABEL. Harry Carey famously drank Budweiser -- a lot of Budweiser -- and cocktails, but not Old Style so much. Besides, despite its longtime popularity in Windy City dive bars, this brew is actually from Wisconsin. And if there's one thing Chicagoans don't like, it's feeling their closely held food & drink traditions are actually just knock-offs of somewhere else.
Irony factor: HIGH HIGH HIGH. With its red/blue shield and the diagonal line that bisects it, Old Style cans can be mistaken for PBRs at a quick glance. Which means you might get an opportunity to condescend to someone that "you used to drink Pabst, but it got way too mainstream." Which, like, yes.
Taste: Literally whatever. 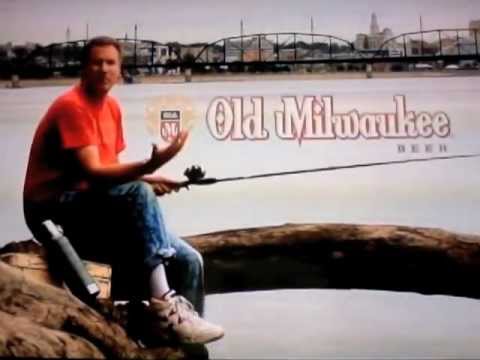 Year released: 1890
Most marketable feature: LABEL, WILL FERRELL. The white can and metallic red scheme recall old-school signs from an auto body shop or something, which is totally killer. But Old Mil's trump card with "the youths" is indubitably Will Ferrell, who cut a bunch of hysterically bad commercials for the brand a couple years back.
Irony factor: SPLENDID. Even though its food & drink scene is gluttonously badass, Milwaukee is still home to plenty of Rust Belt corporate detritus -- much of it in the form of shut-down breweries. So Old Mil has the whole "faded glory" vibe going for it. Plus, it comes with a built-in bit of lore: the long-forgotten Swedish Bikini Team, one of beer advertising's most marvelous disasters.
Taste: Will Ferrell's early career highlights, and, like... yeast?

Year released: 1855
Most marketable feature:SLOGAN. One of many fine bottom-shelf brews from Minnesota, Schmidt is the only one that can lay claim to being the Official Beer of the American Sportsman. In practice, this means dudes named Clive & Clint drink the stuff while huddled together for warmth in a deer blind. To a 9-to-5-er living in a city, daydreaming for the heartland's wilderness, it sounds like the exact sort of marketing escapism worthing paying $4 to be a part of.
Irony factor:LIT. Have you ever shot a 10-point buck from 1,000yds in the cold lakeland predawn? No? Then, yeah, this is perfect.
Taste: Definitely drinkable.

Year founded: 1951
Most marketable feature: CANADIAN-NESS, OBSCURITY. As America's hat, Canada has always been a natural destination for America's counter-cultural firebrands. (Well, them, and all the 18-year-olds in upstate New York who wanted to drink legally, too.) This serviceable pilsner has been the country's bestseller for decades, but it's had a hard time retaining the popularity it held south of the border in the '80s.
Irony factor: NORTH OF CANADA. In 2013, USA Today named Labatt Blue as one of nine beers that young drinkers no longer bothered with. They're not kidding -- the brand took a 28% beating in US sales between 2007-2012. Which means it's perfectly available to become your oddball go-to.
Taste: Le adeqûetté.

Year released: 1883
Most marketable feature: BROOKLYN-NESS, LABEL, OBSCURITY. Named for the German river and Wagner's opera, this NYC-born brew was headquartered in Bushwick for almost a century before shutting down in the '70s and emerging under different management around the turn of the century. Its red & white scheme is a lo-fi classic, if you can find it.
Irony factor: GIGANTIC. The site of the original Rheingold brewery was on Montieth St in Brooklyn. The original building is long gone, but these days, developers are trying to turn the plot into condos, because, y'know -- Brooklyn.
Taste: Palatable and immaterial. 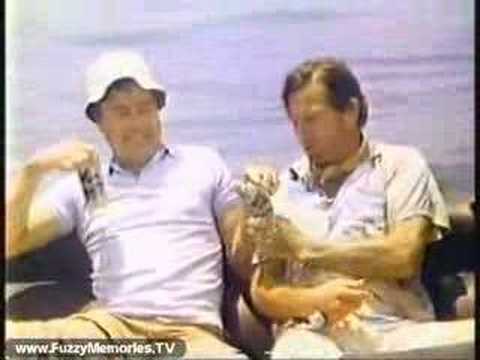 Year founded: 1850
Most marketable feature: BEING FROM A CITY IN THE EARLY THROES OF GENTRIFICATION. It's a total mystery why Stroh's has yet to be borne up by the wave of consumerist goodwill coming out of Detroit these days. Back in the day, it was the king of Motor City brews. Nevertheless, with an unparalleled dive bar scene and an influx of young drinking folk who own beanies, Stroh's is set up for a comeback.
Irony factor: LARGE. In the '80s, Stroh's found itself in a race with Coors to establish national distribution. Coors won -- at the time. But now, the Silver Bullet is as mainstream as can be, and Stroh's is exactly the sort of scrappy underdog you'd want to be drinking in a bar that used to be a village jail.
Taste: Stroh my god.

Year released: 1905
Most marketable features: OBSCURITY. Lions Brewery is one of the oldest in the country, but since it shares the same state with Yuengling (the country's singular eldest), it never gets the same shine. Only recently has its flagship brew begun making its way beyond the borders of the Keystone State.
Irony factor: VAST. Lionshead is a moderate unknown in bars outside of Pennsylvania, which makes it mysterious. Mystery, on its own, isn't ironic. But a mystery that you deliberately initiate without being able to solve? Now that's ironic. Maybe. Whatever, just drink it.
Taste: Like a mouthful of noise.

Year founded: 1842
Most marketable feature:BROOKLYN-NESS, SLOGAN. Yet another one-time titan, Schaefer went huge from its humble digs by the waterfront in Williamsburg (not far from the Brooklyn Brewery location there.) Dubbed "the one beer to have when you're having more than one," it's perfect for drinking the day away or backing up a shot of well whiskey.
Irony factor: YEP YEP YEP. It's from Williamsburg, a neighborhood that once defined hipster irony before becoming too expensive and mainstream for them, which of course, is tremendously ironic.
Taste: Yep yep yep.