Does Drinking Actually Make You Better at Bar Games?

Last weekend, as my winning foosball shot soared into my opponent's goal with a resounding rattle, his face went slack and his shoulders slumped. Defiantly, that foosball-losing jerk Larry told me, "Whatever, if I had a few beers, I would have won -- I'm so much better when I've had a few."

You've probably heard this claim floated across pool and air-hockey tables, cornhole and dart boards, beer pong cups, and shuffleboard dust, because the common belief is that a little liquid lubrication raises a player's game. But does it really?

I needed to know for sure -- mainly to prove Larry wrong. I turned to medical experts as well as professional players in some of the biggest bar-game leagues (including the women's cornhole world champion!) to try and uncover some semblance of truth in this boozed-up belief system.

What does the women's cornhole world champion have to say?

"If I don't have a drink in my hand, I'm not sure I'd even be able to hit the board. I can't play sober at all, period," Stacia "Queen" Pugh told me -- and this is coming from the two-time (and current) ACO women's world champion, the "NFL of cornhole," according to Pugh. So, yeah, she's fairly proficient at the bag toss.

Pugh prefers to drink "dry red wine," and says she absolutely must keep a solid, consistent buzz if she is playing, or it will totally skew her game.

"I need it to calm my nerves, relax me -- you know, give me some confidence."

Is there a sweet spot of just-enough drink?

"It is a dangerous game: my partner calls it the 'happy place.' It's almost like a bell curve. You need to drink up to a certain line (the 'happy place') and you need to ride that the entire day. If you overstep that line and become too intoxicated, things go downhill very quickly. You need the exact right buzz that gives you the confidence and benefits -- without falling over."

Pugh has it down to a science: cornhole tournaments can sometimes last eight to 10 hours, so she usually has one glass before she throws a bag ("it's pointless to even start off sober"), and another before she actually plays for real ("I call it, two deep and ready to go"). Then, she sips her third glass while playing for about two to three hours. After that, she'll feel it out and usually just keep sipping at her own pace, usually one glass every two or three hours.

Are there medical benefits to drinking before a bar game?

Doctor and author Patrick Neustatter, who (full disclosure) admitted to being "quite a bit better at darts after half a pint," conceded there are some physiological and psychological benefits to drinking before playing bar games.

"There are a lot of things happening to your body when you consume alcohol. It relaxes the muscles, and it can definitely deliver what you would call 'liquid courage,' or 'Dutch courage,' -- there have been archers who have been known to drink to calm their nerves before competitions, or reduce tremors, which kind of goes along the same idea. I have also heard of famous pool players using alcohol to reduce tremors, and relax muscles. It's mainly a combination of relaxing the muscles, and relaxing you. 'Choking' is something that alcohol may help you avoid in a big moment of pressure -- alcohol tends to reverse that tendency because it puts you at ease, in the moment."

In his personal and professional experience, the doctor admits that alcohol can aid performance in these types of games because they are sedentary. Athletes in highly physical sports -- like basketball or football -- could be harmed by consuming alcohol before a game because of its dehydrating and disorientating effects on the body. And, harking back to Stacia's "happy place," there is definitely a line where too much alcohol can murder your poise.

"For games like this, there is probably a limit, maybe around .02% BAL, where the legal intoxication line here is .08. So, it's just a slight intoxication where these benefits would come into play, without any of the harmful effects like confusion, loss of balance, and things like that. The amount of alcohol in your system is crucial.

"For me, playing darts in a pub, after half a pint I was at my best, and it was always downhill after that."

What does a professional darts player think?

Robert Sinnaeve is the president and CEO of the North American Professional Darts Alliance, and was at one point ranked the #4 dart player in the entire world. And in his mind, drinking has no place in the world of serious dart players.

"Without exception, I never drink while I'm playing darts. Alcohol isn't even allowed in professional competitions. The truth is, it just kills your accuracy, your strategy, and impairs you. Even if I'm going to be playing casually, I don't use alcohol."

Sinnaeve advises that, even if you are playing casually, you abstain from drinking -- that is, if you want to win. "In my opinion, it doesn't do anything to help your game." 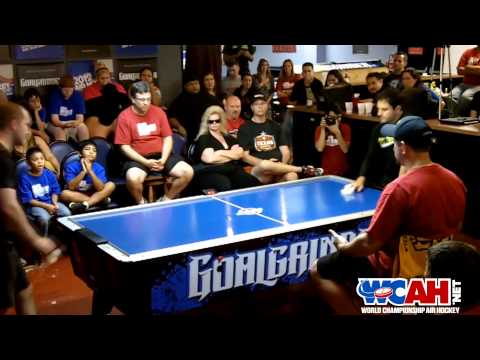 Does a professional air-hockey player agree?

"I have experience on both sides -- I started playing competitively in college, and there was definitely drinking going on in those matches. But professionally, I can't be drinking when I play -- no way," said Chris Lee, a professional air-hockey player, and co-founder of the Air Hockey Players Association.

"People consider air hockey just to be a bar game -- but it's so much more than that. If you are playing seriously, you need to have your reflexes in check, and there's a lot of strategy involved. I'm not sure if you've ever seen a pro air-hockey match, but these guys can hit spots with pinpoint accuracy. You can't be doing that when you are intoxicated."

Lee did concede, however, that for amateur players, or for those just playing for fun, alcohol can have some benefits.

"I mean, it is true that some people believe alcohol can help them play better. It does relax you, maybe gives you some confidence, but your reflexes can suffer at a higher level. So, it goes both ways. Really, it depends on the scenario."

So, what's the consensus? Should you be drinking before playing bar games?

Alcohol definitely has some benefits in the realm of the bar game (maybe that's why they put these games in bars to begin with?), though serious, professional players shy away from drinking, for the most part. But really, are any of us mortal ping-pong/pool/foosball/air-hockey players worried about playing on an elite level?

"For the casual player, as long as it is a game that doesn't involve high amounts of strategy and reflex, I think a small amount of alcohol could potentially help," Dr. Neustatter told me. And Pugh agrees. "I'm just an anxious person, but alcohol treats that for me," she says. "I've played in front of crowds, hundreds of people, and I've been on fire. That absolutely would not happen without the hints of alcohol. No chance. It converts me from being scared to play in front of people, to wanting to play in front of a crowd."

The biggest takeaway here is that drinking a little bit should help the casual gamer. Which means that jerk Larry was right. Just make sure you don't overdo it, because there is a line you do not want to cross.

"One time, I unfortunately did drink too much, and I tripped over the board in front of a huge crowd," Pugh said. "Yeah, it wasn't great."

Wil Fulton is a staff writer for Thrillist. He's pretty good at foosball. Follow him: @wilfulton.