How to Talk Your Way Past the Bouncer, Every Time

That's why I called in my close personal friend, former head of International Kidnapping for the FBI, author of the upcoming book Never Split the Difference, and overall badass mofo Christopher Voss to get his tips on how to talk your way in. I needed to learn these impenetrable bouncers' ways. To understand their whims and unspoken desires. To discover what makes them tick, and use that knowledge to my advantage.

Basically, I just want to get into the bar because all my friends are in there and it's cold outside, OK?

Rip your bribe money in half. Seriously.

Money is, of course, the ultimate motivator. And in this case, simple bribery may be the cleanest path to your entrance. How can you ensure the bouncer won't just pocket your bills and leave you hanging like yesterday's laundry? It's better to be smart than smooth, guys.

"This is something I use myself pretty frequently, when I'm out trying to get a good table at a restaurant, or whatever. Instead of just handing the 'gatekeeper' a bill, rip it in half first. Make sure they know you have the other half. It's obviously implied you will give them the other half when you get in. This creates a relationship, and a sense of collaboration between the two of you. They know you need to work together in order to make that bill worth something. It will also set you apart from the troves of people waving bills like pork chops in front of a dog," Voss said.

"I learned this trick from an old NYPD cop, actually. Aside from the motivation of money, psychologically, it creates a bond between you and the bouncer. A subtle hint of 'we're in this together.' It is super effective."

And yes, you can still use the ripped-in-half bill.

Flattery will never, ever, ever work

"Think about what a bouncer is going through," Voss told me, "they have people coming up to them every five seconds, trying to butter them up -- they are jaded by it. Not to mention, if someone actually belonged inside, and not in line, they wouldn't have to do stuff like that in the first place. So, it's sign you don't belong. It comes off as insincere. They know you are full of shit."

"Flattery is what everyone tries. You will be viewed as one of the crowd, and someone who doesn't deserve to enter."

"So, flattery isn't the way to start off. Instead, start off with an apology. It's that simple. 'I'm sorry.' It diffuses the fact that you are bothering them. It appeals to them, and disarms them. It doesn't make you sound weak. They know they have the power in their hands, in this situation, anyway. And, it immediately gives them an extra twinge of empowerment -- which is what you want. You are their source of power here, and being a little submissive is giving you a mental advantage, right away -- even if it appears to be the other way around," Voss said.

"I had a colleague go to the Philippines to work an a very difficult, high-profile case. When he came back I was astounded by the amount of evidence and testimonials he was able to collect. His secret was the simple 'I'm sorry' to start off with to diffuse the situation and gain an edge. It then became standard procedure for me, while negotiating."

Don't bother asking for their name, give yours instead

"Another mistake people immediately make, is asking the bouncer for their name. As if that will help them get through," Voss said. "Instead, give them your name. Say, 'Look... I'm Chris.' This is the bedrock of so many negotiations I've been involved with. It's amazing what putting a name to your face can do to someone's perception of you.

"If we were negotiating hostages, we'd always make sure to use the hostages names as much as possible. It's humanizing. There have been times where I've been attacked, or have been threatened, and have just said, 'Look, you don't want to do this to me, I'm Chris.' It sounds kind of silly, but in the aggressor's mind, you become a distinct human, and not just an adversary. By turning yourself into a person, and not just another anonymous face trying to weasel in, you start to make the bouncer relate to you, and your situation. Which is the ultimate goal. You go from one of the random 8 billion people on Earth, to a single human, with a name." 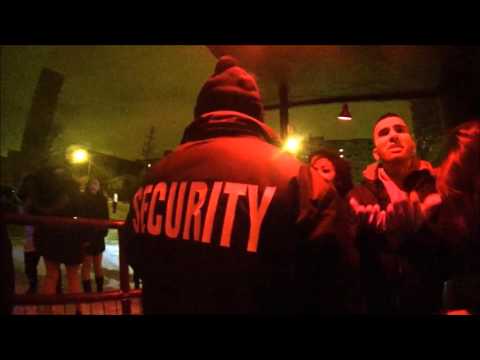 "A lot of the time, being a bouncer is not that great. Imagine the abuse your average bouncers sustain during the course of the night. They are sick of people trying to get past them with tricks -- which, admittedly, is exactly what you are trying to do. But use the fact that you are self-aware to your own advantage," said Voss.

"Be self-deprecating. Tell them, 'Look, I know every schmuck in here is trying to slither past you to get into the club, and they don't appreciate the fact that you know all of their cons and stupid tricks -- it must be tough to deal with that all the time.' Again, don't fall into pure BS flattery... but try to relate to their situation. Make fun of the ridiculous club girls/guys who treat bouncers like dog shit. Point out all the intoxicated people being jerks. Get on their side, and in their frame of mind. Treat them like a person," he added. "It shouldn't be that hard!"

Be kind, respectful, and positive

"Bouncers occupy a weird space -- they have all this power in the moment, but overall, many of them belong to a lower rung in social hierarchy than the people trying to get in the bar or club. You can definitely use this to your advantage -- by using all the tips I previously gave you, and by just treating them with simple kindness and unforced respect.

"When you approach a situation with an overall sense of positivity and good nature, you automatically trigger the neurons in other people's brains to make them feel a sense of well-being, too. Be happy to see the bouncer. Smile. Don't be a jerk. This is the most basic advice I can give anyone approaching a negotiation. It's so simple, but so often overlooked."

"At the end of the day, the best way may be putting a smile on their face," Voss said. "I remember once, a panhandler stopped me in the street, and asked me, with a straight face, if I'd like to 'donate to the United Negro Pizza Fund.' This stopped me in my tracks, and I gave him some dollars. After that, I'd go out of my way to pass by his spot, and give him money every time I was in town.

"People can turn down, or cast aside a random person. They won't care. But once that random person turns into a human, who can be empathized with, or related to, favorably, this is when pure rational judgment ends, and emotional decisions start to guide people's choices. This is what you want. And it's the only way to be successful."

Wil Fulton is a staff writer for Thrillist. Bouncers still hate him. Follow him: @wilfulton.