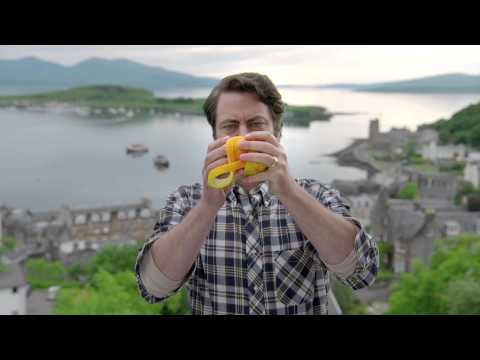 Earlier this week, we all put our Christmas playlists on pause to loop Nick Offerman's delightful musical ode to Scotch. But it turns out Swanson had a lot more stashed up his flannel sleeves. The makers of Oban and Lagavulin have dropped four new installments in Offerman's "Tales of Whisky" series over the past 24 hours, and they're all unsurprisingly hilarious.

The first was "That's Not Lagavulin", which sees our hero jetting across the globe to prove a point to an utterly inept bartender. Next came "The Makers of Oban" (Offerman in various disguises plays all the employees of Oban) and then "Poetry" (Offerman reads a touching poem about asses to the distillery dudes). Perhaps the best, though, is this latest installment, "Taste it All". In it, Offerman tastes the direct source of each of Oban's flavors, meaning you get to see him eat an orange rind, lick a barrel, and even lick an employee. It's the most majestic sexual harassment you'll see all day, so get to it.

Kristin Hunt is a Food/Drink staff writer for Thrillist, and would buy a book of Nick Offerman's poetry. Follow her at @kristin_hunt.