Army Staff Sergeant Matthew Riker and his squadron were stranded in the middle of the Afghani desert. More than 30 hours had passed since they were air-dropped via chopper. What was supposed to be a brief air assault mission in a remote region had become a grueling day-and-a-half excursion into enemy territory. Their water was gone. Food totally depleted. They had to stay up all night. Morale was critically low.

"We had faced down a sandstorm. Someone messed up along the way and our supplies were gone. It was hot as hell," Riker said. "To put it bluntly, shit was sucking."

At their darkest moment, hours before they even stood a chance at making contact with another squad, one of the privates piped up and hesitantly told his team (including Riker, his direct superior) that he had bent the rules a little bit. He had six Rip Its stashed in his backpack in lieu of some other essential supplies.

"They were hot as hell. And it was against the rules, sure. But at that moment I wasn't even mad. It might have been the only thing that got us through those last few hours," Riker said.

There's a chance you've seen the discount energy drink Rip It buried in convenience-store shelves alongside Monster, Red Bull, and Rockstar. But it's no household name. Frankly, it's not very distinguishable among a sea of nearly identical competitors with more pervasive marketing and bigger parent companies.

But Rip It has carved a unique niche in the energy drink world: It's ingrained in 21st-century military culture.

Riker's mission took place in 2010, but Rip It's prevalence in military life had been growing in Afghanistan and Iraq during America's campaigns throughout the 2000s, and it's still popular today. Riker conservatively estimates over three-quarters of military personnel are drinking this stuff on the regular, and almost everyone in uniform -- particularly those serving in the Middle East -- has at least tried it.

"If someone served over there and says they didn't at least try a Rip It, they're not being honest with you," Riker said.

Some soldiers roll out of bed and pop open a can. Riker caught privates filling their CamelBaks with the stuff in lieu of water and sipping it through a straw. Soldiers would play Rip It drinking games as if they were at a caffeine-addled frat party. The drink is referred to nearly exclusively as "crack."

A single energy drink essentially fueled the American military during the recent Middle East conflicts and almost no one outside the Army (or hypothetical energy drink-addict support groups) has even heard of it. Yet among those who serve, it has achieved near-mythical status.

For the uninitiated, it's all here: the good, the bad... and the inevitable diarrhea.

What is Rip It?

It's a basic energy drink comprised of taurine, 100mg of caffeine, inositol, and guarana seed extract -- all the usual suspects. It has 15 flavors -- including grape, citrus, and even coconut mango -- plus a sugar-free version. Stateside it's mostly known as a bare-budget option, often costing $1 per can and almost always gathering dust on the shelf.

Rip It is owned and distributed by National Beverage Corp., the company behind the hipster-approved LaCroix and Michigan's Juggalo-approved Faygo. The Corp. struck up a contract with the military circa 2004 to offer the energy drink in US military installations across the globe, especially in the Middle East. (The terms and conditions are unknown: Neither NBC nor the Department of Defense responded to requests for comment.)

That military connection is essential to the brand image. Rip It's social media profiles are littered with photos of soldiers. It manufactures camo-laden cans and proudly highlights military charities in promotional materials and on banner ads.

In addition to being purchasable at military commissaries, Rip It is also commonly provided for free to soldiers by superior officers. With such a high demand, it became a regular "morale staple" included on trips and convoys alongside food, water, and bullets. That helped it become a phenomenon among the men and women in uniform who consume it voraciously.

"It caught on because it was an energy drink and it was free -- not that complicated, really," said Riker. "And yeah, people slam them a lot over there. Like, a whole lot. Almost definitely more than anyone would expect or could imagine." 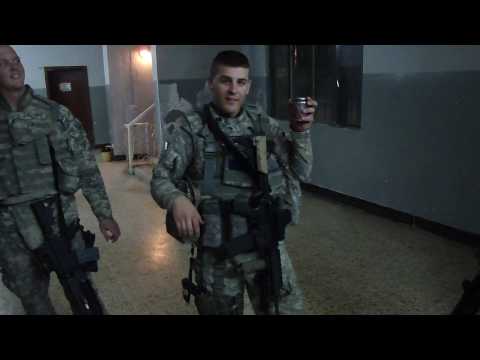 Daniel -- who declined to share his last name -- was enlisted in the Marine Corps from 2006-14. He was deployed twice to Iraq and once to Afghanistan. When he first tried Rip It he never thought it would be something he would or could drink regularly. This aversion didn't last.

"When I first tasted it, it was like 'oh God, this is awful.' But it's something you get used to very easily," he said. "When people now ask me what I know about Rip It, I tell them I know enough to have withdrawals."

Daniel would never actually buy the drink in commissaries. He didn't have to. It commonly came down the supply chain.

"When we went out on convoys or for patrol, Rip Its were something we'd stock up on and toss in the cooler. But everyone would be trying to save them. It was a 'take as needed' system, but it was definitely abused," he said. "There was a population of the younger Marines that were intensely focused on drinking Rip Its all the time. It became a running joke that some people had Rip Its instead of blood running through their veins."

The use of energy drinks during the US' stints in the Middle Eastern theater is certainly not the first time our military has used stimulants in the field of battle; caffeine and war go hand-in-hand. Civil War-era letters analyzed by historians document soldiers mentioning "coffee" more than words like "bullet" or "mother." Rip It is the 21st century's version. Its excessive usage in modern American warfare could be chalked up to a few factors. The general boom in energy drinks -- the "explosion of popularity" is generally timed around 2005-2006 -- coincided with Rip It hitting the military. So people in general were guzzling an obscene amount of energy swill already. When they got to the Middle East, they just continued the habit and switched brands.

And perhaps most importantly, soldiers can have a tendency to have more addictive personalities than the common population. Which can be problematic, even with discount energy drinks.

"I think service members in general have very addictive personalities, whether it's chewing tobacco, getting tattoos, or chugging Rip It. It became one of those items people kind of just latch onto," Daniel said. "When you are on deployment there's no alcohol. So people seeing Rip It as a substitute makes sense. I mean, we had guys rolling out of bed and cracking open a can before they even brushed their teeth."

Riker saw the phenomenon from a superior officer's perspective.

"When soldiers get bored, they do some pretty dumb shit. It's actually kind of impressive how they come up with stuff to entertain themselves. People shotgun them for sure, and have competitions that revolve around how fast they drink one -- or multiple cans. Honestly the most exciting stuff probably happened behind my back," he said.

While providing bursts of energy is a plus, drinking energy drinks in excess can have consequences. Riker noted that officers had to start (unofficially) keeping tabs on how many cans soldiers were bringing out on missions, and though he "appreciated the sentiment that guys wanted to be alert and ready to do their jobs," the negative ramifications of being overcaffeinated can certainly impair working soldiers. Not only did soldiers commonly experience "crashes," but overuse could affect performance for days.

"When guys are on graveyard shifts at night for hours at a time with only one other person, it gets to the point where you are falling asleep standing up," Riker said. "You need something to keep you going. That's when guys would overdo it and it might become a problem. You get jittery, then you have a restless night of sleep. Then you wake up and it's almost as bad as being hungover."

Dr. Kurt Eifling was a Navy physician on active duty from 2009-13. During his year on the ground in Afghanistan he was responsible for the well-being of 700-1,400 Marines at a time. He said that during wartime, soldiers turn to alternatives when the comforts of home are unavailable. Rip It provides one of those comforts.

"The urge to self-soothe is greater in those high-stress situations," said Eifling. "You can't just call your brother or have a beer or even lay down on a couch and watch TV. All those things are gone, and people look for things that will fill the void. And sure, Rip Its and energy drinks in general probably did that for a lot of people."

Eifling said the excess of energy drink consumption seldom manifested beyond some irregular heartbeats and a couple cases of kidney stones. But dehydration can be a life-threatening issue during periods of heightened physical activity in stifling climates, one that energy drinks (despite being liquids) don't help.

"The first thing to break down wouldn't be your brain or your decision-making like on some much stronger stimulants, but likely your heart," Eifling said. "Of course, choosing Rip Its over water -- which people definitely did -- led to dehydration, which then could lead to some serious concentration and cognitive issues."

Not only do energy drinks dehydrate the body, they make soldiers feel full -- so they don't actually want to drink water.

"It's already a pain in the ass to get the guys to drink enough water," Riker said. "This only made it worse."

But Riker did note that it was generally the younger contingent that drank Rip It excessively while the older guys stuck to coffee. Was it a sign of maturity?

"Look, almost everyone drank it once in a while, but there were definitely the 'Rip It guys' who had the drink in one hand and a cigarette in their mouth at all times," he said. "And they probably do the same thing back at home, right?"

Maybe. Or maybe back home it's a beer instead.

There’s also one side effect that blurs the line between benefit and negative, depending on the situation.

"I will tell you one benefit of Rip It," Riker said. "If you are constipated, drink some. That will never fail to get things going. Ever.

"Actually, that could be a negative, too, I guess." 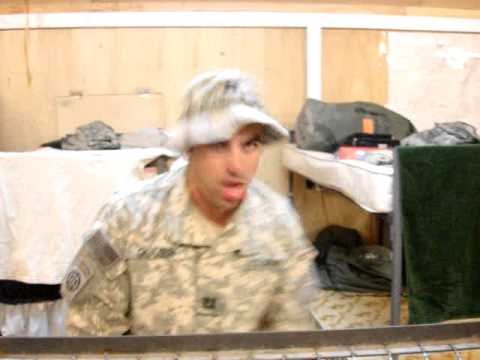 Regardless of negative side-effects and binge-drinking the stuff, neither Riker, Daniel, or Eifling have ever heard of the military putting official restrictions or limits on Rip It -- and according to all three, its influence and usage is still pervasive despite a hoax that went viral last year in military circles claiming the US military had cut off sales of all energy drinks.

Rip It keeps morale up -- it's a comfort that reminds our soldiers of home, and some level of normalcy. When not overused, it's just as "bad" as a cup of coffee.

"The main health risk my guys had was getting shot or being blown up by bombs. So being attentive and alert is really the most important thing. Falling asleep is the best way to die and to get people hurt," said Eifling. "Vigilance can be the best medicine in some cases. And stimulants were a big part of that -- not just culturally, but as a way to get things done."

"That was kind of the thing with Rip Its," Riker said, his voice breaking with just a note of sentimentality. "They kept people going. And I guess that's what they were there for."

Wil Fulton is a staff writer for Thrillist. He is not in the military, but would like to be some day. Follow him @wilfulton.