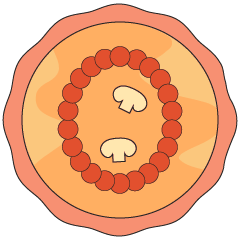 Our pizza scene gets a bad rap -- unjustly so. No, we’re not New York, but we’re not Los Angeles, either (aka the ninth circle of pizzeria hell, no matter what this guide says; trust us, we’ve sampled the wares). In fact, these days, we Bostonians should be downright boastful about our pie scene. Between the stalwarts and the newbies, we could subsist for weeks on dough, sauce, and cheese alone. But where to get the best pizza within a hungry, lazy stroll from your home? To answer that question, we sussed out 18 of the greatest pie-slinging spots around town and broke them down by precinct.

Est. 2019 | Fenway/Kenmore
Food hall pizza well worth forgoing the other temptations
Food halls now dominate our gastronomical headlines, with the Time Out Market leading the way. The temptations here are deep and wide, but a special visit must be made for Michael Schlow’s first foray into pizza. These are wood-fired pies done Roman-style, which means a sturdy yet airy crust  that still maintains plenty of crisp. Topping options include Tuscan kale and artichoke, but we think the Marguerita best lets Schlow’s talents shine through.
Runner-up:Blaze

Est. 2014 | Fort Point
Rustic Neapolitan sit-down true to its name
The wood-fired Neapolitan pies maintain a devoted fandom, partly owing to chef-owner Todd Winer’s homemade cheeses, as well as toppings like fennel sausage, veal meatballs, and fernet-honey. The chic, industrial-farmhouse decor, friendly vibe, and European wine list all mean you can have your date night and eat pizza, too. Insider’s tip: the full pizza menu is also available at brunch, when you’re invited to throw an egg on the pie of your choice.
Runner-up: Nebo

Est. 2015 | Charlestown
Industrial-designed hipster enclave with outdoor seating
A few years back, Charlestown had been so hungry for a decent new restaurant that Brewer’s Fork could have served deep-fried cobblestones and been a hit. Luckily, this gastropub aimed much higher, nowhere more visibly than with its pizza menu. The thin, chewy-yet-crackly crusts serve as base to wonderful topping combos like chopped pork and applesauce, and bacon and potatoes.
Runner-up:Figs

Est. 1933 | East Boston
No-frills pizza lunch counter with BBQ options
This is when you forego both niceties and toppings and silently snarf the best cheese pizza in town. The gas and toll money is more than worth spending to reach this centenarian mainstay, which started as an Eastie bakery in 1903 and serves barbecued lamb and steak skewers in addition to pizza. Bonus points go to the inimitable people-watching and the five-dollar glasses of wine. Just remember: cash only (although things are a bit more modernized at the second Peabody outpost).
Runner-up: Hands down winner

Est. 2010 | Davis Square
Airy, spacious Italian spot great for large parties
Authentic Neapolitan pies are few and far between, which makes these flash-baked beauts all the more desirable. Imported pizzeria flour and Italian tomatoes combined with meat-centric toppings (fennel-roasted pork, prosciutto, lamb sausage) and house-made mozzarella make for a grand meal, indeed. Oh, and we have a tailgating tip for you: book their mobile wood-burning oven for your next Sunday spread, and you’ll forever be a hero to your friends and family.
Runner-up: Mortadella Head

Est. 2018 | Coolidge Corner
Sleek but unpretentious spot focused on wood-fired comfort fare
Lineage closed, and we mourned the loss of that wonderful oven, but then Prairie Fire took its place and fired it up again, this time focused on crispy, slightly charred pies. Toppings are straightforward rather than fanciful; think fennel sausage, charred Tuscan kale, mushrooms, and white anchovies. For late nights when you crave a wood-fired slice, the pizza menu is available until 11 during the week and until midnight on weekends.
Runner-up: Oath Craft

Est. 2012 | South Boston
Reasonably priced, huge space with appropriately huge toppings
Man, do people love these wood-fired pizzas. Like, love love. It might be the leopard-print crusts, or the generosity of the toppings (those pepperonis are huge). But most likely it owes to chef Nick Dixon’s unusual expertise -- he consulted with a “pizza guru,” splurged on a gourmet oven, and tested numerous flours before developing his own dough recipe. The breakfast pizza is also worth a daytime return trip.
Runner-up:Capo

Est. 2011 | Newton Corner
Casual sit-down dominated by its coal-fired oven
A century ago, most NYC pies were coal-fired. Max and Leo’s has helped revive the technique, which results in pizza that cooks in just two minutes, charring the outside of the crust but keeping the dough moist and chewy inside. Build your own pie or opt for an artisan pizza like the Blue Ribbon (BBQ glaze, pulled pork, caramelized onions, mozzarella, and smoked gouda, topped with BBQ sauce). There are also outposts in Sudbury and  inside Game on Fenway, but we like the original haunt for its friendly and authentic vibe.
Runner-up:Newton Corner House of Pizza

Est. 2011 | Kendall Square
Obsessively crafted pies in and industrial-chic restaurant and cafe
There’s a reason Obama stopped by back in 2015. The pizzas here are treated like royalty: the dough fermented for more than 30 hours, the mozzarella hand-pulled, the pies positioned in the wood-fire oven just so in order to guarantee a buoyant, charred crust. You’ll swear allegiance to the sausage and banana pepper pie before tasting the clam and bacon varietal and landing on a new favorite. Luckily the restaurant offers both small and large pies to allow for more taste-testing  -- as well as a second location in the South End.
Runner-up: Za Cambridge

Est. 1974 | North End
Hole-in-the-wall with rabid, hungry cult following
The pizza’s only there until the dough runs out (usually by 2pm), so best to get there before noon. Decisions are easy: You're getting two slices of Sicilian deliciousness, and maybe some arancini if you really feel like getting after it. It routinely wins national accolades for a reason.
Runner-up: Regina Pizzeria

Est. 2012 | Inman Square
Small, corner pizzeria with a welcoming, nerdy vibe
The dudes behind Inman’s All Star Sandwich Bar have cemented their MVP status. Want meatloaf and red onion jam on your pizza? There’s a pie for that (Atomic Meatloaf Meltdown). Pulled pork and mango? There’s a pie for that too (El Hefe). All Star's vegan and vegetarian options also come highly recommended -- the almond milk bechamel is a revelation -- and the guys behind the counter are Star Wars nerds, to boot.
Runner-up:Pizza Pie-er

Est. 2004 | South End
Family-friendly, informal, and also serves homemade ice cream
Before you whine "my crust is charred!" -- it’s on purpose, and it’s fabulous. The wood-fired gourmet pies come out incredibly hot (what’s the heat index level above "piping"?) and include chichi toppings like creme fraiche and Gruyère cheese. Since there will be approximately no leftovers, depart with a pint of the equally revered homemade ice cream.
Runner-up:Coppa

Est. 2016 | Harvard Square
Swanky, special-occasion spot with great seafood
Quality pizza in Harvard Square was a surprisingly tall order ... until Waypoint came along. How can it be that a glamorous seafood restaurant has the area’s best pizza? We don’t ask questions; we just eat. Every topping combo is a revelation. (Chopped clams, parsley, peperoncino, pecorino? Totally works. But you’re here for the smoked whitefish pie, one of the most celebrated dishes in the city. It’s a bagel sandwich translated to pizza form: whitefish, mascarpone, dill, and capers with a seeded crust, and it works just as well as dinner as it does at brunch the next day.
Runner-up:Pinocchio’s

Est. 1971 | Huron Village
Bare-bones, NYC-style pizzeria with a family legacy
Transplanted New Yorkers missing the mothership, this is where to head. It’s a classic, old-school, family-owned Sicilian joint, complete with Formica booths, tossed pizza dough, and Fanta in the fridge. The blunt counter service doesn’t hurt either, though it’s all an act. Those who spent their childhoods frequenting the place probably still remember founder Armando Paola and his propensity for doling out cookies and letting kids behind the counter roll out some dough (RIP -- wonderful man).
Runner-up: No competition

Est. 2007 | Beacon Hill
Flashy hotel dining room worth the money
So, you need to make a first-date impression, but you're seriously jonesing for some pizza. Or your parents are in town to foot the bill, but you’re seriously jonesing for some pizza. Or you have 28 bucks burning a hole in your pocket, and you want to blow it all on some pizza. The solution to all that ails: Scampo’s lobster pizza. Lydia Shire’s signature dish is set at max decadence, with heavy cream, caramelized shallots, and the meat of a two-pound lobster. The other pies, from artichoke and prosciutto to white clam and bacon, ain’t too shabby either.
Runner-up:Figs

Est 1962 | Cleveland Circle
The award-winning pizza equivalent of a late-night greasy spoon
After you’ve gotten completely sauced at the bars, head for a sauce-and-cheese palliative at this late-night go-to. The booze-absorbing slices drip with flavor, grease, and next-morning regret. Order extra sauce on the side for dipping.
Runner-up: The Real Deal

Est. 2011 | Back Bay
A graffiti-walled enclave that appreciates fine meats
With a name like The Salty Pig, you know that meat toppings are the order of the day: prosciutto, homemade pork sausage, and all other manner of salty, mouthwatering charcuteries. But seasonal veggies are given equal attention, and the dough itself is a labor of love, the recipe often tweaked to maximize the crust’s balance of char and bounce.
Runner-up:Dirty Water Dough

Est. 2014 | Wherever it may roam
Lauded food truck with new brick-and-mortar outlet
If you were wondering whatever happened to Letters to Cleo bassist Scott Riebling, we’ve got news for you: He turned a lifetime pizza obsession into a right-turn career change and launched his own food truck. Those individual pies quickly became the stuff of takeaway legend, a tri-hybrid of New York-, New Haven-, and Neapolitan-style, coal-cooked for three minutes in a 6,000-pound oven. Meat eaters might go to the veggie dark side after sampling the Buffalo Brussels sprout variety, though vegan substitutions also abound. Although there’s now a brick-and-mortar version of the truck, we’ll stick with the original four-wheeler.
Runner-up: Sweet Tomatoes

Sign up here for our daily Boston email and be the first to get all the food/drink/fun the Hub has to offer.