Why Detroit Deep Dish Is Superior to Chicago's in Every Way

Growing up, Detroiters understand only one meaning behind the phrase "deep dish pizza."

That meaning: dense squares with a buttery crust crisped up to a deep golden brown around the edges, yet chewy on the inside, along with a delicately spiced tomato sauce that couldn't be confused with marinara even on its worst day. Then there are the gobs of gooey cheese that stretch with each bite until you pinch it between your fingers and pop that wad of molten mozzarella in your mouth, and the crispy pepperoni, every-so-slightly burnt around the edges, adding an extra textural crunch, as pepperoni grease pools up in the bowl-like center, collecting like supplications to a deity.

There are other kinds of pizzas, and we are aware of them -- moderately enjoy them even. But none of them are our pizza, the REAL deep dish pizza. On the page, it looks like nothing. The description simple, almost comic. But this is not "just a pizza." That first bite -- how blissful that first bite is. The crust gently cradling the bubbling browned cheese. And then the pepperoni, the slice of green pepper, the hint of chopped garlic, and the light tomato sauce... all so intense, and melded so beautifully, as if made by the hands of God.

THAT is the deep dish pizza Detroiters know. Fighting over the last corner piece was a universal childhood experience (until Jet's finally got wise and introduced the eight-corner pizza, which is really just two small square pizzas in one big box, which is perfectly fine). This, and this alone, comprised our understanding of "deep dish."

Until, at some point in every Detroiters' life, perhaps in his or her teenage years, maybe not until college or later, he or she visits Chicago for the first time, and learns the devastating life lesson that "deep dish pizza" does not mean the same thing to all people. 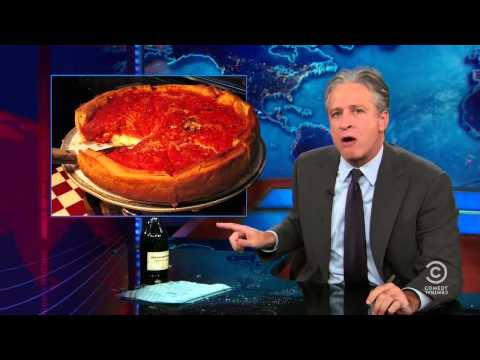 Jon Stewart, beacon of American sensibility that he is, once said simply of Chicago deep dish pizza: "It's not pizza." In his epic rant on Chicago's signature marinara pools encased in a fortress of dried-out pie crust he also observed, "It's a f***ing casserole... You know the expression, there's no such thing as bad sex or bad pizza? Your pizza is like sex with a corpse made of sandpaper."

It was glorious. It was everything pizza lovers -- REAL pizza lovers, lovers of things that can legitimately, legally be referred to as "pizza," with actual "toppings" instead of fetid pools of lukewarm marinara drowning flaccid slices of wet pepperoni and rubbery cheese robbed of the opportunity to bubble and brown -- have been feeling in their hearts for years.

The "Chicago pizza" experience for your average visitor typically starts with standing in line for two hours at Giordano's or Lou Malnati's or Pizzeria Uno, only to be told it's going to be another hour before your pizza is ready because the 8in pie crust takes that long to bake, and BY GOD they cannot take any chances of it not being so dry it puts you in serious danger of choking on each and every bite. Then it arrives and you discover, to borrow from Mr. Stewart once more, "THIS IS NOT PIZZA. THIS IS TOMATO SOUP IN A BREAD BOWL," and that you just wasted three hours and $45.

Now you're stuck carrying an 11lb box of leftovers around Chicago because you just can't justify throwing it out yet, even though you KNOW that is exactly what's going to happen -- you're just going to stick it in your hotel room's mini-fridge and conveniently "forget" about it later.

Chicago's abomination is most accurately termed a "stuffed pizza." Because to call this atrocity, this marinara pot pie nightmare "deep dish" is an insult to all other deep dish pizzas in the world, especially Detroit-style deep dish -- or, as we know it, simply "deep dish," the absolute superior, most exalted and sacred of all deep dishes.

Do you know what kind of crust you get with Detroit-style deep dish? Instead of a crust-colored concrete disaster, you get dense squares of twice-baked pillowy crust beds nestling bubbly cheese and crispy pepperoni, baked in oil-soaked pans and sometimes even brushed with melted butter to ensure that the crust is chewy and soft on the inside, but golden and crunchy on the outside, caramelized around the edges where the bubbling mozzarella has browned and fused with the butter-soaked crust in a blessed and righteous union, then sprinkled with parmesan cheese just to prove that there is no such thing as too much of a good thing.

Your so-called "pizza" is atrocious. You know it, and more importantly, WE know it.

"But Detroit deep dish has the marinara on top too." Well look at you, Mr. Wikipedia! Yes, it does -- sometimes. And even when the sauce IS on top, it isn't there to drown the rest of the pizza, encased in foot-high crust barricades and suffocating the cheese and all of the other toppings, not allowing them to see daylight until the whole thing explodes like a dead sperm whale when you cut into it. It's there as an accent, part of the holistic harmony of the Detroit deep dish pizza taken in its entirety, each part playing an integral role in the symphonic composition of the finished product. For what is an orchestra if the percussion drowns out the strings? It's a goddamn Chicago stuffed pizza, is what it is.

This isn't over, Chicago. Your so-called "pizza" is atrocious. You know it, and more importantly, WE know it. We will suffer the tyranny of your "stuffed" pizzas no more. With Little Caesars rolling out its Detroit-style DEEP!DEEP! Dish Pizza to its eight thousand franchises across the nation last year, the days of "deep dish pizza" being synonymous with that revolting Chicago monstrosity are over. Detroit deep dish will rise to its rightful place of dominance in the American pizza hierarchy, like Daenerys Targaryen with her army of Unsullied to suffer your ill-gotten incestuous claim to the throne no longer.

Sign up here for our daily Detroit email and be the first to get all the food/drink/fun Motor City has to offer.