The Best Pizza Joints in Indianapolis 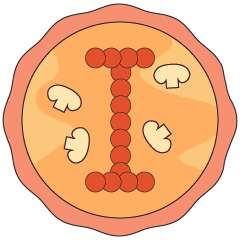 Indianapolis is the capital city in a state known as “The Crossroads of America,” a phrase that implies interstate dining and sad slices sitting in a gas-station warmer. But once you get off the highway and into the 465 loop, the flavor remix potential of such a crossroads is fully realized in the form of pizza. Here you can find everything from Thai shrimp to farm-fresh quail eggs on our pies, and Indy is not a town afraid to experiment on one saucy, cheesy triangle at a time. It’s like San Francisco in the '60s, but with a lot more ranch on the side. Here are the best pizzerias in town.

A relaxed spot for sports or to cap off a long day's work downtown
You might be fooled into thinking that Downtown has no late-night pizza options, and you would be wrong. Tucked back on the eponymous street, Pearl Street Pizzeria is open until 3am and serves incredible edge-to-edge pizzas, and it's equipped with TVs, making it a great place to watch a few games while you eat. They’ve got plenty of taps devoted to local craft beer, if you’re looking for a quick after-work drink and bite.

The best chain you can order from anywhere in town
When something’s good, it takes off, and there’s no better proof of that than the explosion of Greek’s in Indy. Imagine the rich, slightly sweet sauce on top of a bubbly, bready bottom that ends on the edges in a pillowy ring of perfect crust. Greek’s is sprouting up in just about every neighborhood, and has finally returned to the Broad Ripple area so Midtowners can get their cravings satisfied like our Northern neighbors. If you were thinking about ordering from a certain Papa and there’s a Greek’s in your neighborhood, make that life-changing switch on your next order. You’ll never go back.

Indy's best pizzeria for Phish phans
Part of the Patachou family of restaurants, Napolese serves farm-to-table food on a seasonally-updated Italian menu. Its Napolese Broken Yolk is an undisputed Indianapolis favorite: a margherita pizza with a quail egg on top. Aside from the artisanal selection, this spot offers some "freestyle" options, which gives diners a choice of up to three toppings per pizza. Phish fans will get a special kick out of some of the pie names, as Chef Tyler Herald is both a flavor wizard and a jam band devotee.

The beloved, well-known gold standard around Naptown
Parents love it, kids can't get enough of it, and politicians get pictures taken while eating it to prove they understand what’s good around here. This place offers the perfectly thick crust, with a crunchy, buttery edge, and a good balance of toppings. The pizza menu is divided into sections: meat, cheese, and potato; chicken; veggie; seafood; and "hangover pizzas" (translation: pies with a lot of stuff thrown on to make you forget about how much you drank the night before). Here’s the best part: it’s next door to Black Acre Brewery, so you can get your flights of beer at the pub and wolf down a slice after you’ve done your best work on a few pints.

Great for large groups and craft beer options
For those with a taste for the gigantic and exotic, there is Bazbeaux, named after Louis XI's famous court jester. Stop by and get a pie piled with veggies, or seafood, or andouille sausage and have a banana bread beer to go with it. It’s ideal for when you need to feed a group of people with a variety of tastes. Alongside the pizza, make sure you get a salad, if only to try the basil dressing that comes with it. And though we love all of our Bazbeaux’s equally, the Broad Ripple location must bake at a hotter temperature because it definitely makes the better crust of the two. It has gluten-free and vegan options.

A cozy dining room with excellent craft pizza and cocktails
Pizzology continues to see lines out the door on weekends while Carmelites wait for that special paper-thin, ultra-crunchy crust that comes out of the oven at this place. Pizzology is a place where you can bring the kids and get them the pep-extra-cheese they like and also get something more grown up for yourself. For our money, the mushroom-heavy White Devil (prosciutto, mushrooms, house-made mozzarella, olive oil, garlic fondue, and sea salt) is the hands down best pick.

A romantic setting, with wood-fired slices to fall for
Diavola has been one of the contenders for king of the wood-fired slice since it took over the old Twist Lounge spot on 54th and immediately made waves with the crusty, chewy version of the brick-oven pizza. The warmly-lit, dark interior makes it another good choice for a date with someone you like enough to share a pizza with. (No judgment if that is no one.)

An obsession with NYC taken to the (best) extreme
This place has been around for a while, and for good reason. It started humbly on Emerson and now has two more locations, one on the beach in Florida and the other in Nashville, Indiana. Don’t be put off by the New York Everything vibe of the place, because the pie really is good (whether it be the Broadway, the Park Avenue, the Canal Street, or the Brooklyn-Queens Expressway). Be sure to get your pizza done “Grandma Style." The extra-thick crust is like stepping into the kitchen of the Sicilian grandmother you never had. It's something you should try at least once.

Your first stop for Chicago-style deep dish
Some locals may angrily call it “pizza casserole,” but our neighbors from Da Region would probably say that South of Chicago has the best deep dish, well, south of Chicago. If you really want to go Chi-city crazy, you get get your deep dish topped with Italian beef and giardiniera peppers. And who are we to judge?

A UK pub great for two things: soccer and pizza
It’s not often that UK-centric soccer bars are the place to find great pizza, but Union Jack makes exactly the kind of thick-crusted, topping-laden pie you need to fuel up for proper hooliganism. It also offers something called the Jack Stuffed Pizza Pie: an incredible butter crust and cheese mashup that looks pretty much identical to a pie with the top crust vented for the oven. Do try!

This is the spot to order outside the box
We don’t often recommend trying anything but a standard pie when venturing to a new pizza joint, but this place does exceptional things with its “unusual” variety of pizza. Get yourself a Thai pie with carrots, cashews, and peanut sauce and realize that maybe -- just maybe -- you’ve been doing your Asian fusion food all wrong.

Where inventive jazz, cheese, and joy collide
Just around the corner from the Jazz Kitchen is this funky little pizza shop serving pies until the music stops at midnight on the weekends (and 10pm Sunday-Thursday). Folks in the neighborhood have been buying the delicious thin-crust pies for a long time, and there’s no need to mess with perfection -- especially when you're offering a 16-inch five-cheese and tomato pie for under $20.

The food-truck favorite offers even more options at its restaurant
For a while, visitors of the Broad Ripple Farmers Market have been enjoying Byrne’s limited variety of pizza by the slice. Now, everyone can indulge in a pie with this brick-and-mortar location at 56th and Illinois in the old Oh Yumm! Bistro storefront. The restaurant offers a few lunch selections on top of the "Always" served pies (approximately 15), all of which come in both small and large. But c'mon, if you've tasted the product at the Farmers Market, chances are you'll be ordering up the large.

A welcoming hall of drink, sport, and specialty pies
All hail the great Ale Emporium: palace of beer both micro- and macro-brewed, and great pizza wonder of the Northside. Amid chains and crappy sports bars, the ever-wonderful Ale Emporium supplies both the best pizza and the best wings in Castleton in a kind of glittering museum of televisions constantly playing sports. Between the draft and bottle list, you can get about a thousand different beers to wash down the game-day food. It’s hard to think of a better place to spend a few Sundays during football season.

Sign up here for our daily Indianapolis email and be the first to get all the food/drink/fun in town.


Sarah Murrell is a Thrillist contributor, writes her own blog at The Sensualist, and, for better or worse, compiled this list based on a lot of really tough first-hand research. You can check the authenticity of her methods by following her on Twitter.