Did You Know Miami Has Great Pizza? Here's Where to Find It. 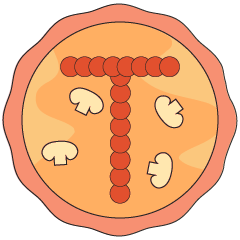 The hard truth is pizza was a lot simpler when you were young. As a kid, seeing the Domino’s guy at the door was the next best thing to seeing Santa Claus, and Totino's party pizzas really meant a party. In college, you ordered Hungry Howie’s or Five Star and tried not to pass out before the delivery guy got there.

Now? Now you’ve got wood-fired pizza, Neapolitan pizza, New York-style pizza, and even vegan pizza to choose from. Though the overwhelming number of options can sometimes make you wish for simpler times, we’re here to guide you with our selection for the best pizzas in Miami.

The perfect place for a cheap date or group dinner
Like a cocaine smuggler's boat in the 1980s, the wave of great dining options is slowly making its way down the Miami River, and the folks behind Crust were way ahead of it. The husband and wife team who run one of Miami’s best restaurants are not only making homemade Italian-style pies, like ones with sirloin tips, mushrooms, and caramelized onions, but they're doing it for actually-reasonable prices, AND delivering to Downtown and Brickell, where these kinds of pies would normally cost 30% more.

The locals’ legend that’s still as good as anywhere
Wood-burning pizza ovens are great. Brick-oven pizza? Fantastic. But you need exactly none of that to last decades in South Florida, especially when you’re as much a part of the local food culture as Cuban sandwiches and stone crabs. What you do need, however, is a classic New York-style crust and fresh ingredients, plus reliable, friendly service for decades. Steve's is such a Miami institution that it is THE spot Dade lifers talk about when the subject of best pizza comes up. That, and eating challenges.

The Beach’s best slices, fresh baked to order
Never heard of it? That's a damn shame, and that also means you didn't read our groundbreaking ranking of all 16 slice spots in South Beach. Block's was rated No. 1, mostly because they use all-organic ingredients atop fresh-made whole wheat sourdough crust, with a rich marinara, fresh basil, and grated mozzarella, and leave it unbaked until you order, which means it's the rare SoBe slice that hasn't been sitting out since lunch... and actually tastes like fresh pizza.

The best slices South of Fifth
Even though it's got a monopoly on the SoFi slice market -- and could probably have lines out the door by cooking up a bunch of Totino's -- the crew behind this staple takes pride in their product, and serves not only the best slice south of Fifth, but quite possibly the best slice in the city.

Slices the size of your head, with equally gigantic flavor
In the "pizza slice the size of your head" wars, Miami's battle has long been won by Casola's. And while it's definitely a place to put on your Miami food bucket list, the best mega-slice in the city is actually at Pizza Bar, where the greasy, gooey, garlicky goodness of this giant slice tastes just as delicious for lunch on a Monday as it does for a very late 5am dinner on a Saturday.

Romantic date spot with 22-inches of basil-covered perfection
Unlike every guy you see at the front of a club line, Lucali actually IS a big deal in New York, and Miamians actually care. Mark Iacono's Brooklyn pizza palace landed in Sunset Harbour a few years ago and has topped many a local's best pizza lists, with its massive 22in pies, fresh-made mozzarella, and an entire basil plant on every pie. Yeah, the pizza costs a little more than one might expect, but for a restaurant meal in Miami, it's still one hell of a deal.

The most authentic Neapolitan pizza in the city
In less time than it takes to wait for a light to change on SW 8th St. in Brickell, you can run into this all-imported Neapolitan pie shop and watch your pizza get cooked in a blistering 57 seconds. The wood-burning over pies have become a local legend, and spawned not only a line of pretty solid sandwiches (the meatball and mozzarella tastes especially good after a long night out) but also a fast-casual offshoot at the Citadel food hall called Ash! Pizza Parlor.

Untraditional pizza that tastes like something you'd find way outside of Miami
Because nobody should have to give up the decadent indulgences of pizza when they give up animal products, Mora Pizza is bringing Miami all the wonderful creations of traditional pies without using traditional cheese. Also on the meat-free menu is a cheeseburger pizza made with vegan ground beef, crab rangoon pizza, Buffalo chicken, barbecue chicken, and pretty much anything else you’d expect to find at one of the city’s best pizza shops.

As close to Italy as you’re getting on West Avenue
If your Italian’s a little rusty, this place's name means “Master of the Pizza.” Ask any Italian, and he’ll tell you this guy’s the real deal. In addition to specialty Neapolitan pies, he's serving up this star-shaped pie with triangular pockets of ricotta, mozz, pepperoni & tomato sauce.

D-Wade and UD slinging caviar pizza
The key in business is knowing your audience. And this LA transplant clearly consulted with local investors Dwyane Wade and Udonis Haslem when crafting the menu, offering up a wood-fired, Iberico ham and caviar pizza that’s the definition of South Florida excess. They also obviously consulted with locals in Aventura, as the menu also offers a salmon pastrami pizza with a garlic-and-caraway crust, essentially a bagel and lox on a pizza.

An old tire store now plating the best creative pizzas in Miami
This Biscayne corridor pioneer has a huge range of specialty combos, from pesto chicken to Tuscan tuna, to the seven-veggie ratatouille. And though the neighborhood around it has sprung up dozens of new restaurants since Andiamo paved the way 18 years ago, it’s still the top dining destination in MiMo.

Great pizza and reasonably priced wine make for a perfect Kendall date night
The folks behind Graziano’s weren’t content to just sling Argentine steaks and Italian food for the rest of their lives. And who would be? So they took this spot in an unassuming strip mall on Sunset Drive and turned it into a charming Italian restaurant. Here you’ll sit down and order pizza made with fresh-from-Italy ingredients before scanning the walls around you for the perfect bottle of Italian wine, most of which is priced at about half what it is in normal restaurants.

Brooklyn-style pizzas for one
There may be no "I" in team, but there are two in "Miami," which sums up the denizens of our city pretty damn well. And the guys behind Apizza get it. Not only do they serve up crispy pizzas out of wood-burning ovens, they do them all in individual sizes. Which means no sharing, no compromising, and no having to consider anybody else, ever. If that doesn't scream Miami, nothing does.

A BYOB gem tucked away in an unexpected location
If you haven’t spent time in Little River -- the little artsy enclave of between Little Haiti and MiMo -- Ironside Pizza is your perfect excuse. Here you can relax outside (with your own wine) and enjoy wood-fired Neapolitan pizza topped with fresh, imported meats and Italian cheese. Your go-to to enjoy in the courtyard is the Regina with cherry tomato, arugula, parmigiano, prosciutto crudo, and mozzarella.

Miami’s best pizza that’s not at a pizza place
A lot of restaurants with eclectic menus will throw pizza in as an afterthought. But not The Brick. Though this self-style American Bistro isn’t a pizza place per se, their pies can hold their own with anyone making New York-style pies. The dough is made fresh daily in-house, and when topped with locally-sourced meats and veggies they make for the most pleasantly surprising pizzas in the city. Authentic it’s not, so order the spicy chicken, made with buffalo sauce, mozzarella, and ranch. It might sound a little weird, but it’s absolutely worth a try.

Food court pizza that blows the roof off of classic NY joint Sbarro’s
Miami may now have more food halls than insured drivers, but perhaps the best pizza to hit any of them is the one at La Centrale, a meal-sized, wood-fired Italian creation that’s enough to eat for a quick lunch and not immediately fall into a food coma. Though if you do feel like sleeping through the last four hours of the workday, it's best enjoyed at La Centrale’s central bar with a nice glass of wine.

A Neapolitan tavern with smoky pizza and insane dessert
This place feels more like a rustic tavern in Napoli than a big, giant-windowed pizzeria in the heart of Buena Vista. The walls are done up to look like old-world wood, with little wooden chairs and tables and Italian sports on TV. The pizza is straight-up Neapolitan, where red cedar wood burns in the oven, giving every pie a vaguely smoky flavor. But make sure to save room for dessert: The strawberry tiramisu is so good you’ll eat it even when your stomach says no more.

Curt Hollingsworth is a Miami native who spends his time enjoying the city, the sand, the Keys, and any bar that claims they have the best margarita in town.