Pizza Toppings Are Dumb And They're Ruining Your Pizza

Cole Saladino/Thrillist
Editor's Note: The strong opinions expressed in this story do not necessarily reflect the opinion of Thrillist. It is merely the author's stance, though having read this disclaimer, it is also now your stance, legally speaking. Kidding! You are now within your right to (politely) question the author's sanity.

There's an unmistakable stigma attached to being a fully realized, grown-ass adult who prefers cheese pizza. Stating such a preference makes much of the pizza-consuming public think you're an unrefined rube with the palate of a small child.

That's a damn shame, because toppings are the single most overrated element of the pizza equation, and a perfect slice of cheese pizza is a beautiful testament to the virtues of simple restraint.

Let me be clear that this has nothing to do with pickiness. I am a fan of pretty much all your standard (and even non-standard!) pizza toppings. Sausage? I'm part German AND part Polish. Pepperoni? Pass me one of those little bags by the Boboli crusts in the grocery store and see what happens. Hell, I even enjoy anchovies, the obligatory topping of choice of the weird, annoying fringe character in mediocre sitcoms everywhere.

I say all of this not as some oddly specific form of bragging, but to establish that it comes not from a place of aversion to certain ingredients when I state, plainly (!), that cheese pizza is the best pizza.

And I know I'm not alone. I know there are more of you out there who've experienced those pointed looks during group pizza orders that say "plain cheese, what are you, a kindergartener?” I know there are others who've felt the twinge of guilt after accidentally taking too many slices of cheese at a family gathering, because said cheese pizzas were earmarked for attendees under 10. I know I can't be the only one who relishes ordering a pie for home delivery when no one else is around and hears Macaulay Culkin's voice in his head as he starts eating.

"A lovely cheese pizza, just for me." 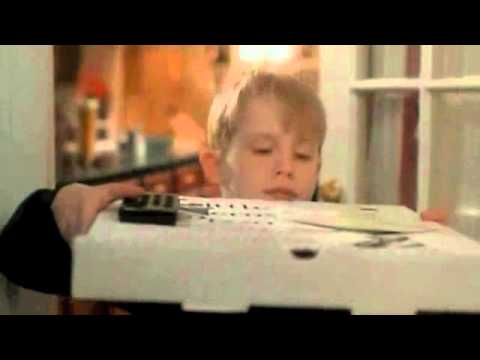 Because you know what? Regular-ass, unadorned, zero-specifications cheese pizza IS lovely. It's high time we, the enlightened, reclaimed the good name of cheese pizza, not as the last resort of the excessively finicky and the unimaginative, but as a true work of art. A cheese pizza is pizza distilled to its essence, a centuries-old culinary art expressed in its purest form. End of argument.

The "how can we top ourselves next" food culture we live in (of which my place of employ is certainly guilty of perpetuating on occasion) fuels a "more is better" mentality when some things are just best left the fuck alone. Milkshakes are glorious just the way they are. The world did not need "freakshakes."

But even a more conventional, sparsely topped pie is still distracting from its essence. There's something to be said for a simply seasoned steak free of any distracting bearnaise, or (arches eyebrows) A1, or (stares disapprovingly) ketchup. If you only enjoy scallops that have been wrapped in bacon, you don't really appreciate scallops. Similarly, there's a flavor epiphany that the trinity of crust, sauce, and cheese can only deliver if unobstructed by clumsy interlopers to the party.

While we're talking about those interlopers, topping quality and value vary wildly depending on the establishment in question. Sometimes they're perfectly respectable. Tasty, even! Other times you paid $3 for the honor of having some disinterested high school kid sprinkle your pizza with rubbery, fragmented "mushrooms" that look like they should be cleaned up with a Dustbuster rather than consumed intentionally by humans.

Also, every time you order one of those "garbage" pizzas where the cheese is overwhelmed by a haphazard avalanche of toppings that don't even really belong together or every goddamn animal product on the menu, somewhere an Italian nonna cries.

There's a flavor epiphany that the trinity of crust, sauce, and cheese can only deliver if unobstructed by clumsy interlopers to the party.

Speaking of Italians, while the specifics of pizza history are complex and oft-debated, it's generally accepted that Naples is the birthplace of what we in the modern world know as "pizza," and that there were two critical milestones in said development. The first was when tomatoes were invited to the party (pizza marinara) and the second was when cheese made it a three-way (pizza margherita*). There are still pizza purists who believe pretty much everything that's happened since was unnecessary.

*Yes, I realize there's also basil involved in a pizza margherita, but I'd argue that's just a minor fresh herb accent rather than a full-on topping, but whatever, most of us don't even live in Naples, OK?!

I understand this might seem like I'm another internet food person telling you how to enjoy YOUR food. I assure you that's not my intention. I respect your right to prefer pepperoni pizza. I even respect your right to order some chicken bacon BBQ ranchburger abomination that, as we speak, is making my sweet nonagenarian nonna-in-law sob the tears of 1,000 guilty Judge Judy defendants. (She likes that show.)

I'm just pleading with you, next time you're in a big crowd ordering pizza, and you see a meek cheese-preferring acquaintance get shouted down by the aggressive pro-topping crowd, maybe change things up and offer to join them. Maybe you'll be surprised by how little you miss all those unnecessary extras. Maybe you and your appreciative friend will lock eyes knowingly when you each take that first bite of unspoiled, cheesy, saucy, crusty perfection and think to yourselves:

"A lovely cheese pizza. Just for us."

Deputy Features Editor Matt Lynch consumed several slices of pizza while writing this article. Argue with him about all things pizza @MlynchChi.