The Tailgating Games You Should Actually Be Playing

I'm a staunch believer that every gathering centered around the pretense of consuming food and alcohol is only made stronger by the inclusion of low-stakes competition. Not only do games help bolster community bonding, challenge our sense of self, and push people to pursue excellence… they also create an activity buffer that makes sure we don't have to make awkward small talk with strangers (and friends).

Every party worth its weight in celebratory hats needs games to truly thrive, and since tailgates are basically pre-game parties -- that often overshadow the actual main event -- it only makes sense to make sure you have some type of competition, ready-made for parking lots.

Presented here are eight options for tailgaters of every skill level, from "This is my first time at a football game and I'm really only here for the hot dogs" to "Buffalo Bills fan." Also, just to be clear: It's totally cool to play any of these games, and not drink; for the ones where drinking liquid is essential, swap in Coconut LaCroix.

Two teams of two (ideally) attempt to toss bags atop, or into, a plank of wood with a hole in it, and hopefully not suck. Sometimes called "bags," depending on the region.

Pros: Almost everyone knows how to play, almost everyone can play, and it's a very low-energy, well-paced game, ideal to play with beer in hand.

Cons: You need to have the boards, the bag, and at least four participating people -- plus, the boards can be a little cumbersome and/or expensive. Some players also tend to take cornhole very seriously, so often it's not as fun as it would seem to be. And kids definitely gravitate to the board: You'll find yourself in situations where eight 5 year olds are slam-dunking bags and you need to pry their moms away from the margarita pitcher to get a real game in. And if you've ever pried four middle-aged white moms away from a margarita pitcher while their children's attention is steadily occupied elsewhere, you know this is no easy ask.

Pros: If you can play, it's very, very, very fun and a great alternative to the "basic" trappings of bag toss. It requires a slight learning curve, but has a lot more consistent action than most of these other games. It's also another option for those who want a drink-while-playing game, and not a drinking game.

Cons: Like cornhole before it, you need equipment (the two cans and a frisbee) in order to play -- and, in this case, there's really no way to make your own set. You also need a little bit of space to play this game properly, and it does require a certain amount of predetermined skill (throwing a frisbee), and moderate physical exertion if you are truly committed to winning.

Traditionally, two teams of two attempt to toss a pingpong ball in every one of their opponents' cups (usually six, arranged in a triangle) before they do the same, in turns. But there are many, many variations here.

Pros: I mean, it may be the most classic of all the drinking games (aside from "chug the beer"). It has a fairly small learning curve, requires almost no movement, and is also a great way to consume multiple drinks in a short period of time, which -- depending on the tailgate -- might be exactly what you are looking for.

Cons: Well, you need a pretty big table (or, an actual tailgate) -- because the whole "let's stand really far back on a small table" method just isn't the same game. You also need pingpong balls.... and those pingpong balls tend to get lost under cars when you play in a parking lot scenario. Also, beer pong tends to bring out a certain, fratastic style of douche-baggery out in even the most mild-mannered individuals. Play with caution, folks.

You cut the knob end off a regulation yellow Wiffle Ball bat, fill it with beer, chug the beer/bat, spin around for a determinate time (add one turn for every second it took you to chug the beer), then attempt to hit an empty beer can like a baseball once you finish. It's hard. 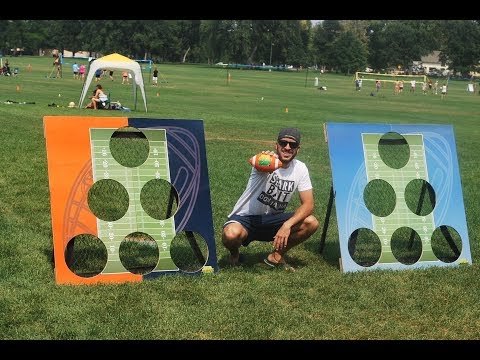 The company touts their eponymous game as a cross between beer pong, football, and cornhole... and... yea, I guess it is, actually.

Pros: It's incredibly fun and addictive, and it incorporates at least a slight level of athleticism and skill.

Cons: The learning curve seems steep here -- you'd have a tough time playing at even the most basic level if you didn't know how to throw a football. You also pretty much need to buy this set, and lugging it around doesn't seem to be as easy as... well, not lugging it around.

In the most base sense, you are pretty much playing a scaled-down version of horseshoes. It's like a mini, travel-sized lawn game.

Pros: It's fairly economical. If you tend to do this stuff a lot, a washer board can easily rest inside your trunk, or even under your seat for spontaneous use. It's also an easy game to pick up and play, and does not require a lot of instruction to learn or subsequently play.

Cons: Honestly... compared to the rest of the games on this list, it's kind of boring. If you're tailgating the Antiques Roadshow, this might be your move.

In two teams (with any number of participants), you chug a beer in a cup, then attempt to "flip" the cup, allowing it to land lid-side on the table. The first team to have all their participants successfully flip every cup (going player-by-player) wins.

Pros: All you really need is a surface and some red Solo cups. You can play with any amount of participants, and it's usually a high-energy, bonding affair. In its apparent simplicity, you'll find nuances that the common player might foolishly overlook. This is truly the game of 21st century kings. Also, you get to drink a lot.

Cons: None. It's easily the best drinking game known to humankind.

A two-player game in which you and your opponent stand back-to-back, take 10 paces, turn around, chug your beer, crush it, and throw it at each other. The first to make contact wins. Western-style whistling encouraged.

Pros: Almost assuredly, no one in your friend group has played this before, so there is some novelty. And as it's the best 1-v-1 game on this list, it's perfectly suited for settling personal grudges. It's simple enough that anyone can play (and everyone should play).

Cons: I think you should pretty much be able to draw your own conclusions here.