This now-classic line, paraphrased from Heath Ledger in 2007’s The Dark Knight, is specific to the incendiary relationship between Ledger’s Joker and Christian Bale’s Batman, but the quote is applicable to adversaries outside of Gotham, and across all mediums. Consider, for example, some of history’s greatest rivalries: Magic vs. Bird; Coke vs. Pepsi; Minaj vs. Cyrus. These intense, personal, and professional duels do more to bolster their participants’ game than any friendship ever could. Rivalries inspire greatness through a spirit of competition: it’s self-improvement via conflict, inspiration out of envy.

No one feud encapsulates this better than the ongoing clash between the yin and yang of celebrity food culture, Chefs Anthony Bourdain and Guy Fieri. They represent two ends of the celeb-chef spectrum -- the former is effortlessly refined and worldly, the latter is content to wear bowling shirts and guzzle pints of fried Velveeta -- and as such, one may not fully exist without his counterpart. The heat is coming from both sides of the kitchen, but they might mean more to one another than even they realize. They may, in fact, complete each other. 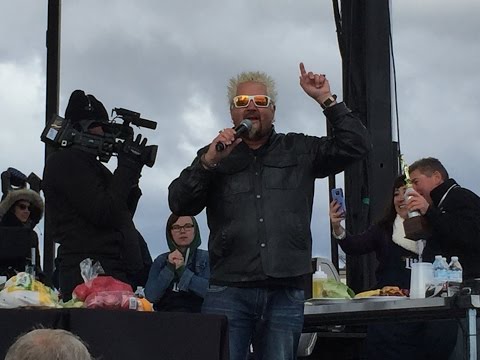 Human tribal tattoo and frozen-dinner slinger (as seen in the above video) Guy Fieri was a California-based chef and restaurateur who blasted into public notoriety after winning Food Network Star and landing his own series of reality shows -- most notably, Diners, Drive-Ins and Dives. Some believe his last name translates to “Man not afraid to look like an idiot,” but that’s probably not true. Also notable: Melissa McCarthy based her crass, flatulent Bridesmaids character on Fieri.

Anthony Bourdain was an ex-addict NYC chef who gained significant attention with his critically acclaimed book Kitchen Confidential, which blew the lid off Manhattan’s vice-laden restaurant scene. Eventually, he signed on with the Travel Channel to host No Reservations, and in essence became the predominant food/travel/drinking expert in the United States. Not a bad gig. He also has a history of ripping on other renowned chefs, McDonald's, vegetarians, and pretty much everything/anyone that isn’t him.

As arguably the two most talked-about chefs of our time -- and a duo that probably would have sat at different lunch tables in high school -- they were bound to butt heads eventually. Especially because Fieri is an easy target, frankly, and Bourdain could pick up a night shift as an instant-insult generator if he ever needed extra cash (read: he's kind of a dick).

Bourdain started throwing shots back in 2008, but Fieri bided his time. And though the fires of this feud were never tame, Fieri's latest remarks this past September brought the rivalry back into the public eye. Let’s lay out a brief timeline of the insult bout between the chefs.

Bourdain, January 2008:  "Did you ever see the Simpsons episode where it's decided that Itchy and Scratchy need a sidekick? So a committee gets together and they invent one called Poochie... Guy Fieri kind of looks like he's been designed by committee."

Bourdain, August 2011: "I look at Guy Fieri and I just think, 'Jesus, I'm glad that's not me.' You work that hard and there's not a single show of yours that you'd want to sit down and say, 'Hey, I made that last week. Look at that camera work. It's really good, huh?' I'm proud of what I do."

Bourdain, September 2012: "I’m fascinated by the Guy Fieri terror-dome they just opened up. 600 seats, something like that? 600 seats. And a gift shop. And all of these poor diners, drives and whatever, douchebags waddle in there. First of all, he single handedly turned the neighborhood into the Ed Hardy district which I’m a little pissed off about..."

Fieri, October 2012: “Everybody’s been asking me, ‘What on earth are you going to say at Bourdain’s roast? He’s been shit-talking your name everywhere.’ And I’ve been saying, ‘Don’t you worry about me. I won’t touch him with a 10-pole, because smack-talking Bourdain would be like hitting a piñata full of shit.’ Real messy. I want everyone to understand that I’m going to be the bigger man. I’m going to take the high road. I wouldn’t dare come up here and call Anthony Bourdain any of these things that people have called him: No-good, loud mouth, jerkoff, wannabe authority, pseudo rebel, nerd, shit-talking, blow hard, celebrity-seeking, Eric-Ripert coattail, Mario Batali ass-kissing hate monger... Jose Canseco of the food world, snaggle tooth, Lurch-looking motherfucker. No, I’m here to take the high road.”

Fieri, October 2012: "Anthony, I gotta ask a question, why do you hate me so much brother? ... Is it because you went to a fancy culinary school and I didn’t? I hear you’re the only one in class who did most of his cooking with a spoon and a Bic lighter."

Bourdain, October 2012: “The man, the legend, the guy who just dropped a 500-seat deuce into Times Square... Look at this thing, look, look! It’s like TGI Friday’s and Nickelback fucked Giant’s Stadium, and out came this. Who put up the money for this? What are you, 48? 49? Are you pushing 50? Which begs the question... when will you start to de-douche? Are we going to gradually segue to more age-appropriate attire? As the years pass, will the sun glass slowly move forward, eventually finding their way to, say, your eyes? What then? Will your cruel masters at Food Network jettison you like they did Mario and Emeril before you? I’m worried about this.”

Fieri, September 2015: “I don’t like him making fun of people, and I don’t like him talking shit. And he’s never talked shit to my face. I know he’s definitely gotta have issues, 'cos the average person doesn’t behave that way. It’s not that I’m not open to the reality that the food world was like this from a few people’s perspective. It’s just, What are you doing? What is your instigation? You have nothing else to fucking worry about than if I have bleached hair or not? I mean, fuck.” 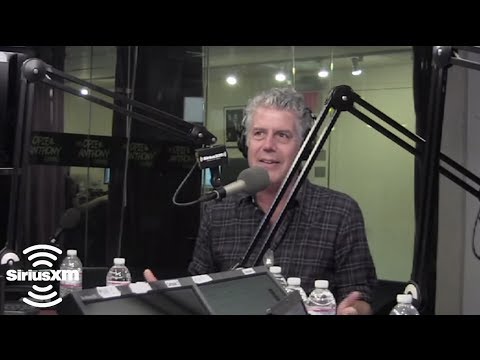 So who’s the villain here? Some would obviously point to Bourdain’s unprompted, poison-dart tongue, but others (including Bourdain himself, probably) would argue Fieri’s very presence on Earth is an evil affront to mankind.

In real-life rivalries, the roles of “villain” and “hero” are blurred. Bourdain is no more of a villain than Fieri is a hero (a hero to half-priced mozzarella sticks, maybe). They aren’t necessarily adversaries, they are the dissonant ends of a wide spectrum that is food culture. Fieri is a middle-American everyman with the soft edge of a Smash Mouth music video. He'll unabashedly pack sashimi-grade ahi and mango-jicama salsa into wonton taco shells and drizzle them with "wow-sabi" cream. Bourdain, on the other hand, is the guy at the frat party sipping pinot noir and detailing the “fresh oak notes” to the crowd of girls around him, who are inexplicably buying it. He’s pretentious, a little grating, and he somehow pulls it off.

But without each other -- the two opposites, the average Joe and the philosophical ex-addict -- they cannot fully assume the roles and personalities they themselves developed and depend upon. How can Bourdain lead the army of emerging “too-cool-for-school” foodies without the lumbering presence of Fieri’s Times Square mega-diner to rally against? How could the artery-clogging connoisseur Fieri be an everyman’s hero, and a champion of every man who loves heroes, without the antagonizing Bourdain playing the role of “the dude who takes himself way too seriously"? Bourdain’s pseudo-intellectual exploits in Parisian cafes might not even be considered pretentious without Fieri yelling, “Holy cheeseburger, Batman!” somewhere in the back of a greasy kitchen. They complement each other in ways no one else can -- by being polar opposites.

Studies have proven that rivalries increase performance physically and mentally, and whether or not Mr. Bourdain would care to admit it, Fieri’s mere presence probably served to bolster his own perception of himself, the way the world treats him, and celebrity chefdom at large. There would be no day if there weren’t nights to split the light, and Fieri’s neon-colored, frosted-tipped brand of darkness only makes Bourdain look brighter -- and vice versa, for Fieri fans (they're out there somewhere, right?).

Just like the “Bad Boy Pistons” pushed Jordan to bulk up and kick ass, or Pet Sounds made Lennon and McCartney aim for a more serious audience, or Kim Kardashian challenged Paris Hilton’s notions of just what a celebrity sex tape can be, the two chefs give each other the rival they deserve and the pressure they need to be just a little bit better, in their own respective ways.

Besides, you either die early an un-insulted celebrity chef, or live long enough to be mocked by Anthony Bourdain. It just happens.

Wil Fulton is a staff writer for Thrillist. He's more of a Martha Stewart man, personally. Follow him: @wilfulton.