In early 2009, Burger King decided to tear apart friendships in the name of free Whoppers.

If you don't remember (or have blocked this time-period from your brain due to emotional trauma) BK ran a promotion called the Whopper Sacrifice in January, '09. The premise was simple: unfriend 10 people on Facebook, gain a coupon for one free Whopper in the process.

The only thing worse than being unfriended in the name of a lone stupid-ass fast-food cheeseburger (priced at roughly $5, depending on location) is getting notified that one of your former friends ditched your online companionship for 1/10th of a Whopper. Which happened. Every time. 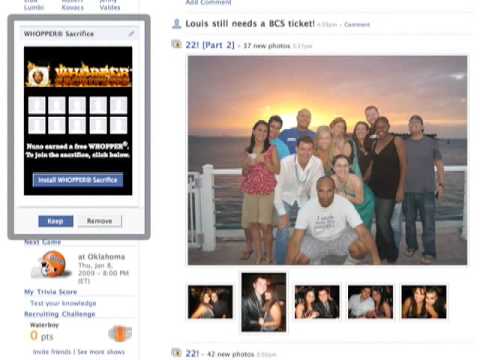 This marketing stunt -- though mean, slightly vapid, and very aggressive -- was kind of brilliant. It was one of the first fast food marketing campaigns to take full advantage of social media. Promotions like these are judged solely on how much attention they garner and this stormed up a shit ton of press and opinions.

Need proof? Nearly 234,000 Facebook users were de-friended over the course of the promotion. And we're still talking about it, right now. And we're not the only ones.

The impact is still rippling through the internet

Survivors and perpetrators of the Whopper sacrifice have blown up several threads on the petri dish of the Internet, Reddit.

Some people even remember using it on their friends... and girlfriends...

In the end, it was all in good fun. And some people really got it.

But Facebook shut it down after a brief run

But its legacy lives on

Looking back, the very fact that we are still discussing this, makes it a remarkably successful marketing push by Burger King. Trying to look back, and remember specific viral marketing campaigns, is akin to finding a lone poke from 2008 in the haystack of your timeline. But this one still has the gears of the Interweb turning. There's never really been anything else like it.

Though some friendships were ruined, many Whoppers were gained. And in the end, isn't it the fun nights with our Whoppers that we'll remember the most, when we are old and friendless?

Wil Fulton is a staff writer for Thrillist. He never lost a friend to a Whopper, but once lost a wife for a baked potato. Follow him @wilfulton.