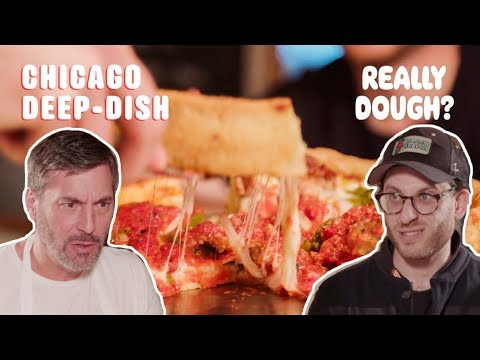 Pizza is no stranger to heated debate, whether it's who opened first or which shop does it better. And there's no greater deep-seated (or is it deep crusted?) beef than the fight between New York-style thin crust and Chicago deep dish [Editor's note: for another dive into this never-ending debate, check out this episode of Really Dough?].

As a New Yorker, pizza means a thin crust to me, end of discussion. I've always liked Chicago-style pizza just fine, with its buckets of ooey-gooey cheese, salty tomato sauce, and croissant-level buttery crust. But when I dig into a slice of deep dish, I'm readying myself for an experience more akin to pizza soup in a bread bowl than a slice of actual pizza.

So, real talk: is deep dish actually pizza? On a quest to settle this once and for all, I flew to the windiest city and embarked on an epic deep-dish deep dive. I hit up three of the city's most iconic pizzerias with four very hungry, very enthusiastic Chicagoans.

First stop: Pequod's, a cozy joint near DePaul University that's known far and wide for its crust, a thick, doughy slab blanketed in a layer of crispy, caramelized cheese. My companions were my girlfriend, Emily, a 29-year-old PhD student and Chicago native -- that's city, not suburbs, she'll have you know -- along with her friends Elizabeth, a 40-year-old lifelong Chicagoan who owns this killer Wicker Park flower shop, and Eliza, a 35-year-old visual artist who moved to Chicago from upstate New York a few years back.

Two salad-heavy days later, I headed for a back-to-back face-stuffing marathon with Chicago-based Thrillist editor Matt Lynch. Together, we hit up deep-dish chain overlords Lou Malnati's and Giordano's before I rushed out to catch my flight home (not my best idea). Their styles are pretty different -- Lou's is on the smaller side, less bready; Giordano's has an extra layer of dough supporting an obscene amount of molten mozz -- but both spots act as Chicago's true deep-dish ambassadors, their many locations eternally crammed with both hungry tourists and locals. Matt came of age in the Chicagoland 'burbs and his family was Team Giordano's all the way (though these days, despite his brother's vast disappointment, he's become more of a Lou's guy).

Over the course of the week, we ate, we drank, we debated, and then we ate some more. Here's what I learned.

Pizza should be portable

When pizza was first popularized back in 16th-century Naples, it was considered a poor person's dish and sold in the streets on the cheap. This rep continued through the centuries, with food trucks and corner stores taking the place of outdoor stands. But with deep dish? Not so much. Aside from delivery orders, Chicago pizza is a restaurant-only experience, far divorced from the food's original intention.

Over a heaping pan full of Pequod's pie, New Yorker-turned-Chicagoan Eliza offered a one-foot-in-each-world perspective on this conundrum. "You can like deep dish, but it doesn't do any of the work of New York pizza," she said. "I can take an NY slice with me, get it at any hour, and it costs me $1. It's for when you need an in-between thing, before you go out, after you go out. It's always accessible. And good. That's not deep dish at all."

Across town at Lou Malnati's River North location, I brought the issue up with Matt. He agreed. "It's not something you want for a quick bite on the go. Although offices Downtown do get it brought in for lunch sometimes," he told me, cringing at the thought. "Even then, though, you can only eat one slice if you're planning on doing anything else with your day."

It was the original fast food

Before I trekked out to Chicago, I had no idea deep dish took a full 45 to 60 minutes to cook -- and that's not even counting the 20-30 minutes you need to get through those massive and endlessly chewy slices. Eating it is an enormous commitment, like sitting down for a full-length Hollywood feature.

"When I first moved here, I was so mad about the pizza situation," griped Eliza. "I thought, 'I don't want lasagna pizza and I don't want to wait an hour.' Seriously, who's got 45 minutes for some fuckin' pizza?"

And pizza should be quick and easy

Most modern pizza is, by nature, a communal food meant to feed a group of people in equal, easy-to-serve proportions. That's been at the very core of American pizza since rickety street carts sold the stuff for a nickel a pop, and lives on in the form of the almighty slice. And deep dish is not a slice-friendly food.

"Nobody wants to sell you a slice here," Eliza told me, boiling over with frustration. "You know how much struggle you have to go through to get a fuckin' slice here? There might be a couple of places, but they're few and far between."

That deep dish refuses to get into the slice game is baffling to me -- those pieces are so filling, a restaurant could make bank on them. The whole practice is very anti-pizza.

It should double as a snack

The fact of the matter is, deep dish is just too much -- too much cheese, too much crust, too much sauce, too much everything. Even the toppings are extreme, literal sheets of sausage and pepperoni stacked like scalloped shingles on a roof. Eating it feels like slogging through dense, cheesy quicksand -- tasty quicksand, but quicksand all the same. It's basically Ambien in food form.

The pie at Giordano's, for example, was loaded with more cheese than the Wisconsin State Fair. It seeped out from inside the pie, spreading onto the plate like The Blob. It tasted like regret. It was, without a doubt, the least pizza-like of the three.

"Honestly, if I was trying to sell someone from New York on Chicago pizza, this would not be where I'd take them," admitted Matt. "It's a bit much for some people from Chicago, even. This is hibernation food."

You should never eat pizza with a fork and knife

"You kind of have to do the knife-and-fork thing for the first few bites, but once you get to the halfway point, you can pick it up and eat it," Matt said (a bold-faced lie). "But yeah, you're not going to fold it."

Who am I, John Kasich? That shit is embarrassing.

And the cheese should go on top of the sauce

When our Giordano's server dropped the pie, all I saw was sauce, scoops upon scoops of rich tomato puree flecked with oregano and pepper. Don't get me wrong -- I adore sauce. I think it's the backbone of any good pie, the one ingredient that can truly distinguish one slice from another. But on top? Blanketing all that beautiful cheese like some sort of lumpy, liquid comforter? No way. That's simply not its function.

"The sauce's job is to act as a lubricant between the crust and the cheese, and this obviously isn't doing that," I explained, trying to suppress my outrage. "It tastes alright altogether, but the texture is completely off."

"Do you know the reason for that?" asked Matt, knowing full well I did not. "They have to cook for so long that if you left the cheese on top, it would burn. The sauce is keeping the cheese from burning."

As the great Jon Stewart famously ranted, "The sauce, naked and cold. On display like some sort of sauce whore. This is an above-ground marinara swimming pool for rats." Amen.

When Emily texted Elizabeth about going out for deep dish, it was Pequod's or bust.

"Honestly, I hate deep-dish pizza. I think Lou Malnati's is dumb," Elizabeth said, voicing her disdain for one of Chicago's most beloved -- and touristy -- old-school pizzerias. "Pequod's is the only deep dish I acknowledge to exist in the world. But what I love is a traditional South Side Chicago thin crust. It's not like New York pizza -- it's sturdy and cut into squares. My favorite South Side pizza is called Falco's -- you go there to watch the motherf*ckin' hockey game, like da guys, da guys and da hockey. It's very Chicago."

Over at Giordano's, Matt was even quicker to say that deep dish isn't exactly Chicago's main squeeze.

"The thing is, the pizza most Chicagoans crave is actually thin crust, square-cut, tavern-style," he said. "You can't eat deep dish all the time. It's an occasion, a treat, and usually just happens when people are visiting -- you can totally fill your yearly deep-dish quota just taking out-of-towners. The only other time for deep dish is during blizzards, when you're just like, 'F*ck it. We're doing this.'"

Deep-dish pizza is about hometown pride

"Because it's ours, we'll defend it to the death," Matt said between labored bites. "Most people do genuinely have a love for it and enjoy eating it. As much as this city enjoys excess we still recognize there have to be some limits in our day-to-day lives."

I find this talking point super charming, even redeeming. I'm a huge fan of the Midwest, and I really admire Chicago's hardworking, endlessly loyal disposition. It might not always come in first -- it's not called Second City for nothing -- but it's got grit, there's no denying that.

This is how Emily put it: "Part of the experience of deep dish is that it's devastating, you know what I mean? But it's a Chicago thing -- it's like you're excited about eating so much that you'll feel terrible. It's like surviving the winter, it's like Malort -- a real test of endurance. It's like loving the Bears."

So, is deep dish actually pizza?

We've arrived at the final question, the big kahuna, the tomato sauce-covered elephant in the room. So let's briefly go over what we've learned.

Before I laid down the law, though, I threw the question to my dining companions.

"Do I consider it pizza?" Eliza asked, taking a moment to think it over. "Yeah, it's pizza. It's not the pizza that I want, but it's pizza."

Then tough-as-nails Chicagoan Elizabeth came at me. Hard. "I don't understand why that question keeps coming up. It's called pizza, so I consider it pizza. Y'all are just being bitchy about it," she said defiantly. "When that caramelized cheese hits your f*ckin' mouth, though, you just can't deny it."

"I kinda see it like, if you're used to grabbing fast-food cheeseburgers on the go, obviously going for something like the Minetta Tavern Burger, like some giant hunk of meat, is a completely different experience," he said. "It does very different things to you. But they're both still burgers."

"But, the thing about the big, thick steak burger is that there's a huge quality difference," I countered. "The big one is trying to show off the beef -- it's bigger because the meat is better, ostensibly, and there's more care going into how it's made. Obviously there's more ingredients in deep dish, but I wouldn't say the quality is that different."

"Right, it's not like a high-end, artisanal pursuit. It's about volume," he conceded. "Maybe that's where the analogy breaks down." You said it, not me.

So, after copious research, several grown-up pizza parties, and an additional 4 to 5lbs, I've come to the conclusion that deep dish is not, in fact, pizza. But you know what? I like it. I'm here for it. A spade is a spade and this is no spade, but it tastes damn good. And, at the end of the day, that's all that really matters.

Meredith Heil is a staff writer for Thrillist. It’s just her and la cucaracha tonight, cold pizza with the hot Sriracha tonight. Share a slice with @mereditto.