How to Make the Dalgona Candy from ‘Squid Game’

This two-ingredient candy is perfect for Halloween or bingeing the Netflix hit show.

Photos courtesy of Netflix and JinJoo Lee; Design by Chineme Elobuike for Thrillist

“I saw them all the time when we were kids at every street corner in the neighborhood—these little pop-up tents with a parasol [where] an old man was selling candy,” she says. “They would make the candy, press the shape, and they would sell it to the kids and their challenge was exactly the way the game actually appears in Squid Game: to cut out the shape without breaking it.”

The consequences for losing, however, weren’t nearly as grim as Netflix's latest hit series. “If you cut out the shape without breaking it and you take it back to the vendor, then he gives you another candy, or a toy,” Lee explains. “Because there’s a little bit of a gambling element there, kids were hooked and we totally grew up on it.”

Although Lee doesn’t know the precise history of dalgona candy, food—and particularly sweet treats—were difficult to find following the Korean War in the mid-’50s. Candy was considered a luxury, but dalgona was easier to make because it only required two ingredients: glucose and baking soda. The glucose-based candy is what is known as dalgona, whereas the recipe that swaps out sugar for glucose is actually called ppopgi.

“Originally, they were two different things, but over the years the glucose version totally disappeared,” Lee says The term dalgona has now come to represent both versions of the candy.

“I saw them all the time when we were kids at every street corner in the neighborhood—these little pop-up tents with a parasol [where] an old man was selling candy.”

Honeycomb candy has many names depending on where you are in the world—cinder toffee in England, hokey pokey in New Zealand, seafoam candy along the Western coast of the United States. Although the recipe itself is not uniquely Korean, the stamping—and consequently the distinct shapes and game you see in Squid Game—is.

“I think Koreans these days are very good at portraying the troubles of modern day times,” Lee ponders. “People face those struggles and the difficulties and [it shows] how low people can go.” Although Lee did watch part of Squid Game, including Episode 3, "The Man with the Umbrella," that features the dalgona candy, she admits the intense violence was hard to watch and didn’t end up finishing the series. “But using the ppopgi game was pretty genius, I think,” she smiles.

To make dalgona at home, all you really need is sugar and baking soda—and a little bit of vegetable oil to make sure the tacky honeycomb mixture doesn’t get stuck.

“There is a time-sensitive part,” Lee advises. “If you leave [the candy] too long, it'll burn very quickly. Also, you have to be quick in moving it from the ladle onto a plate or a metal tray.” She suggests prepping the ingredients and having a helper in case things go awry, and also using a less expensive ladle lest the entire thing gets coated in sticky caramel and is rendered useless in other cooking scenarios. An additional tip is to use less baking soda than you think you need—Lee suggests a tiny, tiny pinch.

“Just have fun with it,” Lee smiles. “I think kids would love it. You can do whatever shape you want, although I’m sure now the umbrella shape will be very popular now.” 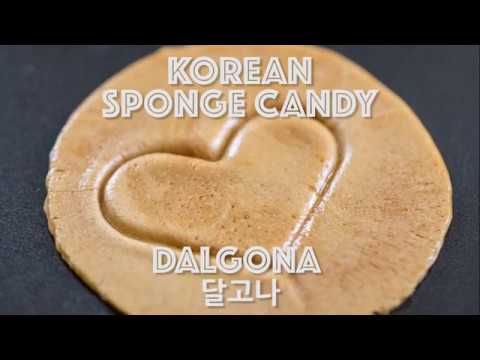 Directions:
1. Coat a plate or a metal or stone surface with a bit of vegetable oil. Coat oil on a hotteok press or any ceramic or metal plate/pan that you can use to press the melted sugar. Have these two items and a silicon spatula ready next to your stove.
2. Add 1 tablespoon of sugar in a ladle or large spoon.
3. Hold the ladle or spoon on top of the stove at medium-low heat and melt sugar for about 3-4 min until it becomes liquid and is transparent. Avoid burning by stirring constantly with a chopstick while it melts and take it away from the heat anytime it starts to smoke. Lower the heat if necessary.
4. Once it has turned into sugar syrup, add a pinch (or 3 dips with the end of the chopstick - see video) of baking soda to the syrup.
5. Immediately take the ladle off the heat and mix soda with the syrup.
6. Move the ladle one more time back on top of the heat and heat it up for just about 4-5 seconds, until the sugar mixture starts to puff up. Don't wait until it puffs up fully, then you are most likely going to burn it.
7. Transfer sugar and soda mixture onto a greased plate or surface. Immediately press it down to make a thin disc like candy. Press for 3 seconds or so and then before it fully hardens, press your mold on the candy—not so hard that the shape will be cut out.
8. Let it cool and then you have a fun Korean Dalgona Sugar Sponge Candy!

Note: The hardest part about making this candy is the pressing down and making indentation with the mold. You don’t NEED to do that if you just want to enjoy the taste only. It will just be whatever shape you leave it.