Mild-Mannered Man Eats More Big Macs Than Anyone, Has Clean Bill of Health

The McDonald's Big Mac is one mysterious sandwich. When Super Size Me first came out 12 years ago, the conventional wisdom seemed abundantly clear: eating this much fast food wasn't good for you, and it can maybe kill you eventually. Don Gorske -- who's held the Guinness World Record for Big Mac digestion for 15 years now -- could care less. He's eaten his 29,000th and feels like a champ.

"Why eat these?" Gorske asks, brandishing a Big Mac for the camera. "'Cuz it's the best food in the world."

The 63-year-old Wisconsin man eats two a day, any which way. He's defrosted Big Macs mailed to him from Hawaii and keeps a stash in the freezer. He's been the subject of a 2005 documentary, made TV appearances, and -- almost shockingly -- seems otherwise perfectly ordinary. Don't take my word for it, watch the video produced by Wisconsin's 13 News Now: 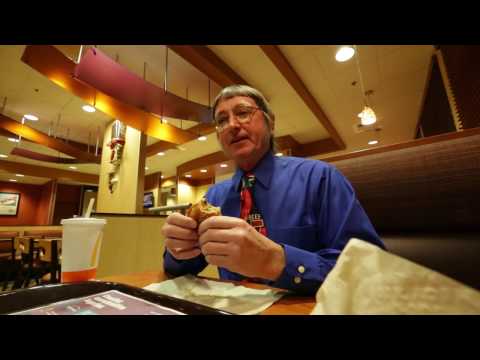 The way this eminently normal man describes his passion is pretty amazing. He has six Big Macs in his freezer right now in case of a snowstorm. He has a special booth at his local McDonald's where he proposed to his wife in 1975, complete with a cheesing framed photo of him in front of the Statue of Liberty, Big Mac in hand.

One McDonald's Big Mac contains 540 calories with 28 percent fat. Multiply that by 29,000 Big Macs and you get 15,660,000 calories. And yet, apparently his cholesterol has never gone above 160 mg/dL -- which is not even borderline high, per this chart. He's over six feet tall and weighs about 200 pounds. His wife Mary, a nurse, doesn't often join him in this bizarre lifelong mission, but she insists that he also eat McDonald's parfait yogurt cups.

"She told me I should eat something healthy, and she's a nurse," Gorske said. "I think it's paid off because I get a clean bill of health every year."

All of which boggles the mind. If he lives to 86, he'll have eaten 40,000 Big Macs, and -- truthfully -- I pray he does. However weirded out you might be by the logic and the premise, the Big Mac's appeal cannot be denied. It's an essential American burger, no matter how many Millennials have allegedly tasted it or not.

"I tell my kids that when I do go, they better know the count of the last Big Mac I’ve eaten," he says.

I kinda want one now. Shit.

Eric Vilas-Boas is a writer and editor at Thrillist.