Behind enemy lines at the most fantastic food fight ever

There's nothing that excites a 10-year-old quite as much as a food fight, so it was only fitting that the Alamo Drafthouse would kick off the 10th anniversary of the horror/sci-fi/totally-weird film celebration known as Fantastic Fest with some good ol' fashioned edible projectile warfare.

Read on to see our photos and scroll to the bottom to watch the official video.

The Austin,TX-based festival kicked off with the US premiere of Kevin Smith's Tusk, followed by a raging party at Drafthouse's attached bar, The Highball. After a performance by a band dressed in unicorn costumes, the smashing of a human piñata, and a surprisingly charming aging magician, Alamo founder Tim League began a conga line leading festival-goers through the theater and into the back alley.

Once in the alley, nearly 200 combatants donned their armor: thin, white painter suits that turned out to not actually provide much protection against the impending barrage. It's worth noting that your intrepid photographer wasn't quick enough to grab a suit, and was one of the few truly defenseless participants.

Once the suits had been donned, the anticipation in the air was as thick as a tub of chocolate pudding.

The weaponry: 20gal tubs of mashed potatoes, spaghetti in red sauce, and some dangerously firm tomatoes.

The arsenal totaled 320gal worth of edible firepower.

Of all the weaponry, the tomatoes were the most dangerous.

Organizer Zach Carlson learned the power of the tomato the hard way. He took a shot to the bathing-suit area and fell into a Slip 'N Slide of pudding.

At this point you might be thinking, hey, that's a whole lot of wasted mashed potatoes...

But you can put the ethics hounds back into the moral doghouse, because no actually-edible food was harmed in the making of this battle. All the ingredients were either expired, too bruised, or just too orange-colored to be sold for public consumption.

During the conception of this crazy idea, there was originally talk of separating contestants into teams, quartering the war into rounds, and having a system to decide winners and losers.

But in the end they came to the realization that in a war of pudding, every man is truly for himself.

As ammunition stores were depleted, they literally sent in the clowns, armed with pies, whipped cream, and a disregard for future dry-cleaning bills.

The following day, while introducing one of the films, League recounted his personal aftermath from the events. Despite showering when he got home like any responsible human, he awoke to the sad realization that his pudding-caked toes had ruined his fancy bedsheets.

His wife's response? She probably said something like, "that's fantastic". Or made him sleep on the couch. 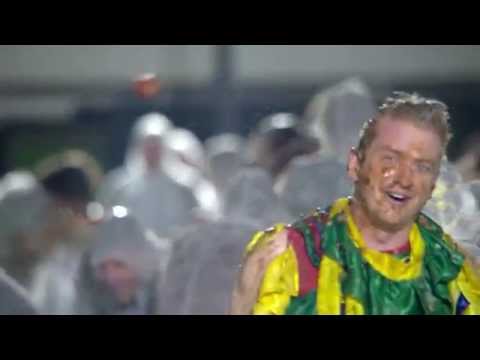 Dan Gentile is a staff writer on Thrillist's National Food and Drink team. His camera miraculously survived this story, and he doesn't own sheets nearly nice enough to mourn, but he did destroy a previously functional pair of sneakers. Follow him to online footwear shopping at @Dannosphere.