This 14ft pumpkin pie was made by 40 cooks, two excavators

Not contented, seemingly, by the vast array of pumpkin spice foods on the market currently, a team of chefs in central China recently decided to make one of the biggest pumpkin pies in the world -- one so large, in fact, that it took two huge excavators to lift and spread the ingredients. The final product weighed in at 1,894lbs and was 14ft in diameter.

The pumpkin pie was not made with a traditional American recipe; the 40 cooks involved with the project mixed cooked pumpkin, flour, and powdered sugar with dates and raisins to create the base, and the pumpkin paste was steamed (rather than baked) using eight burners. In what can only be termed a great pumpkin miracle, the pie only took 30 minutes to cook fully.

Watch a video of it being made, below: 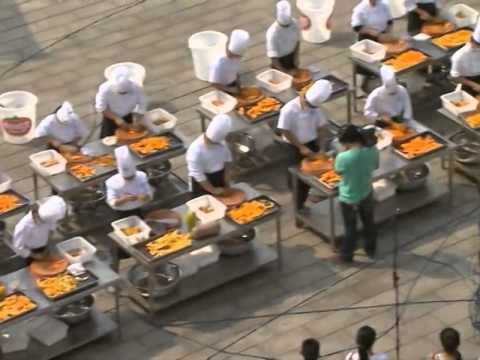 Interestingly enough, this isn't even the largest pumpkin pie ever -- that title is held by one that was made in New Bremen, OH back in 2010. Keep on striving, America.

Adam Lapetina is a Food/Drink staff writer for Thrillist, and one normal-sized slice is enough for him. Read his musings at @adamlapetina.