It's Actually Super Easy to Overdose on Halloween Candy

In the days immediately following Halloween, my brother and I would consist on a diet we naively coined "Halloween Helper," where we replaced every meal with a steady stream of Kit Kats, Tootsie Roll Pops, and pretty much everything else in our trick-or-treat pillowcase aside from the Care Bear pencils from that awful old woman three doors down who was worried about the ramifications all this processed sugar would have on our nation's youth.

As it turns out, copious amounts of high-fructose-laced candy rot teeth, make you portly, and cause incurable impotence by the time you hit 25 (that happened to everyone, right?). And in a concentrated, Halloween-sized dose, it can even kill you. The folks at Reactions recently laid it all out for us, in video form.

As it turns out, it's ridiculously easy to OD on your Halloween booty. 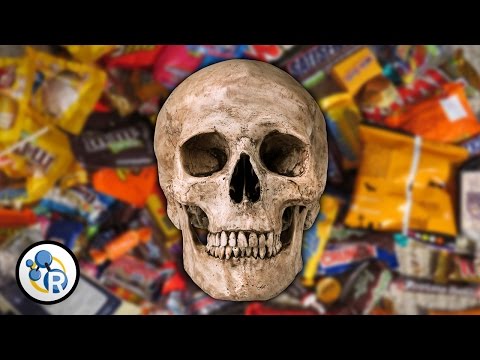 So, if for some reason you don't want to watch that video (it's fine), their number-crunching determined that 262 fun-size candy bars in one sitting would be plenty to kill off an otherwise healthy, 180lb human person. That's about $30 worth of candy, 20,000 calories, or 5.5lbs of sugar.

According to the video, that would also amount to 1,627 pieces of candy corn, if you are a monster and would eat more than one piece of candy corn per decade. Basically, your liver wouldn't be able to process the amount of sugar consumed -- which is fair, as your liver probably works pretty hard as is.

Do what you will with that information. Maybe limit the kiddies to one lil' Snickers bar per visit. Perhaps serve up apples, which can aptly be described as nature's candy. But whatever you do, don't become the "pencil lady" of your 'hood.

For that is a fate even worse than being responsible for killing our nation's youth -- because then, at least you're still cool.

Wil Fulton is a staff writer for Thrillist. He's never once peed on a busboy, but once he threw up on a horse. Follow him @wilfulton.