Weekend Project: How to Make Perfectly Puffy Tortillas at Home

All you need is masa harina, water, and a bit of grit.

If you’re like me, your kitchen is always stocked with tortillas. I keep large, floppier flour tortillas for breakfast burritos and my occasional lazy quesadilla, whereas small corn tortillas are saved for taco nights—chicken, shrimp, or homemade carnitas. Though I always make my own fillings from scratch, it never really occurred to me to attempt my own tortillas. Subconsciously, I think I was just intimidated.

The good news is that it’s not as challenging as it seems. “I used to kind of be intimidated by it just because I had this association with how long it took me to prepare masa from the kernel,” Jorge Gaviria, the founder and CEO of Los Angeles-based Masienda, says. “Within two minutes, I’ve got masa that’s ready to go and it’s mixed properly. I’d say in ten minutes, I’ve got tortillas ready for dinner for four. It’s pretty amazing.”

Though Gaviria admits that “making tortillas is a lifelong pursuit,” he encourages everyone to give it a try at home. “You are getting a really fresh tortilla that is just kind of the essence of what it should be. The texture is great; as soon as it comes off, it’s piping hot. There’s no better moment for that tortilla.”

Tools you’ll need for preparing your own tortillas

Though it’s not a necessity, Gaviria highly recommends having a comal and tortilla press. “It’s good to make the process easier on yourself at home,” he explains. The comal provides plenty of space to flip tortillas with a more regulated temperature, ensuring that none of your hard work sticks to the pan. While you’re cooking your tortillas, the comal leaves plenty of room to stir your carne asada, eggs, or whatever fillings you’re going to pair with your tortillas. “Tortillas, tacos, masa in general are usually kind of a gathering food. You certainly can make things on your own—I do all the time—but I think most people think of it as an occasion. It accommodates the working space that you need.” This part was so important to him, in fact, that he collaborated with Made In Cookware to craft his dream comal. If you’d rather try something you already have, Gaviria suggests non-stick pans or well-seasoned cast iron pans (just watch out for the high temperature; it may burn the masa).

The tortilla press provides uniformity to your tortillas, which will allow the masa to cook evenly on the pan. If you don’t have one laying around, Gaviria encourages trying other flat, household items like a book or bottom of a pan.

“You always want to add two plastic sheets of paper. The thinner you can get, the better, so using those old school grocery bags is probably best,” he says. The plastic sheets prevent the masa from sticking to your other tools. “Once you got the ball rolled, you put that roll on top of the film, put another film over it, and then just smush it with the bottom of your pan or a book. [You’ll need] 20-25 pounds of force pressing down on that tortilla to get the compression right.”

From there, slide the tortilla into your comal or pan and let it cook.

Making my own tortillas

With Gaviria’s tips and tricks in mind, I set out to make my own tortillas using just Masienda’s masa harina and water. If you want to add a little salt or lard, it’s entirely up to you. “Oaxacan tortillas are kind of the first tortillas I ever fell in love with and there they’re very clean; you taste the corn, you don’t use any oil. They’re just doing it on the dry comal,” Gaviria says. “I like that flavor where it gets a little crusty on the outside, a little molten on the inside. In Mexico City, totally different tortilla. They definitely reheat them in fat and it’s just kind of a style preference.”

I added one cup of flour and one scant cup of water and, using my hands, began massaging the wet and dry together to form a ball of masa dough. I have to admit, it’s tricky work. The dough can feel overly wet, and seconds later begin drying out. If this happens, Gaviria mentions it’s helpful to have a spray bottle on hand to lightly mist your masa if it’s getting too dry. “Your goal is that any time you’re about to press it, it should feel moist to the touch—almost to the point that it’s sticky—but it’s not leaving any kind of tackiness in your hands,” he says. Fresh tortillas, however, should be just that: made fresh and consumed fresh.

After forming my dough, I used two plates covered in plastic wrap to press my tortillas because I don’t have my own tortilla press at home. This method is effective enough, but my tortillas were not uniform—though they had plenty of personality.
As soon as the tortillas were flattened and thin enough, I tossed them on my hot, dry comal and let them cook through. What you’re looking for is the mythical puff; as the moisture within the dough heats up, it gets trapped in the confines of the tortilla and causes the tortilla to expand. The steam from this cooks the inside of the tortilla, ensuring that you won’t be eating wet masa dough when the tortilla comes off the comal.

But, like Gaviria said, making tortillas is a lifelong pursuit. My first attempt had a tiny, tiny puff—but the tortilla itself still tasted good! Don’t be discouraged if your first try isn’t perfect. “Anytime you cook something for the first time ever, whether you’re frying an egg or making a new recipe, you learn as you go along,” Gaviria said encouragingly. “The second time is going to be dramatically better than the first time.” 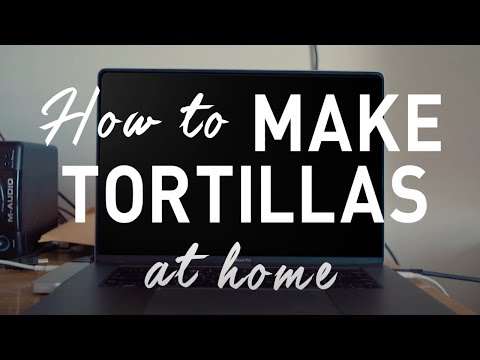 Slowly add the water to the dry masa flour in a large bowl, stirring the masa to incorporate evenly by hand (you may also choose to use a standup mixer with paddle extension). Knead until the water is evenly incorporated and no dry, powdery spots remain. Add salt, spices and seasonings to taste (optional), evenly incorporating throughout finished masa. If aiming for a masa for tortillas, you want a finished masa that is moist to touch, but not tacky (leaving bits of wet masa on your hand and fingers).

Once prepared, use immediately, or rehydrate with additional water before use (if waiting several minutes before use).

Tortilla Note: For additional hydration during tortilla cooking process, we recommend using a spray bottle/mister to lightly hydrate each side of the tortilla (to prevent dryness and cracking).

*Warm water (~100 degrees F, or the hot setting on your faucet) is recommended, in order to begin blooming the natural flavor of the masa and to fully activate the small bits of pericarp (corn skin) in the masa flour (which help the masa bind, naturally).

*Water can be substituted with other liquids such as stocks, broths, juices etc., depending on the desired flavor. Spices may also be added. Masienda respects tradition while encouraging creativity for all cooks.