Chatting with Kelis About Her Buzzy New Netflix Show, 'Cooked with Cannabis'

The cooking competition formula has been taken to higher heights.

Edibles have come a long way. No longer do we have to sustain ourselves with crumbly brownies wrapped in foil, reeking of unforgettable skunk-like terroir. These days, brownies have evolved into fudgy delicacies that work in tandem with the natural aromas of weed. The cannabis industry has dramatically shifted with growing acceptance into the mainstream, as eleven states have legalized it for recreational use. With the plant’s growing accessibility, chefs and bartenders have been able to craft more sophisticated edibles. James Beard award-winning pastry chef, Mindy Segal, has followed the shelf-stable guidelines for crafting edibles by making sticky brittles and hot chocolate mix. CBD cocktails have gained notoriety for providing a different type of buzz -- one that is more soothing, yet approachable and drinkable. You can now turn to gentle butters for baking or spreading, infused vinaigrettes, and even fiery hot sauces. Cannabis isn’t just a means to get high; it’s a tool and ingredient that can unlock new culinary experiences, both on our palates and in our psyches.

The gastronomical artistry of chefs who know the fine balance between flavor and unlocking weed’s medicinal properties is the exact thing that Netflix’s new show, Cooked with Cannabis, is trying to highlight. Hosted by chef and Grammy-nominated artists, Kelis, the series is reminiscent of the cooking competition formats you’ve seen before: themed episodes, three contestants throwing down, and a $10,000 cash prize. However, the temperamental ingredient that is weed is also thrown into the mix. The “cheftestants” -- who have all cooked with cannabis before -- have to properly dose their dishes so that the judges are still sober enough to, well, judge.

We caught up with Kelis to discuss her thoughts on what makes for a well-rounded, weed-infused dish and explore the roles that food and cannabis have played in her career as a musician and chef. 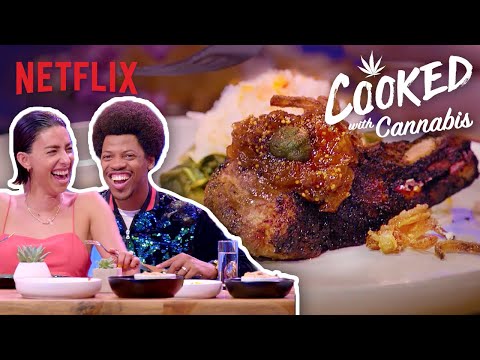 Thrillist: What do you think makes for a winning cannabis dish?
Kelis: First and foremost, you want to make sure you have a good dish. You certainly want it to be inventive and you want it to taste good because it is a competition, but also as it relates to cannabis. It can come down to the strain of the flower that can compliment the flavor/ingredients of the dish.

What are the most common mistakes when it comes to cooking with cannabis?
Kelis:You really need to know what you’re doing to be able to balance the THC and CBD. You need an understanding of the process to heat the cannabis flower which activates the THC to give it the effects. If you do it wrong, you won’t be able to unlock the psychoactive properties and you will ruin the bud.

Cannabis seems like a tricky ingredient to work with because the flavor and smell can be so overpowering. What are the tricks and techniques that chefs need to come prepared with to excel on Cooked with Cannabis?
Kelis: Again, I think it comes down to the balance of the THC to CBD. So the level at which you hear the cannabis flower, the strain of the bud is important because you can select one that really compliments your dish. We had an amazing halibut ceviche on the show that was made with a “dream queen,” marijuana strain and had a hint of tropical in the bud which went really well with the dish.

In your experience, what is the best dish/vehicle to use it?
Kelis: I think sauces work really well. On the show we had someone make an amazing piri piri sauce, but I’ve had some amazing infused olive oils and butters that complimented everything really well.

How have both cannabis and food shaped your career?
Kelis: Well, I don't know if I would say cannabis has shaped my career, per se. While I have cooked with cannabis before, I am NOT a cannabis chef, but as a chef and a believer in the cannabis plant, I was definitely interested in all that the plant has to offer as an ingredient. Food has definitely shaped my career. It has always been in my life. My mother was also a chef and really influenced me from an early age. Through music, I was able to travel and eat at so many amazing places that later informed my first cookbook, My Life On A Plate. Those travels also informed my desire to go to culinary school at Le Cordon Bleu, to start my sauce line Bounty & Full, and inspired my last album, FOOD.

What has it been like as a chef versus a musician?
Kelis: Going to culinary school and becoming a professional chef was one of the best decisions I ever made. It allowed me to formally train on something that I loved for so long. Coming from the music world, it certainly required me to prove myself a bit to other chefs, but it’s been great. I’ve launched my own sauce line, I’ve had food trucks at music festivals, I’ve done cooking demos, and hopefully one day, I’ll be able to open up my own restaurant!

How has growing up in New York in a diverse family sculpted your palate?
Kelis: Oh, it’s shaped so much. The food that I love and cook tends to be full of bold flavors. I like heat, international flavors, and bright colors. A lot of that came from my Afro-Latina background for sure and also from being able to walk down the street in NYC and have some amazing Jamaican food, Vietmanese, etc.

As a native New Yorker, what is the most iconic dish and/or restaurant in the city?
Kelis: Oh man... that’s so hard. Maybe pizza? Or, maybe an amazing bodega breakfast sandwich on a bagel.

We have to ask: did anyone on the show attempt to make a cannabis-infused milkshake?
Kelis: Ha! No… maybe next season!

Thanks for speaking with us, Kelis.