The Delicious Ketchup Snack That Americans Are Totally Missing Out On

Are you there Drake (or any other Canadian, really...)? It's me, Wil -- I'm just a boy on the internet, trying to understand the Heinz-hued mystery of the ketchup chip.

Here's the deal: The average American eats about 71 pounds of ketchup every year. Which means I probably eat about 600 pounds of ketchup per week (which is approximately the weight of a male North American grizzly bear, for reference). Americans love the sugary, tomato-based, is-this-really-a-vegetable(?) condiment. And I really, really, really love it. Ketchup is the reason I eat french fries 3 times a week. It's why I can't successfully wear white clothing (even after Labor Day). Ketchup is the source of fast food cashiers' well-known disdain for me. It's not just a condiment -- I was born in Pittsburgh (the ketchup capital of the world), after all. It's sacrosanct. It's a bottle on a proverbial pedestal. And no, it is certainly not a garbage condiment.

But one thing Americans -- and I, until recently -- do not love, decidedly, is the ketchup chip.

Recently, this dude from Montreal was subletting a room in my apartment. When he found out I was going to be visiting the city of his birth, he had but one request: "Please, for the love of Justin Trudeau's chiseled abs and slighty-too-self-aware personality, bring back some ketchup chips."

Apparently, Canadians are into ketchup chips. Like, really into them. Canadians are more passionate about this snack than they would be about a hypothetical, maple syrup-based mixed media art installation of Celine Dion eating poutine whilst riding a moose in a Maple Leafs jersey and calling someone a hoser.

Unfortunately, Derek the Québécois unceremoniously moved to California while I was away (without saying goodbye!).

Thus, I was left with a bag of ketchup chips, and no Canadian in sight to consume them, reimburse me, or answer my questions. Even though I clearly love ketchup, something about the idea of ketchup flavored chips seemed… for lack of a better phrase, gross as shit.

I was left with a predicament in my normally ketchup-stained hands, and a barrel full of newfound questions:

"Why am I -- an ardent ketchup lover -- so adverse to trying these chips?"

"How is Canada -- a country that is not America -- obsessed with a snack that seems so quintessentially American?"

"Why are we -- a ketchup-obsessed nation -- not obsessed with ketchup chips, and even grossed out by them?"

"Would I -- a human who loves ketchup -- actually like them, if I tried them?"

"Why did Derek -- a Canadian expat who now owed me $10 for all these ketchup chips -- move to California, and why can't I find him on Venmo?"

I was ready to eat the $10 he owed me… along with some ketchup chips. 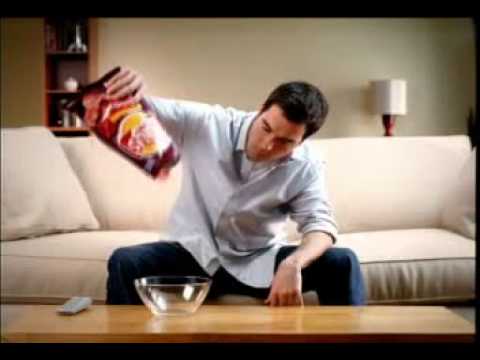 A (super-brief) history of ketchup chips

We won't get into the history of ketchup itself (although it should be noted that America's favorite condiment is of Chinese origin), as it would take a volume thicker than 100 ketchup packets to unfurl that tale.

The story of ketchup chips is a little less dense… if not totally transparent.

It's widely believed that Hostess Potato Chips "invented" the snack in the late 1970s (though by that time, french fries and ketchup had already become a standard duo, so they really just tweaked the formula for mass consumption), though some ketchup chip truthers think the snack was originally developed and sold by Herr's -- a small Pennsylvanian snack company. Even if they weren't the originators, Herr's has gone on to partner with Heinz, a fellow Keystone state-based company, to develop a co-branded ketchup chip that remains one of the more prominent varieties sold. The chip flavor has been a Canadian staple since the 1980s, but -- obviously -- has failed to truly capture the hearts, tongues, and minds of American snackers. Overall this history is about as exciting as a thinly slicing potatoes with my Great Aunt Linda on a cold Idaho morning. But still, I feel like I needed to give you some semblance of context in case this ever comes up in bar trivia.

More importantly, right now, ketchup chips can be found in almost every Canadian junk food section -- and some American stores -- by many, many different mass-producers of chips and chip-like objects.

To better understand the current state of the ketchup chip, let's take a look at some of the major players in said ketchup chip world.

I was in possession of three different types of ketchup chips: the Herr's, the Pringles, and the Lay's.

To say that ketchup chips taste like potato chips dipped in ketchup is to sorely simplify the situation. They have a specific taste that, really, is unlike anything else in the snacking world. They really don't taste like ketchup. They taste like a bottle of ketchup was blown apart, and all the molecules that comprise the "ketchup-ness" were dusted upon the chip in equal parts. You are left with lip-smacking acidity, a light, back of the tongue umami, and a vague sense that at one point, a tomato passed through these parts.

To be honest, at first, I was not impressed. It was like a bizarro reflection of fries and ketchup, without the hearty, sloppy core that I so closely associated with freedom and Americana and drive-through dinners by the dashboard light. But, after a couple of handfuls, I realized that ketchup chips weren't necessarily an acquired taste, as much as an immediately acquired taste. They're one of those snacks that at first may be met with a grimace, but will soon be met with another handful. And another.

Before I could tell my digestive track "sorry," (in a Canadian accent, obviously), I had polished off the entire bag of Lay's.

By the time I moved onto the Pringles tin -- and finally, the Heinz/Herr's collab that I was saving for last -- I realized that my love of ketchup was neither a hinderance nor a propellant to my admiration of ketchup chips.These are their own beasts. A chip with ketchup-like tendencies. A snack that was weirdly familiar, yet just different enough to seem almost -- dare I say -- exotic.

The ketchup chips had won me over, in spite of me.

Canada, it seems, was right all along.

Then why the hell don't Americans like ketchup chips?!

Once I conquered the formerly dry heave-inducing prospect of eating ketchup chips, this is the question that kept me up at night, while I clutched my empty tin of ketchup Pringles.

How could a ketchup obsessed nation so clearly deflect and reject this seemingly quintessentially American snack?

I asked Thrillist's Canadian-in-residence, Entertainment Staff Writer, and all-around OK guy (for a Canadian), Sean Fitz-Gerald. He told me he neither knew why Canadians love them so much, nor why they never caught on in America.

And over the course of questioning other Canadians, none of them could really explain either phenomenon. American have no problem guzzling down lattes flavored like pumpkin potpourri, sandwiches that use fried chicken as buns, Oreos that taste like Swedish Fish, or literally anything on this list. Yet when the concept of a "ketchup chip" is broached, groans rattle over the Western plains. We'll soak our fries, drown our burgers, and controversially bedeck our hot dogs with the stuff, yet we deny our potato chips a light dusting of the pseudo-tomato sauce. Hell, Chicken and Waffle-flavored Lay's are a thing people are apparently into, as is Sriracha-flavored everything. So it can't that Americans are too prude. Also, this is ketchup we're talking about. We're basically bonging the stuff straight after we finish breastfeeding.

And the vacuum of ketchup chips is not for a lack of trying, or dearth of exposure: ketchup chips were equally introduced to the States along with the Great North -- but they only stuck in one of those countries. As recently as last year, ketchup chips seemed primed for an American coup, and were met with resounding silence.

So really… I'm not sure why ketchup chips aren't a thing here. Frankly, it doesn't make sense. Maybe I give my fellow Americans more credit than they/we deserve, but I like to think we are smart enough to embrace a good thing when we taste it -- especially when ketchup is involved. Now, at the end of it all, I can only do one thing: humbly request that some Canadian out there deliver me the answer: why?

Why is this all so mixed up? Why do you embrace the ketchup chip, when America snubs it's red, white, and blue-tinted nose at it all? And also -- while you are at it -- why did Derek leave without saying goodbye?

Hopefully some brave Canadian will step forward, and explain things to me. Till then, all i have is half a bag of ketchup chips, and a lifetime of futile questioning.

Alex Trebek? Are you there? Seth Rogen, can you deliver me from ketchup purgatory? David Coulier, do you have anything better to do?

And the aforementioned Drake -- surely you, the modern day ambassador to Canada, can provide me with some answers from the 6?

If not, this mystery may never be solved, and Americans may never know the delicious, ironically un-ketchupy joy of the ketchup chip.

Oh, speaking of irony, maybe Alanis Morissette can weigh in?

We'll all be waiting -- without nary a whiff of ketchup chips on our collective breath.