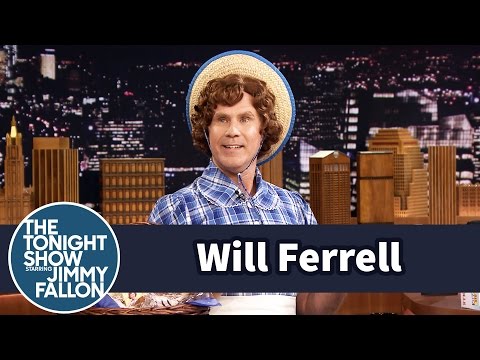 As you might've seen, Will Ferrell dropped by The Tonight Show last night in a curly wig, cowboy hat, and blue dress to announce himself as the new face of Little Debbie. This wasn't necessarily (or even a little) true, but the creators of Little Debbie snack cakes seem like they might be into it after all.

"McKee Foods was delightfully surprised by Will Ferrell's appearance," corporate communications and public relations manager Mike Gloekler told the press. "While this was not a coordinated publicity stunt, nor a paid advertisement, we appreciate both the humor of the segment and the exposure of our Little Debbie brand to Jimmy Fallon's huge national TV audience. In our opinion, Will Ferrell did justice to the cowgirl hat and the blue and white dress that are hallmarks of Little Debbie. We appreciate his enthusiasm in playing the part. We also enjoyed seeing the studio audience so eager to get their hands on our delicious snack cakes."

Sounds like Ferrell's got a job at McKee if the whole comedian thing doesn't work out, though he might want to refine his "Little Debbie cake or baked potato?" marketing stunt.

Kristin Hunt is a Food/Drink staff writer for Thrillist, and ate many oatmeal creme pies in her youth. Follow her at @kristin_hunt.