The Aaron Burr "Got Milk?" Commercial: The Craziest Ad Ever, Broken Down 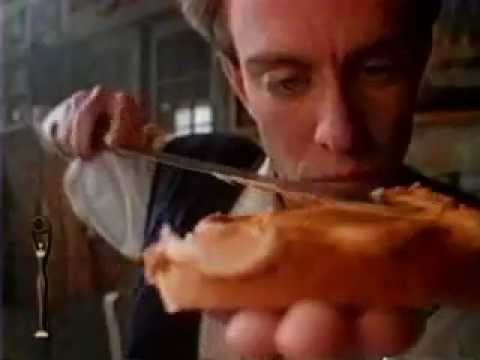 I know Aaron Burr only because a schmuck with a mouthful of peanut butter couldn't spit his name out during a commercial. But that, friends, is a successful ad, accomplishing what no social studies book could -- implanting the name of a Founding Father firmly in the brains of every TV-watching American currently over the age of 25. Who knows if it ever made people drink more milk. But the ad made such a cultural impact, it's got its own god damn Wikipedia page, and it launched a thousand milk mustache ads. It's at least worth talking about.

And in hindsight, it's way weirder than I remember. Let's examine.

This guy lives in a warehouse

Maybe it's not where he lives. But our resident cottonmouth is eating lunch in a cavernous garage that's one head in a jar shy of simulating Hannibal Lecter's storage unit. Wikipedia describes it as "a private museum filled with many artifacts," which isn't untrue. But that's like describing the people on "Hoarders" as "conservationists." There's a car parked indoors, windows that suggest this place has AT LEAST 25ft ceilings, and more Alexander Hamilton photos than you'll find in an ATM at a Bronx bodega. BTW, who determines if an ATM spits out $20s or $10s? And why don't the ATMs at strip clubs spit out singles? These are the real questions.

The light pouring in from the windows suggests it's daytime. Maybe it's a weekend. Or maybe this guy's a leech who eats government peanut butter and white bread while living in his bizarre homage to the first Secretary of the Treasury.


You've seen this actor before

If you saw Sean Whalen on the street, you'd do a double take. But you wouldn't know why. Well, you possibly saw him in Twister or his cups of coffee in Men in Black and The Cable Guy. You definitely know him from Jury Duty. Because everyone has seen Jury Duty, Paulie Shore's finest film.

Personally, I like to imagine Steve Buscemi and Sean Whalen battling it out for the "buggy-eyed, might be an alien" bit parts in the early 90s, but Sean Whalen had a mouthful of peanut butter with no milk when the Coen brothers called for a Fargo audition. Thence their paths diverged: one went on to star in "Boardwalk Empire," and the other in a DiGiorno commercial and a handful of episodes of "Lost."


He spreads peanut butter with a machete


But wait, there are TWO DIFFERENT knives

Talk about continuity issues. That original, tight shot features what appears to be a butter knife, lacking a sharp point. Scroll up and look again. The later, overhead shot features OJ's (if he did it!) murder weapon. Tsk, tsk, Mr. Script Supervisor. And Mr. Director. Which poorly segues into...

Yes, that Michael Bay. Before he went on to The Rock and Bad Boys, your favorite, blockbuster blow-em-up boss was working the small screen in commercial-land. It must have taken restraint to include that blast and not re-create the entire Burr-Hamilton duel, replete with 360-degree camera swings and Burr strolling away in slow motion as Hamilton and an entire truck filled with Roman candles exploded.

Aside: Michael Bay has never looked more punchable than in this photo.

And no, those aren't the trophies given out to the scammiest TV psychics. They're the ad industry equivalent of Academy Awards. This spot also won silver at the Cannes International Advertising Festival. Which... that's a thing. Can you imagine a film festival crowd comprising nothing but ad industry people? It'd be like mall food court workers holding their own bootleg Michelin star award ceremony.


That steam pipe would ruin everything

You don't see steam pipes in the middle of museums for a reason: temperature and humidity fluctuations are the enemies of preservation. The only thing they're really good for: making Cary Elwes make deep, painful choices with a hacksaw.

Maybe this is a 90s thing and I'm just too young to accurately recall my childhood. But to win contests, YOU had to call THEM. I know, this format hypes up the conceit of the whole commercial -- but I'm not 8 anymore. Those hosts would waste hours of airtime dialing a phone. This commercial is not set in 2015, when Mike Francesa can get away with that -- on TV, no less! But it makes no sense in 1993.


This is definitely his bedroom

Kobayashi blushes at this guy's sandwich technique. Shit, even the bear from "Man vs. Beast" would blush. Then he'd eat more hot dogs.

How did he not realize he was out of milk?

If you've ever had a roommate, you know what a milk carton containing half a gulp feels like. It's the only state roommates leave milk cartons in. And at some point, this milk carton moved from the fridge to the table, and dumbass should have felt it. Then again, that's like no. 1,327 on the list of shit that's weird about this guy's situation.


Despite its flaws, this remains one of the best ads ever

Granted, that's according to a USA Today poll taken in 2002, and people only read USA Today in airports and dentist's offices. For all that seems bizarre now that I'm 30, this memorable spot spawned countless permutations, to the point you couldn't pick up a magazine in the late 90s and early 00s without encountering some moderately famous person with a milk mustache. Chris Chandler had one. Sadly, Bobby Hebert didn't. But the gag went on for 15 years, and the Google image results are hilarious. Dennis Rodman... A-Rod in baggy jeans... Tina Wesson (who?)... talk about beating an idea into the ground. And that's before anyone even mentioned Chris Brown.

The ad is greater than the sum of its parts. And that's not a bad thing. Admittedly, the star of the commercial would be on an FBI watch list these days. But Twitter didn't exist back in 1993, and not everyone had a #hot #take. These were simpler times.

But this ad did its job, and then some. I salute you, "Got Milk?" commercial.