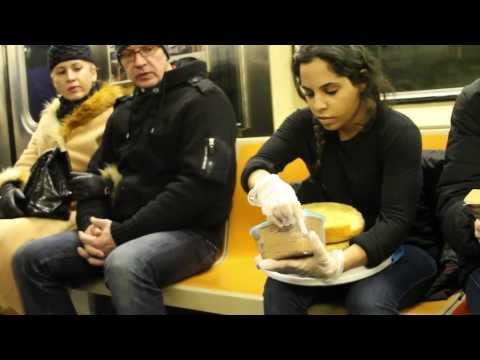 The subway is populated with some great folks, but even the dude who holds the door for you is no match for the saintly Bettina Banayan. Last week, the New York-based performance artist frosted an entire cake on the subway, and then offered it to her fellow passengers. Even more unbelievably, people gobbled those slices up. Banayan said she was trying to foster a sense of community among impersonal New Yorkers. From the looks of this video, she nailed it for a solid 10mins. LaBeouf, take note: This is the kind of performance art people actually want.

Kristin Hunt is a food/drink staff writer for Thrillist. Before that, she ran a massive Dunk-a-roo cartel out of her college dorm room until the game got too rough. Follow her at @kristin_hunt.