Everything you never wanted to know about prison food

We've already perfected our signature prison wine, so it's time to move onto the main course: jail cuisine. It's acquired a reputation for being exceptionally nasty, but is that cred -- like White Power Bill's -- actually earned?

As it turns out, prison food is pretty gross. But there's plenty of interesting backstory to it, aside from its dank smells. We're guessing it'll come in handy once your checkered past of stealing gum on dares catches up to you.

A hunger strike sounds like a good idea
Glancing over one of the Federal Bureau of Prisons' 2012 menus, the food actually sounds pretty decent. But apparently the real deal isn't up to snuff. A blog written by Stateville Correctional Center inmate Paul Modrowski contains this glowing recommendation for the meatballs: "I joke to my cellmate that they taste like an entire groundhog was put through a wood chipper, and with the help of some soy emulsifier, made into meatballs."

Sunday brunch ain't what it used to be
But it's not the mimosa-pounding experience you're imagining. Budget cuts have slashed several state prisons' servings from three full meals to two. Last year, Illinois took a cue from Ohio and Georgia and merged breakfast and lunch to "brunch" on weekends and holidays. Similarly, Texas axed lunch in 2011, along with last meals for death row.

Go kosher
You might assume jails leave convicts with religious dietary restrictions to fend for themselves, but the Federal Bureau of Prisons (called BOP, because TIGER BEAT was taken) keeps a detailed checklist of specifications for kosher foods. Everything from mixed veggie percentages to non-metallic packaging gets covered on the BOP guideline, and apparently the extra effort pays off. The kosher stuff is so highly regarded in some prisons that Gentile inmates try to fake their way into the program!

The food used to be good
At least in the 1940s in that floating palace we call Alcatraz. The San Francisco Chronicle got its hands on a vintage menu from '46, and it includes some pretty fancy options. This relic supports many modern prisoners' complaints that food was way better in the past, though we also don't have any postwar Tumblrs to back up the quality of the Beef Pot Pie Anglaise.

Commissary food is king
Inmates turned off by the groundhog meatballs go to the commissary, which is basically the jail's general store. (Peep the Federal Bureau of Prisons sample list.) And you can use that food to trade for other food, like a grown-up version of trading snacks at the lunch table in 5th grade. To wit, Modrowski writes, "The last time [we] purchased commissary, I bought my cellmate 20 [ramen] in exchange for a jar of peanut butter and 3 bags of instant brown rice."

Who's in the mood for a prison latte?
Not everyone can be the Martha Stewart of prison (mainly because Martha Stewart was the Martha Stewart of prison), but convicts do conduct fascinating kitchen experiments. One common meal is the "spread", which consists of a base of ramen with basically anything (meat, potato chips, etc.) mixed in. For a taste of Starbucks behind bars, the pros suggestrunning a carton of milk under hot water until it's steamy, then adding three spoonfuls of instant coffee and a maple syrup packet from breakfast. Boom: prison latte.

A taste of home for the holidays
Not every institution serves holiday dinners, but based on accounts from the cooks at the Oklahoma State Penitentiary, Eastern Oregon Correctional Institution, and more, Thanksgiving meals can actually be solid. The roster might include turkey, gravy, mashed potatoes, cranberry sauce, and even pumpkin pie.

Some Christmas dinners skew similarly to Thanksgiving with turkey and gravy, though one man claims he got Cornish Game Hen! Goodie bags are also handed out in some jails, and they frequently include cookies and candy, while according to Mr. Cornish Game Hen himself, some lucky prisoners get cartons of eggnog in the haul. 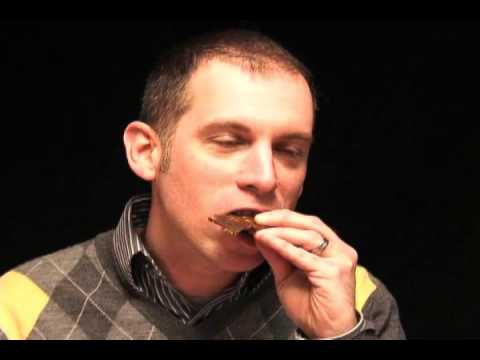 The Nutraloaf is very real and horrifying
Along with sending the neo-Nazis from Oz to terrorize you, prisons have another disciplinary horror at their disposal: Nutraloaf. It was once described by Chicago Magazine food critic Jeff Ruby as "a thick orange lump of spite with the density and taste of a dumbbell, [that] could only be the object of Beelzebub’s culinary desires", so it's got that going for it, which is nice.

Basically the Nutraloaf is an unseasoned brick of things like carrots, cabbage, beans, and tomato paste. Get rowdy, and you could be fed this monstrosity for days. Prisoners have tried to get the Nutraloaf branded cruel and unusual punishment, but an appellate court in Illinois shot them down, writing that the Eighth Amendment does not provide for "tasty or aesthetically pleasing" foods. Watch some Glens Falls Post-Star staffers sample the stuff above, and then never so much as jaywalk ever again.

Kristin Hunt is a food/drink staff writer for Thrillist. She has never been to prison, but she has seen Orange Is the New Black, so same difference. Follow her at @kristin_hunt.