Inside Fife and Drum, the Restaurant Run by Inmates Inside a Jail

Some restaurants ask you to put on a sports coat before they let you in. Hip ones might even ask you for a password. But only at Fife and Drum do you have to clear Massachusetts Department of Correction security.

For over 30 years, Fife and Drum has given inmates at the Northeastern Correctional Center the opportunity to hone their cooking chops at a restaurant located right on the jail's grounds. There, prisoners can serve as cooks, bakers, dishwashers, and even waiters to hungry locals. It's all part of the center's culinary arts program, which aims to prep students for real kitchen jobs after their release.

Situated on a huge tract of farmland in Concord, Massachusetts, the Northeastern Correctional Center is an all-male prison which hosts inmates with two levels of security: minimum and pre-release. (That means the men either pose as much threat as Piper Kerman or are transitioning from incarceration to the real world.) While some of the guys are sent to clean the streets with the community work crew and others train service dogs, a select few -- who apply through the educational program -- get to work at Fife and Drum.

The same team of 11-13 men works the restaurant for year-long stretches, although job assignments switch every five weeks. The knives might need to be chained to the prep stations, but otherwise, it's nearly identical to any restaurant kitchen. Each inmate is supervised and trained by Eddie Jacobs, an American Culinary Federation-certified instructor who's been working in correctional centers for nearly two decades.

"I had my own business, my own restaurant," Jacobs said. "I sold it. I wanted to teach. So I started taking the courses offered by the Commonwealth to be a licensed teacher. And then this job came up in Corrections. I got it, and I’ve been here ever since." 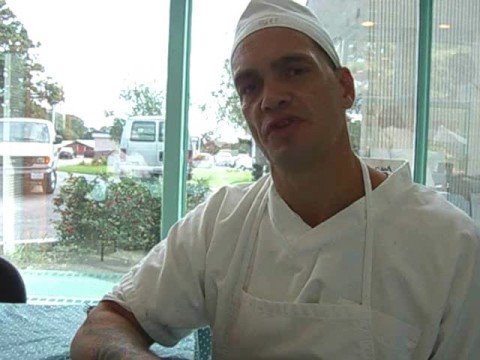 Fife and Drum has been chugging along since 1979, when the center noticed a tech school running a similar program and copied its moves. They must've worked out the kinks almost instantly, because as Darren Duarte, director of public affairs for the Massachusetts Department of Correction, tells it, the restaurant today still largely resembles the OG iteration. "It's pretty much the same since the '70s," Duarte says. "There have been no structural changes or renovations. The cost per meal has changed, but that's to be expected."

Still, most diners would consider Fife and Drum's lunch prices a steal. For just $3.21, customers can sample the rare prix fixe that won't bust your bank account. The May 29th menu Jacobs provided boasted clam chowder, garden or Caesar salads, chicken gyros, grilled ham and cheese sandwiches, clam rolls, and a Greek salad with chicken kebabs, if you were after the healthy option. If you weren't, they also had peanut butter brownies, chocolate parfait, and chocolate chip cookies for dessert.

So what kind of people are cashing in on this crazy-cheap, crazy-unique dining experience? Octogenarians, apparently. "A lot of elderly come in. Retirees, neighbors," Duarte says. "A lot of times, they’re the ones that have the time to go over there! It’s not necessarily the same people every time, although we do have a group like that." The graying crowd is particularly taken with the barbecue and Chinese food, and not afraid to share some thoughts with the Internet: Fife and Drum has its own Yelp and Urbanspoon pages, as well as a Chowhound thread.

As far as the program's success goes, Duarte says several alum have gone on to real restaurant jobs after serving their sentences. And while he declined to go into any particulars, he did reveal that one of Fife and Drum's own is currently at the Food Network. ("When he got here, he couldn't hold a knife," Jacobs adds.) This reminds us: Food Network execs, if you're reading this, we'd sincerely like to see a pruno challenge on Iron Chef. Our expert is available for consultation.

Kristin Hunt is a Food/Drink staff writer for Thrillist, and absolutely plans to eat at Fife and Drum the next time she's in MA. Follow her to prison gourmet at @kristin_hunt.