When Is It OK to Stiff a Restaurant Server?

“Is it ever OK not to tip your server?”

This question has been asked over and over on the internet, and everyone has a different answer. That’s all crap, though, because there’s one correct answer: Yes, on rare occasions, it is OK not to tip your server.

If you’re about to launch into some self-righteous, performative bullshit about how it’s never OK to stiff a server, regardless of circumstances, you can stop now. They are few and far between, and they require some pretty extreme scenarios, but they absolutely do exist. To help you determine which instances this would apply to, here are some common (and not as common) scenarios and whether you should or should not tip if they happen:

There was a mix-up in your order

I don’t have enough “screw yous” for people who screw their servers out of their tip because something went wrong in the ordering process. Did the server fix it when the issue was pointed out? Because that’s all that’s really relevant here.

The server spilled something in your hair or on your person 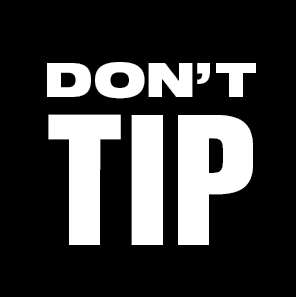 Accidents happen, but at this particular point, any decent server is going to know they’ve forfeited their tip and be OK with it. When I worked at Applebee’s in college (yes, I was once an Applebuddy, and I swear to Odin that was what they called us), I spilled a ramekin of blue cheese IN a girl’s hair. She still tipped me, but holy crap, she really did not have to. I was just gonna take the L on that one and I was fine with it. If you have ranch in your ear canal, tipping the person who did it to you should be the least of your concerns.

The server spilled water near your table

Again, accidents happen, only this time it didn’t happen ON you, so what the hell are you even complaining about? You're not the one stuck lugging a mop around a busy restaurant. Enjoy the free athletic prop comedy water show, shut up, and tip normally.

Nothing makes this OK, and if your server is dropping racial slurs and/or is making some crack about your weight, fuck them. This should be an automatic no-tip, regardless of circumstance. For anyone saying, “hey, but servers need to eat, too”: people who use racial slurs don’t deserve to eat.

The server made a dumb dad pun that, while not offensive, did not make you laugh

If the comment the server made wasn’t actually offensive and was the sort of joke your 65-year-old dad would tell if he were capable of telling a joke in under eight minutes (hi Dad!), then no, they shouldn’t be monetarily punished for this. Of course they shouldn’t be. What’s wrong with you for even asking, theoretical person I’m now berating due to my own deep-seated anger issues?

Of course the server didn’t want to be serving you: NO server wants to be serving you or anyone else, ever, in any scenario. Your server would literally rather be anywhere else in the world than doing this stupid, horrible job right now. If you even slightly reduce the tip amount based not on the actual job the server does but how much they smile while doing it, you’re the asshole, not them.

This one’s a little more difficult to quantify, because it has to be very cut and dry that the server just didn’t give a shit about your physical well-being because they assumed your allergy wasn’t real. If the dangerous thing is in your food despite requests that it not be there, and when it’s pointed out to the server they react by saying, “Oh no, I’m so sorry, let me get that taken care of for you,” then no, they still deserve the full tip. If instead they roll their eyes, screw them.

In a perfect world, this probably shouldn’t happen. But we don't live in a perfect world, do we? In the real world, maybe don’t spend 45 minutes gently picking over your side Caesar, KAREN. This is on you, so deal with it.

The server threatened your physical well-being

Not only do you not have to tip a server that does this, you really should alert the damn manager that they’re employing an unhinged person. Also, flee the building while the server is in the back talking to them, because he’s 100% going to slash your tires if he knows you did this.

Other tables that got there after you got their food first

Ninety-five percent of the time when this happens it’s because the angry first-sat customers are too stupid to have any concept of how food preparation and/or basic temporal mechanics work. Hey, maybe they got their food first because they ordered a house salad and you ordered a well-done rib-eye, you horrible taste bud-having jack knuckle. Do you even understand the nature of linear time? Of course you should still tip.

Speaking only for myself, I would still probably tip 20% here, but I’m also a dude, and it would be WAY creepier if I was a woman and my male server was getting all up in my business. This one probably depends on a case-by-case ruling as far as how much of the tip they shouldn’t get, but at the very least, this is wildly not OK and should cost the server portions of their tip.

OK, if you’re going to say this or “fa-jai-ta” or “tay-co” or some dumb crap like that, frankly, you deserve for the entire universe to point and laugh at you. This isn’t your server’s fault: It’s yours. And honestly, you should be laughing at yourself along with everybody else.

The server asked "who had what?" when they brought the food instead of just setting it down in front of the correct people

Let me ask you: Are you in a five-star restaurant, or are you in the California Pizza Kitchen at the mall sandwiched between a Uniqlo and the ruined husk of what was once a Borders? Listen, Thurston Howell III, you’re not so important that your server, who probably already has six other tables, is required to remember this perfectly without having to ask. Get the hell over yourself.

C.A. Pinkham is a former server who somehow fell ass-backwards into this whole getting paid to make words good thing. He will blog for and about food.