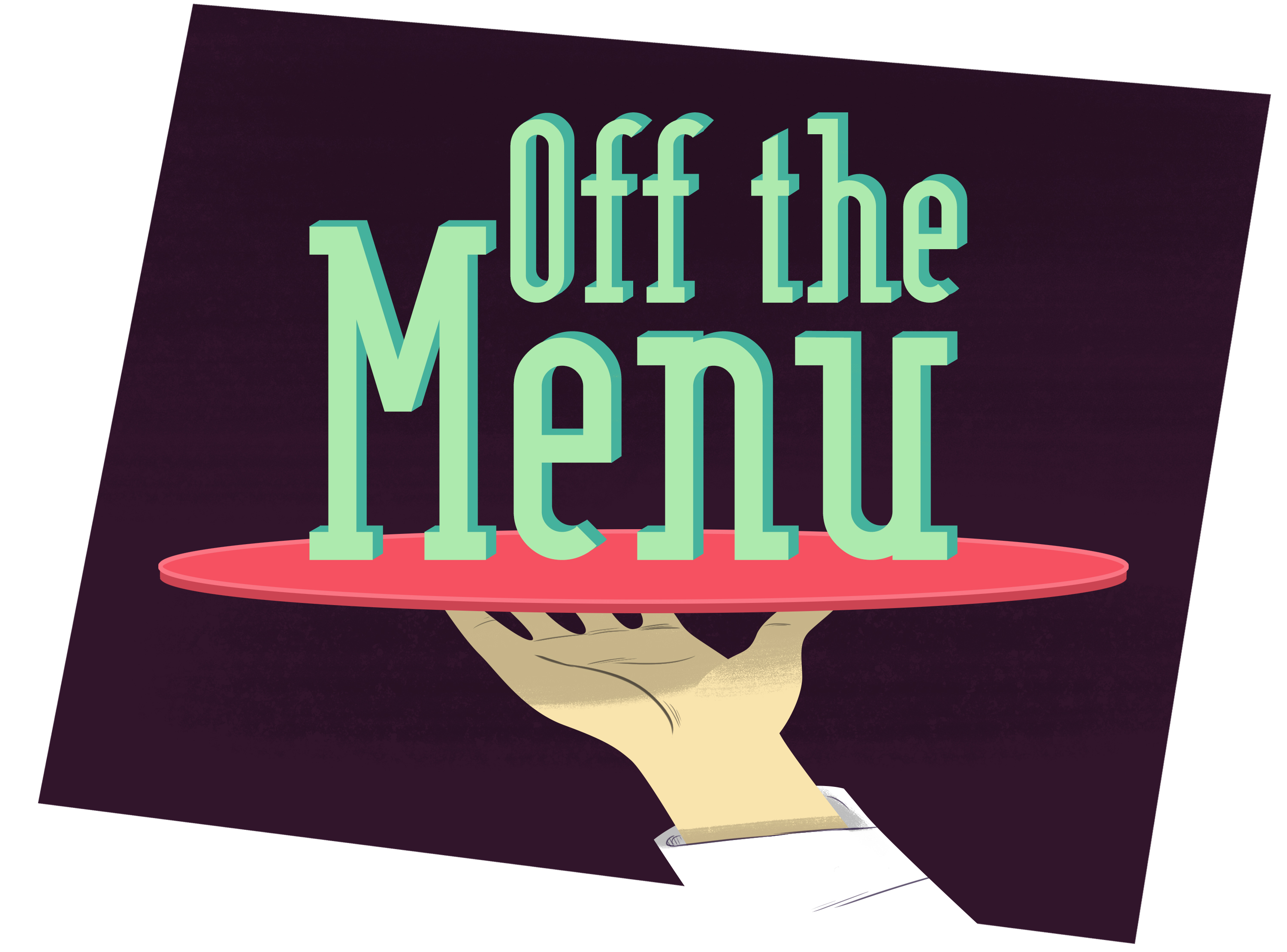 Welcome back to Off the Menu, where we bring you the best and strangest food stories from my email inbox. This week, we have more stories of customers who really, really were not supposed to eat that. As always, these are real emails from real readers, though names have been changed.

"During a very dark period in my life, I worked as a cashier/chef/server/gopher at Freshii, a popular 'healthy choice' fusion cuisine quick-service joint.

"If you're not familiar with Freshii, the idea is that there are pre-designed menu items (salads, bowls, soups, wraps, and burritos) and there are design-your-own options as well, so you can pick your base (rice or quinoa, greens of various kinds) and then add proteins like steak, chicken, shrimp, and tofu, plus cheese and other toppings. 'Premium' items like proteins and cheeses cost more. Most people would get a salad with, like, spinach, the included four toppings, maybe some feta and/or chicken. This generally came to around $8-$12, depending on if you got the premium stuff like protein or cheese.

"But one day Salad Man arrived. He filled out a design-your-own sheet, and just about every checkbox on the sheet was ticked. He wanted a mixed greens base, eight different vegetable toppings, a double portion of every kind of cheese (a portion was 1/8 cup; we had Jack and cheddar, feta, goat cheese, and blue cheese), and a double portion of every protein (chicken, tofu, steak, and shrimp; again, one portion was 1/8 cup). Then he wanted both ranch dressing and 'Buffalo sauce' (which was actually just Frank's Red that we dumped into other bottles). And he wanted it tossed.

"Tossing a salad at Freshii meant putting all the ingredients into a plastic bag, tying air into it, and shaking. Bag explosions happened occasionally, especially if hot rice or quinoa was involved. The result was a nice evenly mixed salad or bowl, but when you had that many ingredients the bag was heavy and there wasn't really enough room in it for the air.

"So I tried to shake this thing, but ended up just kind of flopping around this bag of cheese, meat, and drenched greens. I plated it into the plastic to-go box and had to struggle to get the lid on. Finally I managed and rang the thing up for him.

How did he pack it all in?!

"During the summer I work in a food truck in Montreal. We're usually parked at all the popular festivals, but by far my favorite is the weekly electronic rave located on an island in the middle of the St. Lawrence River. It's loud and fun. We trade our gourmet sandwiches for booze with the local bartenders AND we tend to be tipped well since people are too stoned to count money.

"One of these customers sums all of them up. I was sitting calmly in the server window when this stick-thin 20-something guy came up to me and said, 'I'm too high to read the menu, can you read it out to me?'

"I winked and nodded -- it was only 5pm, so it was not too busy, plus he was really nice about it, so why not? As I proceeded to read out our seven-item menu, he 'oohed' and 'aahed' as if I were juggling knives. When I finished, I asked what he'd like, and he responded with the most contented smile, saying, 'Everything sounds delicious! I'll have it all!'

"I chuckled out loud, doubting he'd find his way to the front where the cashier was, but I pointed him in that direction, definitely not expecting a seven-sandwich-long order.

"Thirty seconds later, he paid for seven sandwiches at $10 a pop and left a $10 tip. We made them in two minutes (it's a food truck, we're meant to be fast) and handed the order over to him. He was so happy to get them he left ANOTHER $10 tip and scampered away with his box to sit down a little further off in the grass, presumably to share his bounty with his friends.

"But no, the kid continues to eat all the sandwiches, one by one, on his own over the course of an hour.

"I'm still wondering how he was able fit that much food in his 120lb frame and not pass out and roll off and drown in the river." -- Sasha Carter

"I was working pantry in a fine-dining restaurant where we had a dessert tray for presentation purposes. One of the items on it was a bread pudding with vanilla-flecked ice cream -- the ice cream being represented by a carefully crafted scoop of lard with table pepper.

"One night, a server returned the tray and said the fake ice cream needed replacing. During the presentation, some rube had exclaimed how great it looked and dug his spoon into the faux-ice cream and shoved it into his mouth before she could say anything. He had then pronounced it to be horrible and put it on his bread plate." -- Barry Harmon

"I worked at a small-town diner for a few years in my early 20s. We had a lot of weird regulars, but this one lady stands out.

"My co-worker and I noticed when she and her husband started coming in because they were new people, and also a good 30 years younger than the median age of our regular clientele. Turned out they were new in town, and my co-worker -- always better at small talk than me -- developed a bit of a rapport. Her husband ordered his food pretty straight-up, no modifications or special requests or anything; eggs and sausage, if I remember correctly. She always got two pancakes, lightly done.

"For the first month or so, this is good enough, until one day, when the rotation assigns their table to me. They place their standard orders and I bring them their food. Her pancakes are nice and light, tinted just enough to show that they've been cooked.

"I check on them after a few minutes, and while her husband is digging in, her pancakes are barely touched. 'Everything OK over here?' I ask.

"'I'm great,' the husband assures me. But the wife looks at me a little sadly.

"'These pancakes are too well-done,' she informs me apologetically.

"'Oh, I'm sorry about that. I'll have the cook remake them,' I offer, and she's happy to let me send back her food.

"Being a weekend morning, it's a little busy, so the cook on for the day -- a middle-aged ex-Marine gone to seed with more hair on his shoulders than on his head -- is a little grumpy to see me bringing back a plate. I set it on the food window and inform him that they are too well-done for the lady.

"He looks at the beige pancakes, waits a beat for the joke, but then barely suppresses an eye-roll and begins to remake them. In a few short moments, he sends up another plate of pancakes, these the same color as the batter.

"I bring the pancakes to the lady and hand them back. She thanks me excitedly and begins to dig in.

"I check my other tables. When I circle back around, I see that, again, her pancakes are basically untouched.

"I know I must've looked surprised, because she was pretty apologetic again. 'They're still too well-done,' she tells me.

"I'm beginning to get a little annoyed because I don't think we've ever served a lighter plate of pancakes, but I apologize again and send them back to the cook, whose eye starts twitching as soon as I set down the plate. 'They're still too dark.'

"He picks up a pancake and slaps it back down. 'Tell her if they're any lighter, they'll be raw in the middle,' he growls in exasperation.

"I head back to the table and tell her, 'The cook says that's as light as he can make them. They're only barely cooked through, and if they're any lighter, they'll be raw in the middle.'

"The cook is looking at me expectantly when I come back, and I tell him, a little unnerved, 'She wants them raw in the middle.'

"He blinks, shrugs, and less than a minute later, there are two pancakes, barely solid, on a plate for her. She devours the goop happily while her husband, who had already finished his food, watches fondly, shaking his head a little at her strangeness.

"After that, it was a matter of seeing how raw the cooks could make them every time she came in. We'd send back her order with 'RAW' in all caps and underlined. She was thrilled, her husband just laughed at her, and we servers tried to keep from throwing up in our mouths as we watched. But hey, at least she was nice." [Editor’s Note: Well, fair’s fair -- pancake batter does always taste better than the disappointment of actual pancakes, which are bad.] -- Melanie Korver

Do you have a restaurant, home-cooking, or any other food-adjacent story you’d like to see appear in Off the Menu (on ANY subject, not just this one)? Please email WilyUbertrout@gmail.com with "Off the Menu" in the subject line (or you can find me on Twitter @EyePatchGuy). Submissions are always welcome! Also, we are now requesting submissions for holiday-themed stories, so if you have any stories pertaining to Thanksgiving and Christmas, please send them in!

C.A. Pinkham is a guy who makes inappropriate jokes about Toblerones on the internet. Follow him on Twitter @EyePatchGuy.
Our Newsletter