Drug dealers are jerks, sure, but the snacking companies might be the most nefarious of all. Who else would get us hooked on delicious O'Boisies, or succulent Eagle Nacho Cheese Chips and then suddenly -- without warning, recourse, or logic -- take them away from us, leaving us shaking and sweating for a snack fix we'll never again taste, except in our dreams? Here, then, are nine of your favorite snacks you'll never get to eat again... so start stockpiling your bags of Munchies immediately.

WOW Chips
"Wow," everybody said when Lays introduced totally fat-free Doritos, Ruffles, and other chips featuring a magical fat-substitute called Olestra. Then they were like, "WOW, these taste pretty good." Then, "WOW! WOWWY WOWWY WOW, do I need to go to the bathroom... for an hour or so," followed by, "WOW, I really should have read the warning on the bag saying I might get 'loose stools'." And finally: "WOW, those disappeared off the shelf pretty fast."

Crunch Tators
At $.69 a pop, these Frito-Lays snacks could have tasted like chalk and still been popular. As it were, they were extra-crunchy, extra-spicy chips that came in flavors like Mighty Mesquite & Hoppin' Jalapeno, and were a favorite of Kevin from Home Alone before being pulled from the market. No, we haven't had enough, Kevin, and we ARE thirsty for more.

Eagle Brand Snacks
Anheuser-Busch had a brilliant idea... since people really love the beer/salty snacks pairing, why not cut out the middle man? And so launched the Eagle brand, which specialized in cheesy popcorn, onion poppers, pretzels, and perhaps the only nacho-cheese chip ever to rival Doritos. Then suddenly, in the early '90s, they discontinued the addictive brand... which drove people to drinking more. So well played, Anheuser-Busch. Well played indeed. 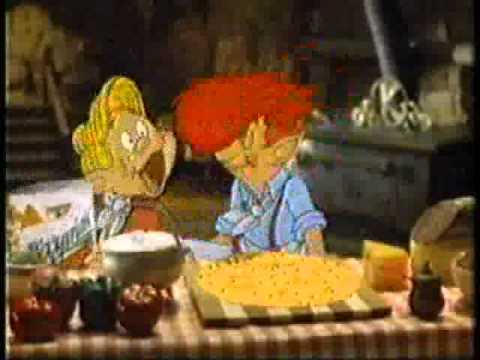 Pizzarias
What do the kids like? Duh: they like guitar solos, weird slang, and pizza snacks that don't taste at all like pizza but are nonetheless delicious. Also, according to this commercial, they also really, really like marijuana. By all accounts, they still like all these things, which makes their disappearance baffling. Perhaps this was an unforeseen casualty of the War on Drugs. Or, you know, the fact that they were kinda gross.

Planter's Cheez BallsMr. Peanut, in an effort to stop the racial stereotype that monocled talking nuts couldn't aspire beyond the status of nut salesman, struck gold with these awesome, baked cornballs with an amazing fake-cheddar bite. But then that gold turned to faux-gold, people lost interest, and he had to get rid of his balls and stick to nuts, thus ending an era of cardboard canned snacking. But not all hope is lost, as you can still totally join this campaign to resurrect them.

Quackers Crackers
How can you go wrong with something that tastes a lot like a Goldfish, but is shaped like a totally different animal with aquatic tendencies? Oh, right... the whole ripping off a well-established brand that's totally better thing. That'll do it.

Tato Skins
Elves possess a remarkable frugality, it appears... as evidenced by Keebler's addictive treat, potato skins. Yes, they managed to make something usually thrown in the trash delicious... though most anything tastes pretty good when covered in bacon salt or steak seasoning. TGI Fridays -- God bless them -- took to the Tato Skin game shortly after Keebler's disappeared, but it's just not the same without that elven magic.

Doritos 3Ds & Others
Doritos are perfect, but that didn't stop the mad scientists at Frito-Lay from messing with the magic formula. And so, we briefly had Doritos 3D, which tasted more like Bugles than Doritos and were shaped like little corn pyramids. Perhaps even more amazing -- and thus more amazingly tragic in its absence -- was the brief life of the Cheeto Dorito, a hybrid masterpiece of dusted Doritos w/ Cheeto powder that appeared in the late '80s or early '90s, disappeared quickly, and is barely documented today.

O'Boisies
The disappearance of O'Boisies was perhaps the most tragic of all, if only because we're no longer privy to the chip's delightfully whimsical jingle. A greasy predecessor to the Popchip, these suckers were full of crisp, little bubbles that added a crazy crunch and were covered with enough salt to kill a deer. They were, to say the least, O'Boisterous. Whatever the hell that means.