10 Things You Didn't Know About Doritos

You probably can't remember a time when neon-orange Doritos dust didn't coat your digits. But the cheesy tortilla chips didn't come into our lives until 1966, thanks to a series of (for once, great) accidents at Disneyland. There's also a space transmission and campaign ethics inquiry involved in Doritos' history, which we detail below. The bio might not be up to David McCullough standards, but we promise it has way more MSG than John Adams.

1. It all started in Disneyland

Frito-Lay used to have its own Tex-Mex restaurant in Frontierland called Casa de Fritos. The place was insanely popular when it opened in the '50s, but the requisite Frito pies weren't the star of the show. Customers clamored for an item that wasn't even technically produced by Frito-Lay: tortilla chips. See, Frito-Lay contracted the taco shells and tortillas from Alex Foods Co. and one savvy route salesman had suggested the cook turn the reject tortillas into chips rather than chuck 'em. The cook did just that, and Frito-Lay didn't fully realize what was going on until marketing VP Arch West swung by on a family vacation and spotted the chips. He begged the contractors to mass-produce the things and pitched a plan to his bosses, who were very into the whole scheme.

2. West was a traveling cheese salesman before that

3. His grave was dusted with Doritos

The West clan had everyone throw a chip on Arch's grave when he passed in 2011. It's not quite as extreme as being buried in a Pringles can, but the sentiment's still there.

4. They're scientifically engineered to make you crave them

Seriously, it's chemistry! As a food scientist explained in 2013, Doritos' appeal is multifold. First, there's the high concentration of fat -- when fatty snacks melt in your mouth, your brain thinks the calories have disappeared too, which delays feelings of fullness. Then there's the dust, which unleashes an intense flavor burst when you lick it off your fingers. You also can't forget the MSG, which enhances just about anything, and, well, there's like six more reasons, so go read them here.

Any US citizen over the age of 2 knows what ranch dressing is, but many Europeans missed that memo. And so, when Cool Ranch makes its way overseas, it's labelled "Cool American" in several countries (including Holland, The Netherlands, and Iceland). Meanwhile, the UK calls it "Cool Original," because they just couldn't let us have this one thing. 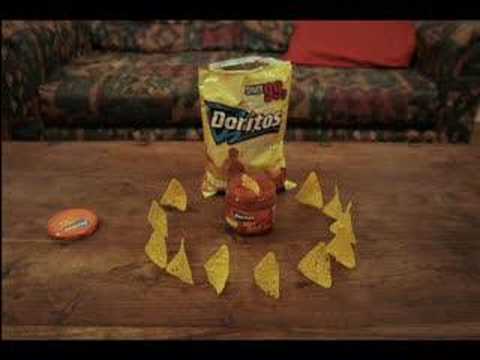 6. This Doritos ad went to space

A historic fan of crowd-sourced commercials, Doritos called on the British public to make an ad for them in 2008. But not just any ad. An ad that would go to space. After this video was chosen as the winner, Doritos enlisted scientists to pulse the message out over six hours from radars at the EISCAT space station in the Arctic Circle. We never received word back from the aliens, so we have to assume they're strict Bugles loyalists. 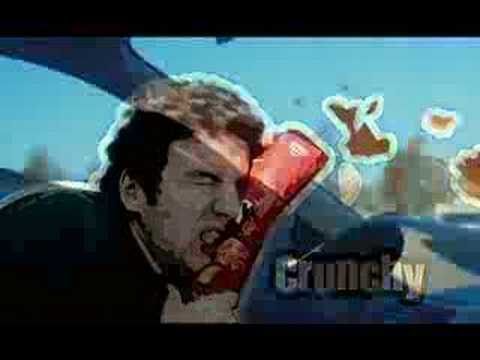 7. Their Crash the Super Bowl ads have drastically increased incentive

When Doritos first called on fans to make a game-day commercial, the prize was $10,000 and a trip to the main event. (Here's the video that won.) This year, Scott Zabielski got $1 million and a contract job with Universal Pictures for his "Middle Seat" spot. Somewhere, that '07 victor is crying softly into a bag of Nacho Cheese.

8. They're a big player in the junk-food gourmet scene

This right here is a Doritos kimchi carbonara, and it's just one example of the snack's grown-up applications. You can also turn the stuff into a mean 'viche or a series of breathtaking small plates that also feature Red Bull foam and "string cheese tied into tiny knots."

As a tribute to Arch West, the New York Times put together a collection of Doritos name-checks in fiction. The snacks are clearly a unifier -- authors ranging from Stephen King to Joyce Carol Oates mention them in their stories. So don't be surprised when Franzen drops an esoteric DLT passage in his next novel.

10. The chips provoked a serious discussion on campaign ethics

It was pretty hard to take Stephen Colbert's 2008 presidential campaign seriously, but alarmingly, a lot of people did. And the thing that really sent officials into a tizzy was Colbert's "corporate sponsor," Doritos. Federal laws explicitly ban corporations from making campaign contributions, so critics were not okay with Colbert calling his run the "Hail to the Cheese Stephen Colbert’s Nacho Cheese Doritos 2008 Presidential Campaign," despite the fact that Doritos didn't actually pay him to do any of that. John Edwards even accused Stephen of being "stained by corporate corruption and nacho cheese." Colbert was eventually shut down by the South Carolina Democratic Party executive council, denying us the most satirical presidential run in US history, but sparing us any more John Edwards comedy.

Kristin Hunt is a staff writer for Thrillist, and is now packing up everything to hit the road as a traveling cheese salesman. Follow her door-to-door at @kristin_hunt.