10 Things You Didn't Know About Fuddruckers

In 1979, Queen was releasing "Don't Stop Me Now," Jimmy Carter was being attacked by a swamp rabbit, and Philip J. Romano was scheming up his burger baby, Fuddruckers. The San Antonio restaurant has since expanded into an international chain with a special place in many millennials' cheese-clogged hearts. But they probably don't know about Romano's important contributions to heart surgery, or his sweet karate moves. There's also some interesting stuff on the chain's apparent paranormal activity, which we've compiled for you here. Enjoy it over one of Fuddruckers' fancy elk burgers.

1. The name was inspired by a fake airline

Although Philip J. Romano called his place "Freddie Fuddruckers" when it first opened in 1979, the name wasn't inspired by a dear, eccentric friend. It was actually a riff on Fudpucker Airlines, a made-up company that aviation nerds have been joking about for years. Ask your buddy who swears he's getting his pilot license every single year about it.

2. Romano gave up his karate schools to become a restaurateur

Phil first got into the restaurant game by partnering with the father of one of his karate students on a North Palm Beach eatery. Because yes, at that point, Romano was running two karate schools. But in order to commit himself fully to the restaurant venture, he had to sell them off. Romano estimates they were making about $20,000 annually, but considering the multiple food empires he'd establish, it was probably the right call...
Thrillist TV
Wine and CheeseburgerS1 E5
Wine and Cheeseburger: Harley and Lara Pair Falafel with Wine

Other than Fuddruckers, Phil's most famous venture is Romano's Macaroni Grill -- which, we're sorry to report, isn't named after the star of the comedy classic Welcome to Mooseport. He launched the Italian chain in 1988 after leaving his position as director of Fuddruckers (he'd already stepped down as chairman and chief executive years earlier). He claimed at the time he remained a "friend of the company," but Fuddruckers still throws him the stink eye at parties to this day.

Nowadays, burger joints are an increasing arms race to gather the most exciting non-beef patty options. But before the mad dash for kangaroo sliders began, Fuddruckers announced "Fudd's Exotics." The 2010 program added elk, wild boar, and buffalo burgers to the menu. Though they're subject to individual restaurant availability and "local taste preferences," the Fudd's Exotics are all still available to this day. The image of an Elmer Fudd-owned strip club is still (unfortunately) glued to our brains. 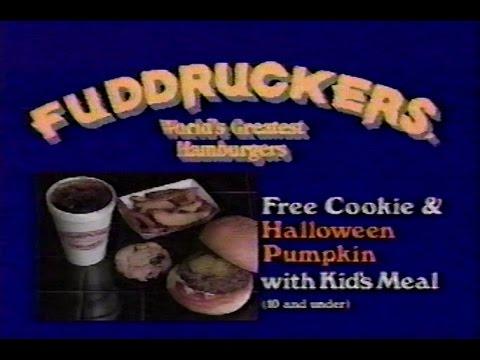 7. It's got the best food around and rad video games

8. The one in Modesto is supposedly haunted

Like some paranormal terror with your burger? Then check out the Fuddruckers in Modesto, California. It's supposedly haunted by the ghost of a skater kid who broke his neck there in the '80s (when the lot was a skate park). While he was apparently more active at the Blockbuster that occupied the space before Fuddruckers -- likely due to it having multiple copies of Thrashin' -- he's known to mess with lights, doors, and sound systems.

Considering the international posts it's got in Canada, Panama, Chile, Italy, Mexico, the Dominican Republic, and UAE, Fuddruckers is practically a US ambassador. All that's missing is a kiosk in the UN building.

Kristin Hunt is a Food/Drink staff writer for Thrillist, and thinks you're ruining Fuddruckers for everyone, Troy. Follow her at @kristin_hunt.