Things You Didn't Know About Cheetos

Everyone knows what it's like to have their paws covered in Cheetos dust, but for most people the history behind the snack is as ambiguous as the ingredient list. With that in mind, we've compiled a list of 16 factlets that you can think about while you lick your fingers clean after your next bag of Flamin' Hots.

Flamin' Hot Cheetos were invented by a janitor

As revealed in an inspiring story reported by the Kansas City Star, what began as a spicy hack by a Frito-Lay plant worker has now become one of Frito-Lay's best-selling products. Janitor Richard Montañez talked his way into a meeting with the company's CEO, and armed with just a sample bag and a few nights of marketing studying, put on such an impressive presentation that it vaulted him up the corporate ladder into an executive vice president position.

This stat comes straight from Kimberly Scott, the director of communications at PepsiCo, Inc./Frito-Lay North America: a year-long production run requires 11 million gallons of milk, which translates to 10 million pounds of cheddar cheese that's then used in the Cheetos seasoning. That averages out to an astonishing 2,200 gallons of milk per cow.

Cheetos are intimately linked to the US military

Hot on the heels of his purchase of the Frito recipe for $100 in 1932 and a successful expansion to five manufacturing plants, Frito company founder C.E. Doolin's next move was to adapt a dairy preservative technique to bring cheese into the world of dried snacks. According to WIRED, Doolin's business acumen wasn't the only reason behind his success: he also owes thanks to the US military, which pioneered research into cheese dehydration to better feed the troops.

Cheetos are produced in 22 countries and come in 50 flavors

The original mascot was a mouse

Before Chester's slick Wayfarers and ferocious snacking appetite became a worldwide marketing campaign, the chip was represented in commercials by a much more demure mascot: a simple, unnamed mouse.

The cheese seasoning has a stupid number of ingredients

The "enriched cornmeal" that's heated and fried to form the base of the Cheeto is then blasted in a complicated cheese seasoning that's not dissimilar to the stuff that comes in the Kraft macaroni and cheese flavor packet. It's comprised of over 12 different ingredients including whey, yellow 6, more enriched cornmeal, vegetable oil, vitamin B, sugar, salt, and MSG. Check out our in-depth snack composition analysis right here to better understand the role of each of these ingredients.

Cheetos are scientifically designed to be addictive

Cheetos' airy texture melts in such a way that it actually fools the synapses in the brain so that they don't realize calories are being consumed. But Cheetos aren't the only food that's engineered to fool the pleasure receptors: Oreos, McDonald's, and Coca-Cola all use similar tricks.

There are a ton of weird discontinued flavors

Mental Floss dug into the wacky world of failed Cheetos flavors, explaining the stories behind everything from Paws -- which only lasted three years -- to X's and O's -- which has a Facebook group pleading for its comeback -- to Cheezy Pizza Puffs, which took the nation by storm in 2001 and quietly faded away in 2006.

Each bag has more Cheetos than the serving size claims

The label on a large bag of crunchy Cheetos lists the contents at 189 chips, but thanks to meticulous investigation it's been proven that a bag actually contains 237.5, meaning Chester is a very generous cat indeed.

By offering reduced-fat and whole-grain-rich versions of its Flamin' Hots. Apparently kids (and regulators) couldn't tell the difference.

Tongues rolled in 2001 when Cheetos debuted a snack purposefully designed to coat tongues in color the same way regular Cheetos stain fingers. There was also an element of snack roulette in that it was random chance whether the coloring was blue or green.

Michigan-based multimedia artist Jason DeMarte captured the Cheeto Puff in its most unnatural habitat, a scenic prairie. He's also created naturalistic odes to bacon and fried chicken, so paint isn't the only oil he likes to use on his the canvas.

Cheetos popcorn is supposedly in development

Be on the lookout for it at a movie theater near you!

You can make Cheetos waffles at home with this recipe

Say goodbye to a balanced breakfast and hello to Cheetos waffles. 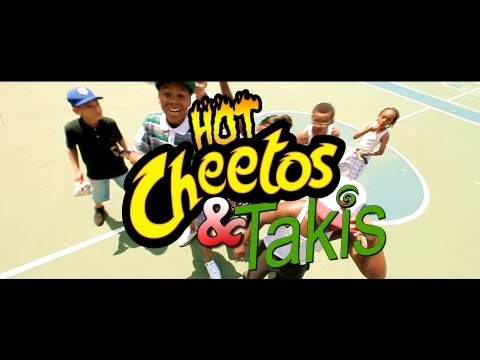 With some help from an extracurricular hip-hop class, a crew of adorable Minneapolis preteens took the Internet by storm in 2012 with perhaps the most infectious snacking anthem ever written. It earned the kids an endorsement deal from Kmart in 2013 and although they've been dormant since, Da Rich Kidzz surely earned enough cheddar to keep their paws orange for life.

The world's largest Cheeto almost sold for a million dollars

In 2013 Navy Petty Officer Mike Evans ripped open a bag of Cheetos purchased for his son and found a massive Cheeto suffering from a severe case of what Frito-Lay diagnosed as “seasoning accumulation." Evans put the giant Cheeto on eBay and bidding skyrocketed to over a million dollars before eBay shut the auction down due to fraudulent bidders. Instead of cashing out, Evans donated the Cheeto to a small Iowa town that displayed it in a Plexiglas case and marketed it as a tourist attraction.

Dan Gentile is a staff writer at Thrillist. He once filled a rolling paper with Cheetos, while sober. Follow him to more stories of snack food addiction at @Dannosphere.